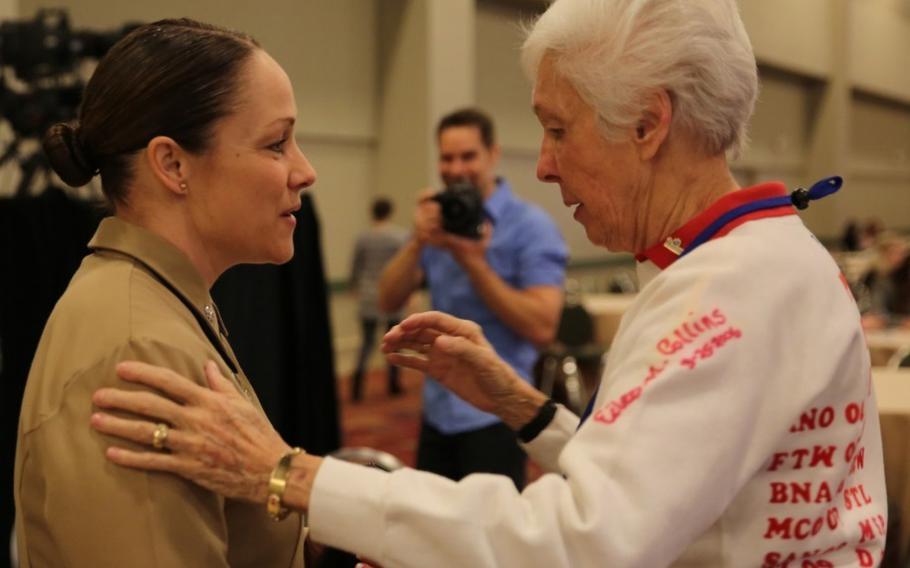 She couldn't see or hear. There was nothing to taste or smell. When she patted the 8 feet of water surrounding her, she didn't feel it.

By the time Funk endured those circumstances for 10 hours and 35 minutes in 1961, she had already taken at least 87 other exams ranging from swallowing three feet of rubber hose to guzzling a pint of radioactive water. It was all in service of becoming one of the first female astronauts at a time when American women still needed their husbands' permission to sign a mortgage and get a credit card.

Within months, Funk's dream was squelched. NASA had no program for female astronauts, she learned in a perfunctory telegram. Without that federal support, her privately funded testing program would end.

Funk, 82, finally saw her aspiration come to life Tuesday when she launched on aerospace manufacturer Blue Origin's first crewed spaceflight alongside billionaire Jeff Bezos and two other people. Exiting the spacecraft after landing, she grinned and spread her arms wide in celebration. (Bezos, the founder of Amazon, owns The Washington Post.)

Funk's journey to this milestone began in 1960, when she read in Life magazine that a female pilot named Jerrie Cobb was undergoing sensory deprivation testing to see how women's bodies would hold up in space.

"So [I was] thinking, 'Oh! This is really what I want to do!' " Funk told Margaret Weitekamp for her book "Right Stuff, Wrong Sex: America's First Women in Space Program." "I mean, there weren't a lot of things back in the sixties for girls to do."

Already an accomplished pilot, Funk wrote to the doctor running the tests and volunteered to participate. He referred her to Randy Lovelace, another doctor helping examine potential male astronauts for NASA's Mercury program. At the time, space-travel jobs required experience as a military pilot — a type of service for which women were ineligible.

Lovelace began thinking about also studying women's fitness for space travel in 1959 while he was attending an aviation conference in Miami. Lovelace and Air Force Brig. Gen. Donald Flickinger started to wonder how women would physically handle being in space, Funk wrote later. The Cold War was on the horizon, and Flickinger had heard that the Soviet Union was preparing to send a woman into space. If the United States wanted to do so first, it would have to move quickly.

There were also practical reasons for their curiosity. Lovelace was a visionary who imagined orbiting space stations with astronauts researching unexplored areas of the universe, Weitekamp, a curator at the National Air and Space Museum, told The Washington Post. But she said Lovelace was also a product of his time who thought the stations would need to fill "women's jobs" — secretaries, nurses and telephone operators.

Speculation that women's bodies might be better adapted to space than men's added to the intrigue, Weitekamp said. Women tended to eat less, need less oxygen, have fewer heart attacks and be physically smaller.

Cobb, a pilot, became the first woman to put that thinking to the test. When she performed well on the same tests as the male astronauts, Lovelace compiled a list of eligible women to continue the experiment. The women needed to be under 35 and in good health, and have completed more than 2,000 hours of flying, among other qualifications, Funk wrote.

Funk reached out to Lovelace and soon became one of 25 women undergoing strenuous physical and psychological tests as part of the Women in Space Program in Albuquerque. While the women took the same tests as NASA's male astronauts, NASA did not sponsor Lovelace's endeavor.

The intensive battery of tests spanned five days. Funk, the youngest woman, ranked third. Although the women who passed became known as the Mercury 13, most didn't meet at the time.

Lovelace's program didn't come with a promise of becoming an astronaut. Still, Weitekamp said, everyone interested in space travel knew Lovelace was closely linked to NASA's attempts at space travel.

"If you talked to him," Weitekamp said, "it would have been very easy to get swept up in the excitement of what was possible and not have spent quite as much time and attention on when that might happen and how that might happen."

In September 1961, the Mercury 13 were preparing to go to Naval Air Station Pensacola in North Florida for a third round of tests. Cobb wrote to her fellow aspiring space travelers about their upcoming chance to meet. She began the letter: "Dear Fellow Lady Astronaut Trainee," branding the women "FLATs."

Then the initiative came to an abrupt halt, Weitekamp said. The project was canceled, and the women could return to the rest of their lives, Lovelace's administrative staffers told Funk and the others in a short telegram. They gave little explanation.

"Increasingly with retrospect, one sees the injustice done particularly to these women — that they were very capable pilots and talented physically in a moment when the United States, whether in the space program or otherwise, just didn't have the capacity to recognize or reward that," Weitekamp said.

It eventually became clear that NASA didn't have a testing program for women, and the military was unwilling to let Lovelace use its facility. Few people advocated for female astronauts, Weitekamp said, including Vice President Lyndon B. Johnson, who was generally viewed as an advocate for women. When his assistant wrote a letter for him, asking NASA about moving forward with the women's training, he refused to sign it, Weitekamp said.

In congressional hearings the next year, NASA officials testified that they were focused on landing a man on the moon by the end of the decade, as President John F. Kennedy had ordered. The agency had no capacity to pursue additional goals simultaneously.

"I think this gets back to the way our social order is organized really. It is just a fact," he testified, according to Popular Science. "The men go off and fight the wars and fly the airplanes and come back and help design and build and test them. The fact that women are not in this field is a fact of our social order."

Funk was undeterred. She found her own opportunities to take more exams, including a high-altitude test, a seat-ejection exam and a centrifuge test that simulated the gravitational forces of liftoff and reentry. Funk remained convinced that she would make it to space someday.