WASHINGTON (Tribune News Service) — If the president fumbles the nuclear football, is the military prepared to recover it? Pentagon Acting Inspector General Sean O’Donnell is investigating following a number of security lapses in recent years.

The Presidential Emergency Satchel, also called the nuclear football, the button or just the football, is a briefcase that holds nuclear launch codes, among other secret technology, that enables the president to authorize a nuclear strike. Typically, an aide to the commander in chief carries the satchel and accompanies the president any time he is away from the White House.

But the security of the satchel has come into question recently.

Pence’s football was inactive — the backup only functions when the president is dead or incapacitated — but had the rioters seized the satchel, sensitive equipment used to communicate with the Pentagon would have fallen into their hands.

In February 2018, a skirmish over the football broke out during Trump’s visit to Beijing when Chinese officials blocked the aide carrying the football from joining the rest of the president’s staff in an auditorium where Trump was due to meet with Chinese President Xi Jinping.

According to reporting from Axios, the U.S. officials forced their way through and the scuffle was over “within seconds.”

A year earlier, in February 2017, a member of Trump’s exclusive Mar-a-Lago club identified as “Rick” posted a photo of himself on Facebook with the aide who was carrying the football at the time, raising security concerns.

The football, born out of Cold War fears of a nuclear attack against the U.S., has traveled with every president since Dwight D. Eisenhower.

According to an announcement from the inspector general, the review will examine procedures should the satchel be lost, stolen or compromised. 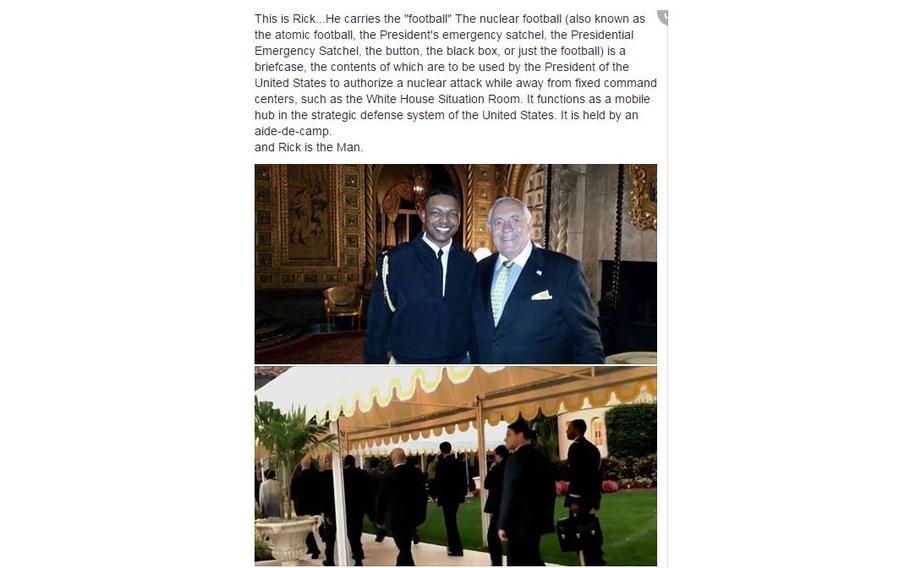 In February 2017, a member of Trump’s exclusive Mar-a-Lago club identified as “Rick” posted a photo of himself on Facebook with the aide who was carrying the football at the time, raising security concerns. (Facebook screenshot)