‘I gave these people 110%’: Fort Lee barber strike continues, no word from contractor 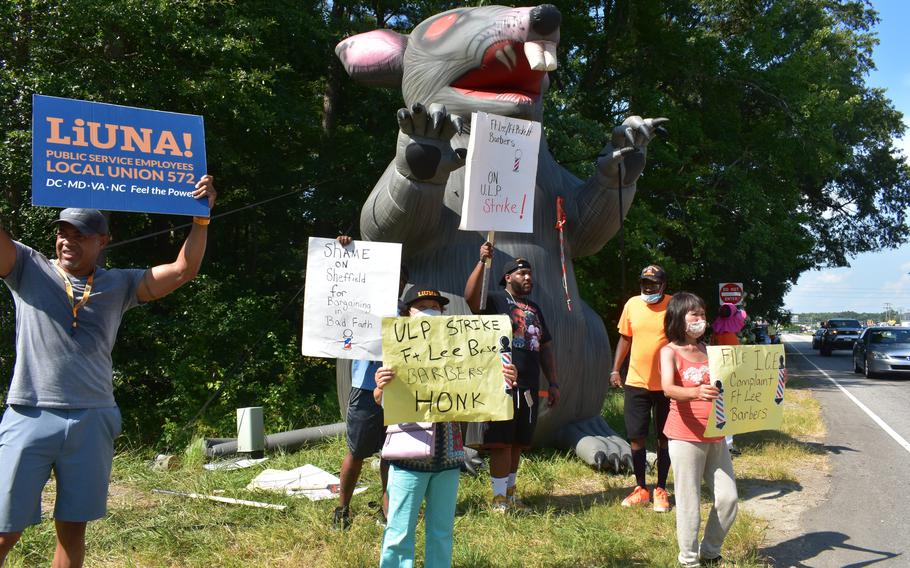 Barbers from Fort Lee shops picket in front of the Sisisky Gate at Fort Lee, Va., on June 16, 2021. They say they are being underpaid by the contractor that manages their operation. (Sean Jones, The Progress-Index/TNS)

FORT LEE, Va. (Tribune News Service) — Fifteen barbers got together to picket outside of the Sisisky Gate on Friday. It had been 12 days since they started an unfair labor practices strike against Sheffield Barbers, and they were yet to hear anything from the contractor about meeting their demands.

They stood outside the gate with signs that read “on U.L.P strike,” “File I.C.E Complaint Ft Lee Barbers” and urging people to honk in support.

Seemingly every minute, a large truck driving past would take them up on the offer and lay on its horn for several seconds as it rolled past.

About 20 barbers organized under LiUNA Local Union 572 are striking against Sheffield Barbers for allegedly underpaying them. The barbers have historically made 55% of the sticker price for a haircut at the base’s three barber shops — plus one at Fort Pickett.

Barbers say that once Sheffield was awarded the contract for those facilities, it started giving barbers 55% of $11.25, the price from 2017, while at the same time increasing the actual cost for a haircut to $13.

One picketer, Matt Macklin, retired from the barber shop on base after working there for 48 years. He said he heard about the wage fiasco when he was at a funeral. One of the other attendees say they would be picketing and asked if he wanted to join.

Throughout his decades of cutting hair, Macklin came to know his fellow barbers as family. Often times you would stand next to the same barber for 16 years. It’s a barber shop that is known for its longevity. Once a barber is there, they usually work there for life. He wanted to show support for the institution he came to love.

“I don’t like the way they’re treating these guys,” Macklin said.

Many of the barbers at the base’s shops have been civilians their entire lives, but Eugene Harris served for 21 years before becoming a barber. He was deployed to Iraq and Kuwait before ending his military career.

Army Regulation 670-1 sets the standard for Army uniform and appearance, including grooming policies.

Ar670-1 says that soldiers should take pride in their appearance. While many hairstyles are allowed, they must be “neat and conservative,” per the regulation. Male haircuts cannot drop below the eyebrows or touch the collar. Longer female hairstyles must be fastened above the lower edge of the collar and also avoid dropping below the eyebrows.

One specific line addresses hair that doesn’t part naturally. The regulation says that soldier with this type of hair can style their hair with only one part and that it has to be a completely straight line.

These are standards that Harris says he is intimately familiar with, and can ensure that soldiers at the base are adhered to.

Since Sheffield Barbers first got their contract just before the COVID-19 pandemic shut down shops across the country, Harris said that many of their customers have been aware that their barbers’ pay situation, which puts them in an awkward position.

“It’s kind of hard because it makes customers want to tip more, and they shouldn’t have to make up for what the contractor isn’t doing,” Harris said. “They try to compensate for that. It’s not fair to put that on soldiers, they don’t make much money in the first place.”

The barbers are arguing that the increased haircut prices, mixed with their decrease in pay means the contractor is pocketing a sum of extra cash rather than focusing the revenue on its people. One customer says that is a huge mistake.

Kevin Philips is retired Army veteran who has been working and getting his hair cut at Fort Lee for the past six years. He says he won’t go back to the shop at Fort Lee until the dispute is settled in favor of the barbers.

“I even called the contractor to express the relationship that we have,” Philips said. “I’m just not willing to go back there and start all over with someone else at this particular point.”

That relationship is what he says he will miss most of the base’s barbers don’t have their demands met, and decide to leave.

“A barber is a stylist; they know what you want. You don’t have to explain how you want your cut. But you also establish a personal relationship with them as well. I know about his family, he knows about mine,” Philips said.

Now in management for an agency at the base, Philips added that losing these barbers would be a terrible mistak because they’ve become an institution, with a number of barbers that are longtime employees.

“People think you can just slide one thing in and slide it out. It takes a whole rebuilding process. In my mind, [Sheffield] is doing [itself] a disservice because the barbers have a known product that has been producing for years,” Philips said. “I don’t think they see that loss, it’s going to be a loss.”

Currently, temporary barbers have been hired in the place of those that are going on strike. Sheffield Barbers is also advertising for barbers on Indeed.com. The listing says it is seeking 8-10 people and offering a pay rate of “up to” $70 and hour. The barbers say that is well above the compensation they are asking for.

While striking, many barbers have been going completely without a paycheck. One barber, Mike Kates, has been cutting hair for many of his former clients while also advertising for more customers on social media to help make ends meet. Kates said it feels like a waiting game, with Sheffield just waiting to see how long the strike is going to last.

One of the base’s newer barbers, Delvon Jackon, is one of the barbers going without a paycheck. He said unless the pay is reinstated to 55% of the sticker price, he won’t go back to work at Fort Lee.

“I gave these people 110% and it only makes sense that you would treat your employees right,” Jackson said.