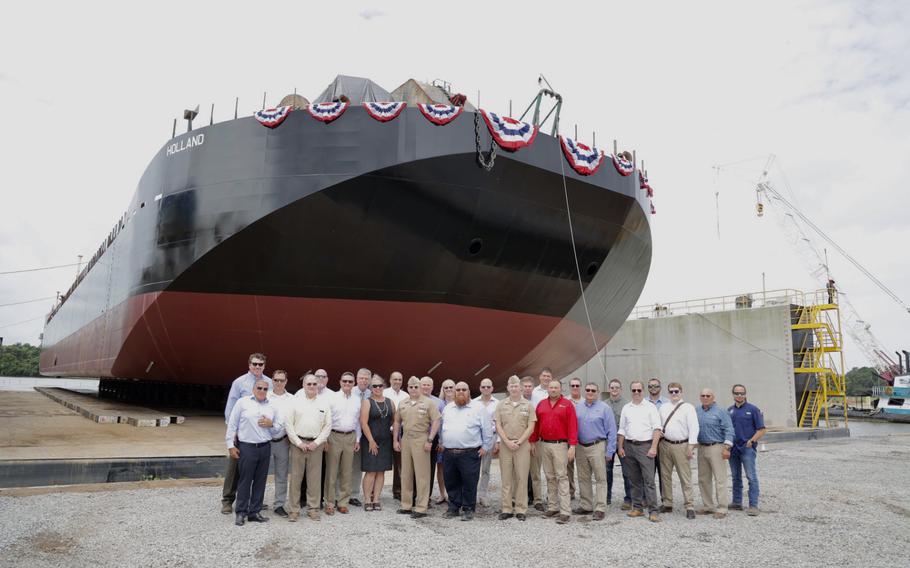 (Tribune News Service) — Lockport, La.-based Bollinger Shipyards has christened an ocean transport barge that will be used to construct the U.S. Navy’s newest class of submarines.

The Holland, a 400-by-100-foot barge christened Saturday at the company’s Amelia yard, will support construction and maintenance of the Navy’s Columbia class ballistic missile subs.

Bollinger will deliver the barge to General Dynamics Electric Boat, the New England-based company that contracted with the local shipyard in late 2019 to build the vessel. A contract cost was not disclosed.

“ Bollinger Shipyards is pleased to partner with General Dynamics Electric Boat to help meet the expanding needs of the United States’ Navy,” Bollinger President and CEO Ben Bordelon said in a news release Monday. “We believe that in order to build 21st century American vessels, it requires 21st century American tools and equipment manufactured right here in the United States. The Bollinger management team and our skilled workforce are proud and look forward to continue supporting the efforts to modernize our nation’s fleet.”

General Dynamics Electric Boat is the lead contractor for design and construction of the nuclear-powered Columbia subs, which will replace the aging Ohio class. Construction on the first sub is expected to begin this year, with delivery to the Navy expected in 2027.

The Columbia class subs, 560 feet long with a displacement of nearly 21,000 tons, will be the largest ever built by the U.S, the company says. Each sub has tubes to launch 16 nuclear missiles.

The Navy estimates the lead sub, the first of 12 planned, will cost $15 billion, including $6.5 billion for design, planning and engineering and $8.5 billion for construction, the Congressional Research Service says in a June 24 report on the program. Costs will decrease for subsequent subs, and the Navy estimates all 12 will cost a combined $109 billion.

Concept and design for the Holland was performed by the Bristol Harbor Group in Rhode Island. Bollinger completed the detail design and engineering at its Lockport shipyard and construction at the its marine fabrication facility in Amelia.

Bollinger landed a separate contract with General Dynamics Electric Boats in September to build a floating dry dock that will be used to construct and maintain the Columbia subs at the Groton site.

In June, the local shipbuilder landed a contract to do preliminary design work on an amphibious ship for the Navy. The Light Amphibious Warship, or LAW, is a new class of vessel the Navy hopes to begin building in 2023.