Boeing drops as it cuts 787 target, expands search for flaws 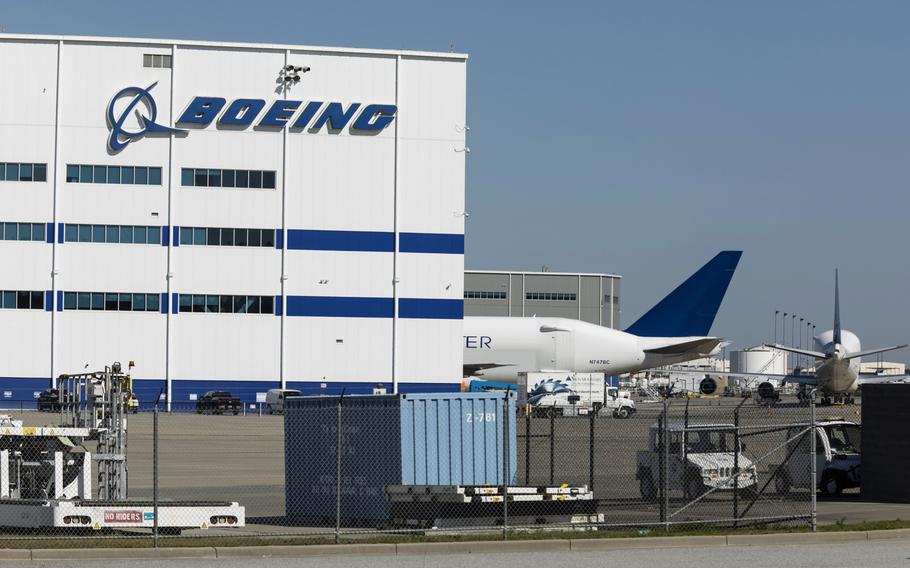 The Boeing manufacturing facility in North Charleston, S.C., on May 4, 2020. (Sam Wolfe/Bloomberg)

Boeing slumped after the planemaker said it would deliver fewer 787 Dreamliners this year than originally planned as its mechanics expand their inspections for tiny structural flaws in the jets amid a temporary grounding.

The Chicago-based planemaker now expects to hand over fewer than half of the 100 or so Dreamliners stashed in the desert and around its factories, Boeing said in a statement Tuesday. Executives had previously said a majority of the 787 jets in inventory would be delivered this year.

The manufacturing flaws that have disrupted deliveries since late last year continue to weigh on the 787 program and Boeing’s own financial turnaround. The company has found wrinkling in another area, the forward pressure bulkhead in the jets’ noses, as it works with U.S. regulators to restart 787 deliveries. The issue isn’t considered a threat to flight safety, a company spokesman said.

Boeing plans to slow work in its North Charleston factory for a few weeks and reassign additional workers to inspect and repair the carbon-fiber jets for gaps that are larger than the width of a hair, the spokesman said.

“The issues with the 787 compound the existing uncertainty around Boeing’s delivery profile heading into 2022, and therefore its cash flow,” Robert Stallard, an analyst at Vertical Research Partners, said in a note to investors. “This again gives the impression that Boeing has not got its house in order.”

Greg Smith, who retired as Boeing’s chief financial officer last week, warned in April that lowering 787 output below the current pace — five jets manufactured a month — could erode margins and place the program in a reach-forward loss.

The Federal Aviation Administration is also reviewing the analysis Boeing used to create a methodology to determine where to hunt for the imperfections, a time-consuming process that involves ripping out cabin equipment. The tiny dimples are found in the inner lining where the fuselage barrels are fused to form the 787’s frame.

The FAA said in a statement Monday in the U.S. that is aware of a manufacturing quality issue near the nose on certain 787 Dreamliners in the company’s inventory of undelivered airplanes.

“This issue was discovered as part of the ongoing system-wide inspection of Boeing’s 787 shimming processes required by the FAA,” according to the statement. “Although the issue poses no immediate threat to flight safety, Boeing has committed to fix these airplanes before resuming deliveries. Based on data, the FAA will determine whether similar modifications should be made on 787s already in commercial service.”

Boeing halted deliveries in May while the work is under way, although it handed over a 787 to Turkish Airlines in June that had already been cleared by regulators.

The Dreamliner’s travails overshadowed otherwise robust sales totals for the month. Boeing booked 219 gross orders in June, its highest tally in three years. Over the first six months of the year, the company landed 599 gross orders and 267 net sales after cancellations and an accounting provision involving at-risk deals.

Boeing delivered 45 aircraft in June, including 33 of its 737 Max jetliners. The aviation titan has handed over 156 jets so far this year, one shy of its total 2020 shipments.