Employees at the Department of Veterans Affairs hospital in Tuscaloosa, Ala., are mourning the loss of Dr. Gary Cohen, a psychiatrist at the hospital who was found dead last week at the site of the collapsed condo building in Florida.

Cohen’s body was recovered July 7 from the debris at Champlain Towers South in Surfside, Fla. He was laid to rest in Birmingham on Sunday, according to the VA.

The building, a 12-story beachfront condo building outside Miami, partially collapsed at 1:30 a.m. June 24. Cohen is among the 95 people confirmed dead.

Cohen, 58, had worked as a psychiatrist at the Tuscaloosa VA Medical Center since 2009.

“Dr. Cohen will be missed by our veterans and staff,” John Merkle, director of the medical center, said in a statement. “Our facility mourns the loss of one of our own and our thoughts and prayers continue to be with those who knew and loved him.”

Cohen had traveled to Florida to visit his ill father, according to WIAT-TV, a CBS-affiliated news station in Alabama. He was staying with his brother, who had a condo on the 11th floor of Champlain Towers South. His brother’s remains have not been recovered.

“Dr. Cohen leaves a big hole in our specialty clinic,” Lisa Koontz, a chief nurse of specialty care, was quoted as saying. “It is like losing a family member.”

One colleague, Dr. Michael Shortall, associate chief of staff for specialty care, recalled how Cohen would connect to his patients and ease their anxiety by starting appointments with a game of “Name that Tune.”

At the Tuscaloosa VA, coworkers adorned his office door with a wreath, as well as written prayers and condolences. Staff members designed a commemorative token that employees will carry in his honor. The medical center is also planning a memorial service later this month. 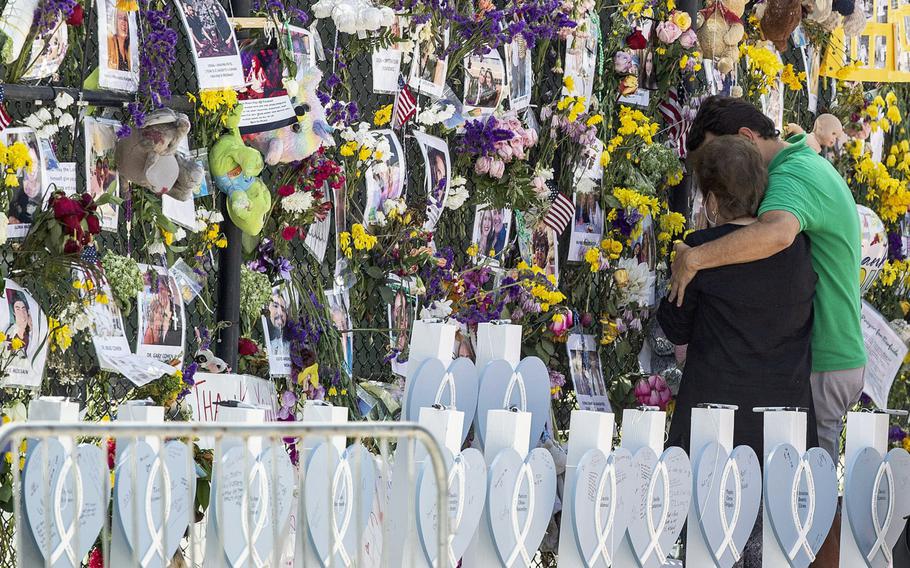 People mourn at the memorial wall for the victims of the Champlain Towers South collapse, in Surfside, Fla., on July 8, 2021. (Pedro Portal, The Miami Herald/AP)
Nikki Wentling