Everything was going wrong in his life, but then an Air Force veteran won DC’s vaccine lottery 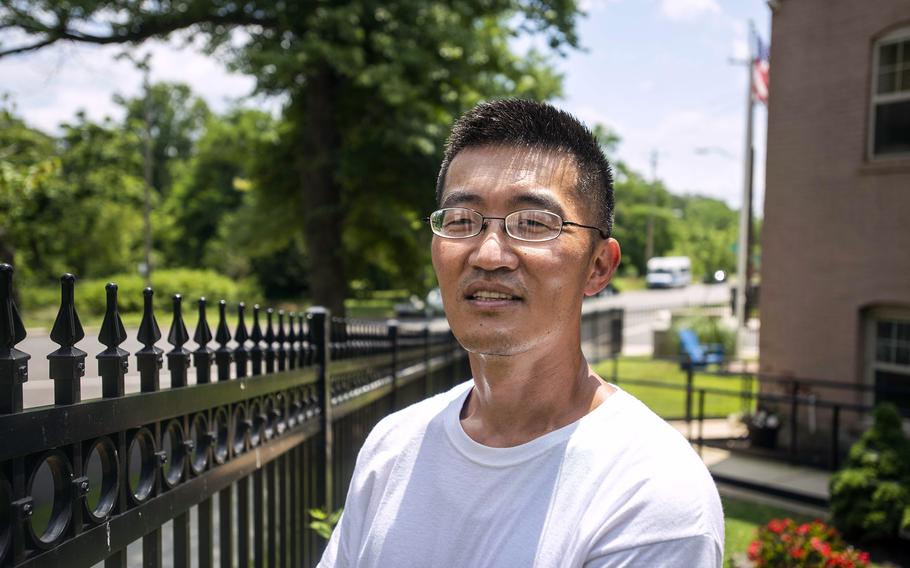 Sung-ha Jou, who lost his job, his home, his belongings and his van during the pandemic, saw his luck turn around when he won a year's worth of Metro rides as part of Washington, D.C.'s coronavirus vaccination lottery. (Amanda Voisard/for The Washington Post)

WASHINGTON — For Sung-ha Jou, a 44-year-old Air Force veteran, one disaster kept leading to the next during the coronavirus pandemic. He lost his job during the early weeks of the pandemic, then eventually his home, his van and his other sources of support. By the time coronavirus vaccines became widespread, Jou was arriving, destitute, at a D.C. homeless shelter.

Meanwhile, the District of Columbia was putting in place an initiative that several states and cities across the country have tried: lotteries with big-ticket prizes, including in D.C. a free car and $10,000 grocery store gift cards, to induce reluctant residents to get their coronavirus vaccines.

On his first day at the shelter, Jou got a vaccine. And this week, he learned to his great surprise that he had also won the lottery.

His prize: a year of free rides on the D.C. Metro system.

He says it’s a boon that he badly needed, and one that will help him travel to medical appointments, social services and other important outings as he gets back on his feet while pursuing employment and housing.

“This is literally God-sent. I am so grateful for this,” Jou said. “It’s just out of nowhere. When I thought everything was going wrong, this really helped me out.”

Winning the lottery was, at long last, a small bright point in a year-plus of accumulating disasters for him. Five years after he retired from a 15-year career in the Air Force, Jou was working as a mechanic at a car dealership in Centreville, Va. when the pandemic struck. Business at the dealership slowed to a trickle during the first weeks of social distancing. Jou was furloughed, then eventually realized his job was never coming back.

Serving in the military had been a priority of his since he emigrated from South Korea to California as a teenager and became a U.S. citizen. But his service left him living on the East Coast, far from family and friends who might have helped him out. He saved up money from his unemployment checks and used it to start up his own business: He bought a van and established himself as a mobile mechanic, driving around Virginia to do oil changes and make car repairs.

With the expenses of a fledgling business, he was stretching to pay his rent; he put a bed in the van and moved in. Sung-ha Jou shows the message he received from the D.C. government, informing him he won the vaccination lottery. (Amanda Voisard/for The Washington Post)

“It was OK. I managed for a while. Until the car broke down and I didn’t have the money to fix it,” he said. One blow followed another — someone broke into the van, stealing Jou’s tools that he used for his mobile mechanic business. His food stamps expired and he struggled to complete the paperwork to start them again. He ran out of money to buy groceries and water.

“It was really, really rough,” he said. “That’s when I really became aware of some of my mental issues, the PTSD issues that I had either ignored or was too proud to admit to ... I spent a lot of time in my car by myself.”

Last month, his van was repossessed. He slept on the street for a few days, until he passed out on a hot day. An ambulance took him to a hospital, where he explained his recent struggles to a woman working at the front desk. She and some friends pooled the money to order him an Uber to a D.C. homeless shelter.

While he was living in his van, Jou had heard about the coronavirus vaccine, but had decided it would be too risky to get it: What if he had a bad reaction, and nobody knew because he was alone in his van without someone taking care of him?

The day he got to the 801 East Men’s Shelter, that changed. He would be staying in a room full of other homeless men, where he feared he could catch the virus. “I immediately said, ‘I need a vaccine now. I’m with a group of at least 100 people.’ ” The RISE Demonstration Center, which is located on the same sprawling St. Elizabeths campus as the shelter, was offering shots; he walked over and got his that day.

Unbeknownst to Jou, the RISE Demonstration Center is one of three vaccine clinics where the District has offered $51 gift cards since late June to every person who gets their first shot there. More than 70% of D.C. residents old enough for the shots have gotten a dose, but residents east of the Anacostia River are the least likely to have been vaccinated. The prizes at the three east-of-the-river clinics are an attempt by D.C. leaders to boost those rates.

Patients at those three sites can also enter lotteries to win prizes, including grocery and Metro gift cards.

Anyone who was vaccinated at the three sites from June 19 onward will continue to be entered into drawings for the next three weeks to win three more cars, six more grocery gift cards and other prizes.

City leaders have publicly debated whether the vaccine lottery works to convince people to get a shot. Some have wondered whether high-dollar lotteries could backfire, leading people already skeptical of the shots to wonder whether the city has ulterior motives in offering cash giveaways. But Donahue and others say that all approaches to getting reluctant people protected from the virus are worth trying.

“I had no idea” that there would be a lottery at the vaccine clinic, Jou said. “They said, ‘Would you like to be entered into this free prize raffle?’ I said, ‘Sure, why not? I’d take anything free right now.’ I didn’t even remember it. When they called me (to tell me I’d won), initially I thought it was some sort of scam.”

Jou says that the day in June that he got his shot was one of his bleakest days. “When I first got to the shelter, I was very dejected, and I was feeling very hopeless. Everything I had is gone. And I just had no idea how to get back on my own two feet again,” he said.

Now he is more hopeful. After two weeks in the shelter, he moved with help from a veteran’s hotline into a transitional home in Southeast Washington for veterans seeking permanent housing, where he has his own room and professional help. He is working with a mental health provider, who is also helping him reapply for food stamps.

All of those appointments — from medical visits to trips to Veterans Affairs for assistance — used to mean long journeys on foot. Most days, he walked miles in D.C.’s muggy summer heat from the shelter in Congress Heights across the high-traffic 11th Street Bridge into the parts of the city west of the Anacostia where he had his appointments.

Thanks to the vaccine lottery, he can now ride Metro trains and buses free. “How did they know I needed this?” he marvels.

Soon, he said, he hopes he’ll find a job in D.C. He can’t wait to take the Metro to work.