Federal authorities said Sunday that there is no reason to suspect terrorism or a threat directed at Major League Baseball’s All-Star Game after three men were arrested Friday in an illegal-weapons probe at a hotel blocks from the stadium hosting the event.

“We are not aware of any threat to the All-Star Game events, venues, players, or the community at this time,” the FBI Denver office said in a Twitter post.

Authorities have released sparse details about the incident at downtown Denver’s Maven Hotel near Coors Field, where celebrations are starting ahead of Tuesday’s All-Star Game.

Officers responded to the Maven after receiving a report of a “suspicious incident,” the Denver Police Department said in a news release, and obtained search warrants for two rooms, where they gathered evidence. They also impounded two cars.

A woman, Kanoelehua Serikawa, 43, was arrested and being investigated on suspicion of possession of a controlled substance with intent to distribute. There was also a warrant for her arrest from another jurisdiction.

“The investigation and arrests were the result of a tip from the public, serving as an excellent example of the critical role the community plays in public safety,” the police department said in a statement. “DPD encourages residents and visitors to always be aware of their surroundings and to report suspicious or illegal activity to police immediately.”

The police department declined to provide any additional information, including whether it had identified a potential motive. Hotel representatives did not immediately respond to a request for comment.

The Denver7 television station reported that a maid at the hotel contacted authorities after discovering more than a dozen weapons and a thousand rounds of ammunition inside one of the rooms.

Drake Voell, who was staying at the hotel, told the local TV station Fox31 that staff told guests to remain in their rooms as authorities investigated.

“Once I got up to my room the hotel phone started ringing,” he said. “I answered, and they said for everyone to stay in their room because there was a situation. I asked what was going on and they said there was just a few people that were up to no good on the fourth and the eighth floor.”

Denver Sheriff Department records show the four people arrested were booked into jail Saturday. They were due to appear in Denver County Court on Sunday. 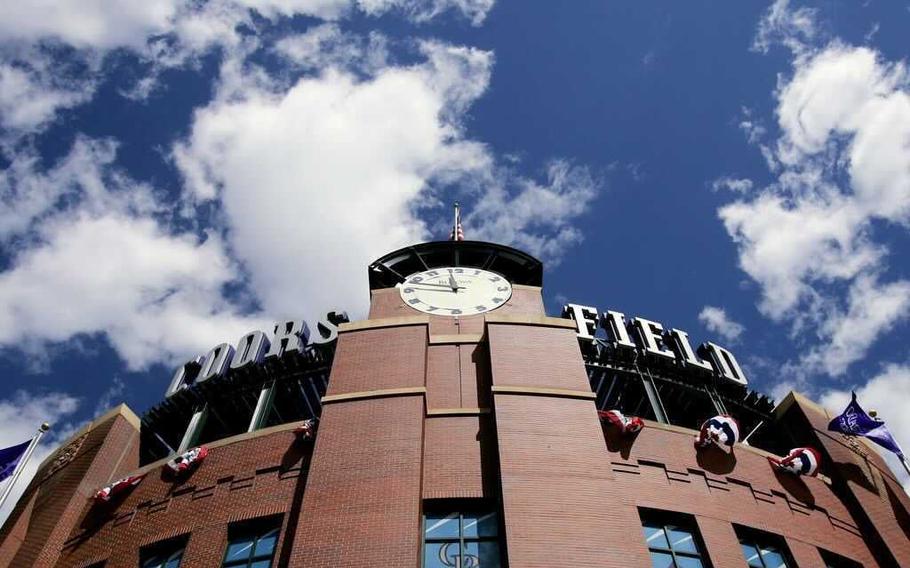 Coors Field in Denver, the host of the 2021 MLB All-Star Game. (Facebook)