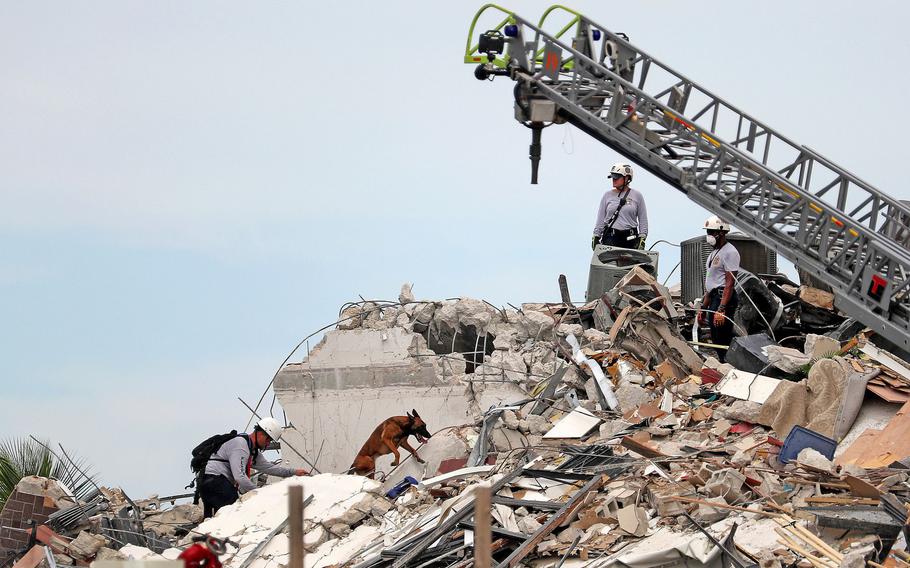 MIAMI (Tribune News Service) — First responders continuing the search and recovery mission in the debris of the collapsed Surfside condo tower on Saturday morning worked through a thunderstorm that brought heavy downpours and strong wind gusts at times.

The recovery effort — which overnight uncovered seven more bodies from the rubble of the Champlain Towers South — briefly paused at 7 a.m. after a lightning strike, and inclement weather is expected the rest of the day.

The grueling, gut-wrenching task of finding victims went on as police-escorted trucks carrying debris from the site were seen on the Julia Tuttle Causeway and the Florida Turnpike earlier in the day. The death toll in the partial collapse of the Champlain Towers South now stands at 86, Miami-Dade County Mayor Daniella Levine Cava told reporters Saturday morning.

There are “potentially” 43 people still missing following what may be the worst building failure in U.S. history, Levine Cava said. “We can only truly account for a missing person who is deceased once an identification is made.”

Officials are still working on making the missing list as accurate as possible, by cross-referencing addresses from the U.S. Postal Service, driver’s license records and the condo building roster.

Saturday’s work continued in efforts to recover the bodies of victims in the rubble of the oceanside condo building, which partially collapsed at 1:30 a.m. the morning of June 24.

The pace of finding victims has increased substantially since the demolition of the remaining part of the building nearly a week ago, as rescue workers access a wider area. Significant removal of the debris pile has freed up the space for rescuers to search areas they couldn’t get to before.

Surfside Mayor Charles Burkett told media Saturday that the pace of the operation makes it “very likely that the site will be clear sooner than expected.”

“The progress there remains intense,” he said. “Much of the original pile is at ground level or below. “

Miami-Dade Fire Chief Alan Cominsky said he didn’t have a timeline for when the site will be cleared.

Burkett said the pace of work at the site is creating “a significant amount of dust” despite the rainy weather.

There are two different operations underway, Burkett explained. The first is the recovery effort to find victims at the original collapse site. The second is rubble removal process around the section of the building that was demolished last Sunday.

Construction sites are usually required to have a dust control plan, a spokesperson for the Department of Regulatory and Economic Resources for Miami-Dade County told the Miami Herald last month.

At construction sites, silica dust in the air is a common hazard. When silica particles are inhaled, they can cause irreversible lung damage, according to OSHA.

Levine Cava said Saturday that hazardous material technicians are “constantly sampling and monitoring” the air quality at the site, and all first responders working on the debris pile and in the surrounding areas are wearing proper protective gear, including masks.

When workers come off the debris pile, they are sprayed clean so as to avoid cross contamination.

“As you can see, the debris pile is enormous,” Tony Trim, of Miami-Dade Fire Rescue’s Florida Task Force 1 Urban Search and Rescue Task Force, said in a video posted on the fire department’s Twitter Saturday. “There are 150 workers breaking and breaching concrete and steel.”

The video panned to workers using hand-picks and small tools to work through the debris, and then showed a line of workers in a staging area, wearing pink respirators.

The mayor said the crews are monitoring asbestos levels, but that none has showed up in tests.

In the Miami-Dade Fire Rescue video, Trim narrates as bulldozers and cranes lift colossal chunks of debris off the pile. The concrete piles are dense, with iron and other material strewn throughout, and workers on top of the pile are dwarfed by the sheer amount of material.

In front of the site, hand tools sit in charging stations powered by generators, and are frequently changed out as batteries die. Pallets that line the street near the collapse site are stacked with rebar cutters, chipping hammers and electric saws.

“The size and scope of this operation, along with the large amounts of concrete and steel that we have to move ... there’s no way humanly possible that we can move all of it without this heavy-duty equipment,” Trim said.

Riviera Beach Fire-Rescue firefighters Elizabeth Hautamaki and David Morrison finished their first shift Saturday afternoon. While first responders up until now have been working in a search and rescue mode, they have only been concentrating on finding the dead.

“I really don’t know how to explain it,” Hautamaki said.

Morrison said the experience has been unlike anything he’s come across over the course of his career.

As they were finishing their shift, they were met by members of the Lutheran Church Charities Confort K-9 Ministries from Northbrook, Illinois, who had emotional support golden retrievers with them for the firefighters to pet.

“They are trained to remain really calm in every situation,” said Bonnie Fear, response coordinator for the group. “and, their vest says, ‘please pet me.’ So, that’s an invitation to pet them and either cry or release their emotions.”

The rain Saturday also didn’t keep people away from the growing memorial wall set up to honor victims of the building collapse on Harding Avenue. Flowers, candles, written prayers and inspirational messages and photographs are added to the wall every day.

Cyclists, joggers and other well-wishers stopped to pray, observe a moment of silence and to deliver more items to the memorial.

Michelle Toussaint drove down from Boynton Beach Saturday to place a laminated prayer to St. Francis of Assisi, the Catholic Church’s patron saint of animals, in memory of all the pets that were lost when the building fell.

“I’ve been a huge pet lover all my life. I have a dog that I rescued almost 11 years ago, and he’s my world,” Toussaint said. “And, I think what hits me about the pets is they are family. You hear a lot of people who say, ‘Why would they want to rescue pets? they’re just pets.’ And they’re not. That’s their family.”

Toussaint said she was inspired to make the trip to Surfside after hearing news that rescuers found a surviving family’s cat, Binx, on Friday.

“It’s a miracle. It’s a total miracle, and that’s going to help that family get through this,” Toussaint said. “So, I wanted to come down here and pay my respects, not only for the people, but for the pets too.”

Meanwhile, Dallas, Texas-based artist Roberto Marquez continued work on an untitled mural that is around 10 feet tall and spread over nine canvases. Marquez, who arrived in Surfside on June 28, worked throughout the storm Saturday, painting underneath a blue tarp.

“I need to finish it regardless,” he said.