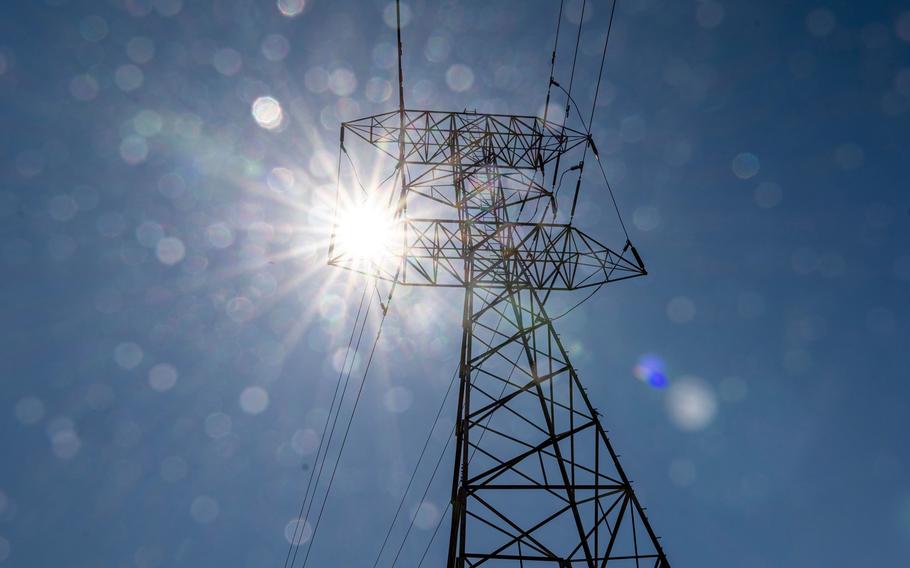 High voltage power lines in Pinole, Calif., on June 17, 2021. California and neighboring states are facing another historic heat wave that may push power supplies to the brink and is adding to already high wildfire risk amid record drought. (David Paul Morris/Bloomberg)

California and neighboring states are facing another historic heat wave that may push power supplies to the brink and is adding to already high wildfire risk amid record drought.

Temperatures will hit 107 degrees Fahrenheit Friday in Sacramento and 112 Saturday, according to the National Weather Service. Excessive heat warnings cover most of California and parts of Nevada, Oregon, Idaho, Utah and Arizona.

“The heat wave will pretty much peak today through Sunday,” said Lara Pagano, a senior branch forecaster at the U.S. Weather Prediction Center. “By the time we get into Monday and Tuesday things will be improving but they are still going to be toasty.”

The fresh round of heat comes just days after records toppled across Oregon, Washington and British Columbia and authorities attributed hundreds of deaths to extreme weather seen as the latest evidence of climate change. Californians are again being asked to ease their power consumption in coming days, and the state has also asked for greater water conservation.

The California Independent System Operator, which runs most of the grid, issued a statewide alert asking consumers to voluntarily cut back on power use from 4 p.m. to 9 p.m. local time. Supply challenges are mounting less than a year after a heat wave forced the state’s first rolling outages in two decades, and meeting demand is expected to be tougher with long-range forecasts predicting above-average temperatures through September.

Across Western states, hot weather is raising the risk fires may spark and spread across the parched landscape, quickly growing out of control. Red flag warnings cover Idaho, Wyoming, Utah, and Colorado through late Friday.Excessive heat warnings, which mean temperatures can soar well above 100, stretch from near Los Angeles to Nevada, and include parts of Oregon, Idaho, Utah, and Arizona.

Las Vegas, Nevada, may reach 116 on Saturday, within a degree of its all-time record, said Pagano. She said nearly 45 daily records may fall across a region home to 22 million people.

The most populous U.S. state is experiencing the highest combined extreme and exceptional drought coverage in the 21-year history of the U.S. Drought Monitor, with about 85% of its area under such conditions, according to the National Drought Mitigation Center.