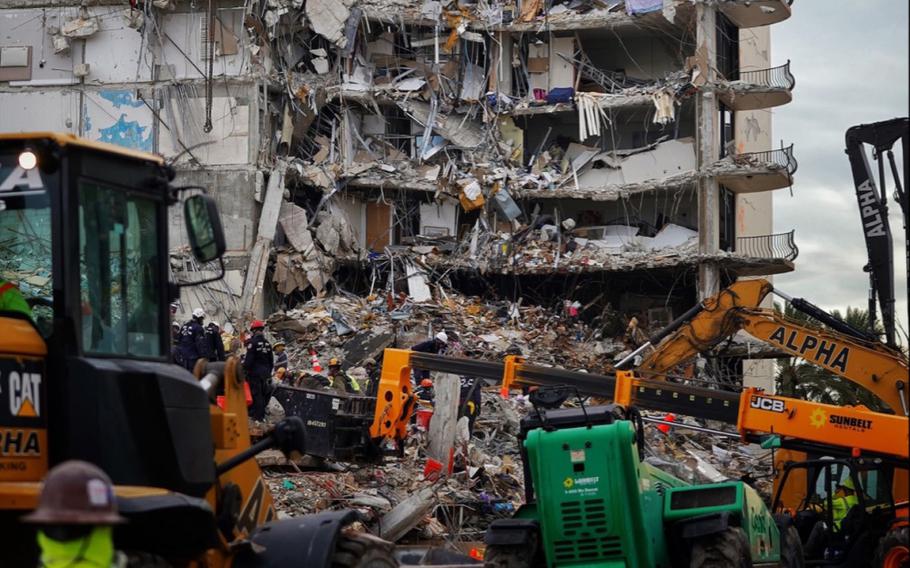 FEMA Urban Search and Rescue workers joined first responders in the aftermath of a building collapse in the Surfside community of Miami-Dade County, Florida. (Lameen Witter/FEMA)

(Tribune News Service) — To his parents, Juan Mora Jr. was their Milagro de Dios, or miracle of God. To his friends, he was a dedicated man and loyal companion who felt more like a brother than anything else.

Juan Mora Sr., a radio operator in Bay of Pigs Brigade 2506, was described fondly by his son’s friends as “a typical Cuban ... headstrong.”

Mora, a 2011 graduate of Loyola University, had been working for Morton Salt in Chicago for the last five years. He came to Miami recently to visit his parents, Juan and Ana Mora, and work remotely in Champlain Tower South ‘s apartment 1011, which faced the ocean.

Miami-Dade police on Wednesday and Friday confirmed that Mora Jr., 32, and Mora Sr., 80, were among the 78 found dead in the rubble of the Champlain Towers South building collapse in Surfside. Ana Mora, wife to Juan Sr. and loving mother to Juan Jr., is still missing.

“Juan’s memory, smile, and energy will continue with all who knew him as golden as his loyalty and friendship,” childhood friend Daniel Ugarte, 32, wrote in a text.

Fernando Marquet, who served in Brigade 2506 alongside Mora Sr., wrote in Spanish on Facebook: “No word from them, phone calls unanswered ... a sad day for the family, as for others who have been affected by this tragic accident.”

Mora’s and Ugarte’s other childhood friend, Oscar Cepero, 31, was fishing with Mora the Saturday before the collapse, just blocks from the condominium.

Last week he told the Miami Herald that the news felt “surreal.” When he heard about the catastrophic incident, he jumped in his car and headed to the scene.

“I was like, this looks like his parents’ place,” Cepero said at the time. “I went to the reunification place and was looking around for them, but nobody was providing information.”

The young Mora was adventurous, leaving Chicago after his college graduation to pursue an MBA in international business at a school in China from 2012 to 2014, a program Cepero also completed. Mora eventually moved back to Miami. He spoke five languages and lived in four cities. In 2016, he relocated to the place he last called home, Chicago, to work for Morton Salt.

He became a Cubs fan and even had a deep-dish pizza preference for Lou Malnati’s, Cepero told the Chicago Sun-Times.

Mora’s parents were both Cuban immigrants who built a life for their small family near Coral Gables. Ana Mora was a 30-year Delta employee who loved to travel with her family and cook meals for her son and his friends. She more recently served as an assistant to the principal at Belen Jesuit Preparatory School, the school where her son graduated in 2007.

In 2017, she was honored in a video to commemorate her 10 years of service to the school.

Belen Jesuit posted on Facebook Wednesday to announce the young alumni’s death “with a heavy heart” Days earlier, the school held a rosary service to pray for those affected by the collapse.

According to his LinkedIn, Mora participated in Belen’s youth mission for six years, working in impoverished areas of the Dominican Republic to build small schools, chapels and bridges in rural communities.

One teacher, Mercy Ballina-Sori, commented on the school’s Facebook post she “always enjoyed hearing from him” even after he graduated.

“My prayers go out to his extended family and friends,” she wrote. “This is heartbreaking.”