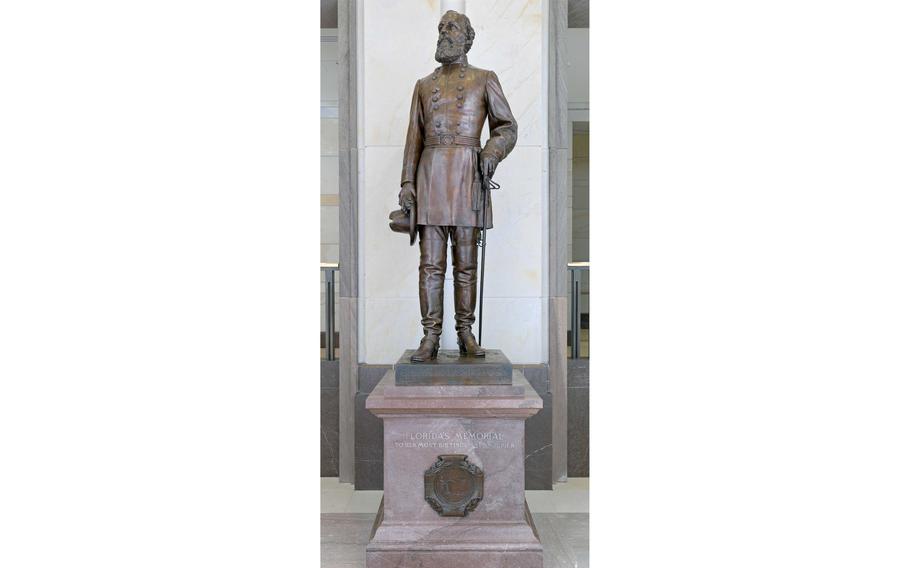 The statue of Confederate Gen. Edmund Kirby Smith is shown in the U.S. Capitol (Architect of the Capitol)

(Tribune News Service) — When the Civil War ended, Confederate Gen. Edmund Kirby Smith, the first native Floridian appointed to the U.S. Military Academy at West Point and the last Southern general to give up the fight, fled his fractured homeland for Mexico, fearing he was marked as a man wanted for treason.

Who wants him now?

After Lake County commissioners voted, 4-1, a year ago against bringing the general’s 2,762-pound bronze statue to their historical museum once it’s evicted from the U.S. Capitol, no other county asked permission to take in Smith’s uniformed military figure, said Mark Ard, Florida Department of State spokesman.

In an email to the Orlando Sentinel this week, Ard said the 98-year-old figure will be relocated and transported to the Museum of Florida History in Tallahassee “and we anticipate loaning the statue to another museum in the future to be made available for public display in Florida.”

The general, born in St. Augustine to a slave-owning family, will soon be replaced by a sculpted figure of Black educator, stateswoman and civil rights activist Mary McLeod Bethune in the Capitol’s National Statuary Hall, where each state is represented by statues of two prominent citizens.

Florida’s other figure is Dr. John Gorrie, dubbed the father of air conditioning, though his room-cooling idea never got hot in his lifetime.

“I think this is all part of the cancel-culture movement,” he said in a phone interview about booting the general out for Bethune.

“There is no compromising,” McCallister said when asked if there would be a suitable new home for Smith’s statue. “This man was a U.S. veteran, a nationally prominent hero, the most highly ranked military Floridian ever and he needs to be in Washington, D.C., where he’s been. End of story.”

Bob Grenier, former curator of the Lake County Historical Museum, likened the general’s statue to “King Tut” when state authorities chose Lake’s proposal in 2018 to display the Jim Crow-era relic in a military wing of the small museum on the ground floor of its historic courthouse in Tavares.

Grenier said then he didn’t see any issue with bringing the statue to the county where notoriously racist Sheriff Willis McCall loomed large from 1945 to 1972 and emerged as a central villainous figure in the racially unjust Groveland Four case. The U.S. Supreme Court overturned convictions in the trial of the young Black men accused of kidnapping a 17-year-old white housewife from a rural roadside in 1949 and raping her.

In 2019, Florida Gov. Ron DeSantis and his cabinet pardoned the four — all now dead — but their descendants want them to be exonerated.

Lake commissioners informed state authorities last July the courthouse “was not an appropriate location for this particular artifact.” In a letter to the governor, the board also noted “the division and strife created in our community over the decision to place the Smith statue in this particular location.”

The committee authorized to pick the statue’s future home wanted the new host to have a publicly accessible site and to be financially capable of paying to transport and install the figure. They promised to give preference “to proposals that convey the location’s historical significance to the subject matter, namely General Smith himself and the statue’s sculptor C. Adrian Pillars.”

Thomas Graham, professor emeritus of history at Flagler College, told the selection committee in 2018 that St. Augustine had the best connections: both the general and Pillars had at one time lived in the historic coastal city while neither Smith nor Pillars had any obvious link to Lake.

But St. Augustine is an unlikely landing spot, Graham said this week.

Last September, after debate and protest, the city removed its 150-year-old Confederate Memorial Obelisk from Plaza de la Constitución in the center of town and relocated the 100,000-pound reverential monument listing names of local men who served the Southern cause to Trout Creek Fish Camp.

Calls to move the monument followed local and national protests over the May 25, 2020, death of George Floyd, a Black man killed by a white Minneapolis police officer who kneeled on Floyd’s neck and back for 9 minutes and 29 seconds. Floyd’s death also fueled protests in Lake over Smith’s statue.

Though Smith’s boyhood home — the house in which he was born — is operated by the St. Augustine Historical Society, the property already has a statue of the military leader but he is depicted in a professorial robe, an homage to his later years as a mathematician at the University of the South.

Titled “Sons of St. Augustine,” the statue was sculpted by Maria Kirby Smith, the general’s great-granddaughter, and depicts an imagined meeting between Smith the professor and his former slave, Alexander Darnes, the first Black physician in Jacksonville and the second in the state.

“Putting another Kirby Smith statue in their courtyard might complicate things a little bit,” Graham said. “It would be simpler just to keep the statue they’ve already got there. He’s not in his Confederate uniform and is not in any way triumphal so that statue has never aroused any opposition whatsoever.”

Wherever it goes, the statue should be accompanied by an interpretive statement, which places the figure in historical context, Graham said.

“The state of Florida picked Kirby Smith as one of its representatives at the height of ‘Lost Cause’ triumphalism, the period from 1890 to 1920, when most of these statues around the South were erected, long after the Civil War,” he said. “It was a time when white supremacy and segregation and racism were in the ascendancy in the South and in fact in the whole country.”