Biden announces plan to evacuate thousands of Afghan translators ahead of Aug. 31 deadline to end US military mission in Afghanistan 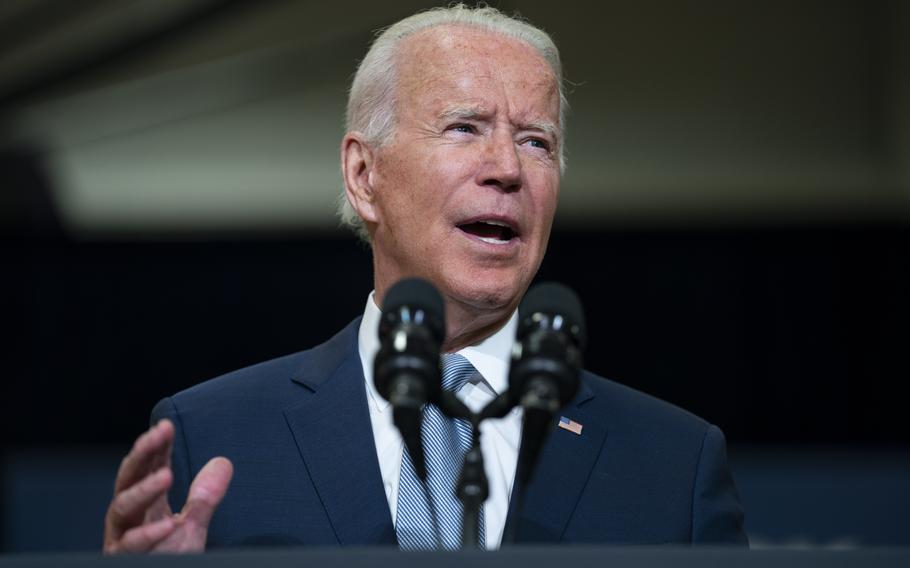 WASHINGTON — President Joe Biden on Thursday announced the U.S. military mission in Afghanistan will end by Aug. 31 and his administration will start to move thousands of Afghan translators to several other countries as they await visa approval to enter the United States.

“Our message to those women and men is clear. There is a home for you in the United States. … We will stand with you, just as you stood with us,” Biden said.

Biden made the announcements during a speech that largely offered a defense of his decision in April to withdraw all U.S. forces from Afghanistan and end America’s longest war. At that time, Biden set the withdrawal deadline for Sept. 11.

“As I said in April, the United States did what we went to do in Afghanistan: to get to terrorists who attacked us on 9/11 and deliver justice to Osama bin Laden. And to degrade the terrorist threat to keep Afghanistan from becoming a base from which attacks could be continued against the United States. We achieved those objectives. That’s why we went. We did not go to Afghanistan to nation-build,” Biden said.

As part of the drawdown, Biden in late June committed to evacuate many Afghans who assisted U.S personnel for nearly 20 years as interpreters, lawyers, teachers and other contract jobs. His decision came after weeks of mounting pressure from lawmakers and advocates to do so. At the time, he did not offer details on where they would be relocated and in what time frame.

Biden said Thursday that his administration has approved 2,500 Special Immigrant Visa applications this year that offer safe passage to the U.S. for these Afghan partners. A “point person” in the White House and a State Department-led task force are coordinating these efforts, he said.

He also said the administration has already “dramatically accelerated” the processing time for visa applicants to reach the U.S. safely. In concert with Congress, the Biden administration is also reviewing different ways to boost the number of slots available. This is typically done through the National Defense Authorization Act, which annually sets policy and funding for the Defense Department. But that could take until December to become law.

White House Press Secretary Jen Psaki told reporters earlier Thursday that for “security reasons,” the administration would not announce which countries and possible U.S. territories will temporarily host these U.S. allies as they await for their visa applications to be approved.

However, Psaki confirmed the U.S. will start to conduct flights this month for translators to these locations ahead of the full withdrawal of U.S. troops from Afghanistan.

Biden presented his defense of his decision for U.S. troops to leave Afghanistan as news outlets in recent weeks have reported the Taliban has taken control of a growing number of districts throughout the country. His remarks also follow the U.S. announcement last week that American forces have completely vacated Bagram Airfield, which was a focal point for military operations in the country for nearly two decades.

Biden said extending the Afghanistan mission, which began in 2001, beyond 2011 would not change the result, only potentially cost more U.S. casualties.

"How many thousands more Americans, daughters and sons are you willing to risk?... I will not send another generation of Americans to war in Afghanistan with no reasonable expectation of achieving a different outcome,” he said.

However, critics of the move have warned that Afghanistan again could become a safe haven for terrorists once U.S. forces leave, and the Taliban could eventually return to power in the country.

Gen. Scott Miller, the top U.S. commander in Afghanistan, recently said in an interview with ABC news that a civil war could erupt following the U.S. departure. He also voiced concern over reports of Taliban fighters taking over dozens of Afghan districts throughout the country.

But Biden on Thursday remained steadfast that Afghanistan will not collapse. Afghanistan's 300,000 trained troops have the capacity to prevent about 75,000 Taliban soldiers from overthrowing the government, he said.

Biden, who met two weeks ago with Afghan President Ashraf Ghani and High Council for National Reconciliation Chairman Abdullah Abdullah, said he stressed Afghan leaders must display unity to “drive toward a future that the Afghan people want and they deserve.”

He also said he told Ghani that the U.S. diplomatic presence in Afghanistan will endure and the U.S. will provide civilian and humanitarian assistance, including to protect the rights of women and girls.

When Biden announced the departure from Afghanistan in April, he said about 650 troops will remain to protect the U.S. Embassy in Kabul, while others might be deployed to protect the capital’s airport alongside Turkish troops.

The only way to achieve “peace and security” in Afghanistan is for the government to reach an agreement to co-exist peacefully with the Taliban, and “they make a judgment as to how they can make peace,” Biden said.

Though Biden said Thursday that he does not trust the Taliban, its leaders plan to present a written peace proposal to the Afghan government as soon as next month, Reuters reported this week.

Those negotiations also will not alter the Pentagon plan to support the Afghan military after U.S. troops leave the country from a distance by employing “over-the-horizon” capabilities. But it remains unclear what those capabilities are.

Chief Pentagon spokesman John Kirby told reporters Thursday that the Defense Department is working with the State Department on how to conduct counterterrorism efforts from elsewhere in the region without troops on the ground in Afghanistan.

Kirby said the U.S. will maintain an aircraft carrier strike group in the region, along with other military facilities located throughout the Middle East. Contractors are also still providing support to the Afghans and the Afghan air force, he said.

Kirby also confirmed Thursday that the Taliban has taken dozens of district centers in Afghanistan and they intend to target provincial centers.

Biden said the U.S. will continue to provide funding and equipment to Afghan National Defense and Security Forces and "ensure they have the capacity to maintain their air force."

He said the over-the-horizon counterterrorism capabilities will "allow us to keep our eyes firmly fixed on any direct threats to the United States in the region, and act quickly and decisively if needed."