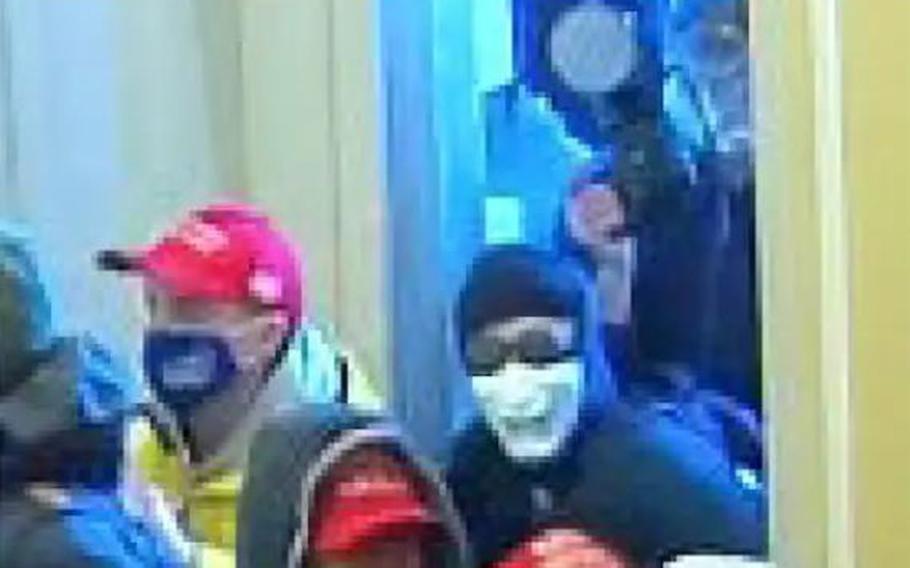 Fi Duong, who prosecutors say this shown in this still image from surveillance video in a white mask and dark shirt, is accused of storming the Capitol on Jan. 6. (U.S. Department of Justice)

After storming the Capitol on Jan. 6, a Northern Virginia man began forming his own militia-like group in the D.C. suburbs and building up a supply of explosives under the guise of a Bible study group, according to federal prosecutors.

Fi Duong, 27, appeared in court Friday and was released to home confinement pending trial, over the objections of prosecutors who sought stricter terms. According to the court record, at the time of his arrest he had several guns, including an AK-47, and the material to make 50 molotov cocktails. Details of the case were made public Tuesday.

Duong entered the Capitol on Jan. 6, according to prosecutors, telling an undercover federal agent that he climbed the building wall, delivered a letter to lawmakers and filmed others opening a door to the building with a crowbar.

An undercover officer with the D.C. police first encountered Duong at the Capitol on Jan. 6, according to the government. Duong described himself as an “operator” and later explained that he wore all black to look like an anti-fascist activist, the government alleged in court documents.

In video later seen by investigators, Duong is identified in court documents as shouting “We’re coming for you Nancy” and pushing a fellow protester toward the doors on the Senate side of the building.

They stayed in touch, and a week later Duong allegedly told the undercover officer he was part of a “cloak and dagger” group that will “build resistances . . . for what will inevitably come.” In March, he told associates, “Keep your guns and be ready to use them.”

He and others held “Bible study” where they discussed firearms and other training, according to court documents; Duong also brought someone he described as a “three percenter” to one meeting. The right-wing Three Percenters movement, formed in 2008, is named after the false claim that only 3% of colonists fought in the American Revolution. Several adherents have been charged with conspiring to storm the Capitol. Duong said he had attended some rallies with the group but preferred to stay independent.

Explaining that two generations of his family had fled communist regimes in China and Vietnam before immigrating to the United States, according to court documents, Duong is quoted saying, “Now we’re here. And at a certain point, you just gotta make a stand.”

He talked about surveilling the Capitol building, and in February an associate took some footage of it, according to prosecutors. He also talked about freeing alleged rioters who were behind bars, saying, according to the government, “I see that as an opportunity. With every great revolution, you go to the prisons and you break them out.”

According to the court documents, he and the undercover agent toured the jail in Lorton, Va., where he talked about testing out explosives.

He told the agent, the government alleged, that he was working on a “manifesto,” saying, “If I get into a gun fight with the feds and I don’t make it, I want to be able to transfer as much wisdom to my son as possible.” Prosecutors say he also discussed how far he could shoot on his family’s property in the event of a raid and said it could be the site of a second Waco - a reference to the deadly 1993 confrontation with federal agents in Texas.

He said at a meeting in June that he had collected Styrofoam and more than 50 wine bottles to make molotov cocktails but had held off on buying fuel “to avoid . . . being hit with a conspiracy charge,” according to the complaint filed against him. He told the undercover agent he had been saving motor oil from his car for that purpose.

But he also said he would prefer a peaceful secession of Appalachia to a violent conflict, according to the record, and that all his preparations were for “defense.” The molotov cocktails, he told the agent, were for disabling armored vehicles. He repeatedly put off plans to actually test the explosives.

U.S. Magistrate Judge G. Michael Harvey declined to impose tougher restrictions on Duong’s release, noting that the government did not seek to jail Duong as a flight risk or threat to the community. He is charged with illegally entering the Capitol, obstructing the vote count and disorderly conduct — but not with planning or committing violence.

Harvey said Duong had no criminal record and had demonstrated ties to the community; he is employed and lives with his parents and child in Alexandria.

The undercover agent “gave him every opportunity to step over the line, and at every point he chose not to,” Harvey said. “Someone who showed so much concern for what the legal lines are should be given the opportunity — to show he can continue to stay within the lines.”