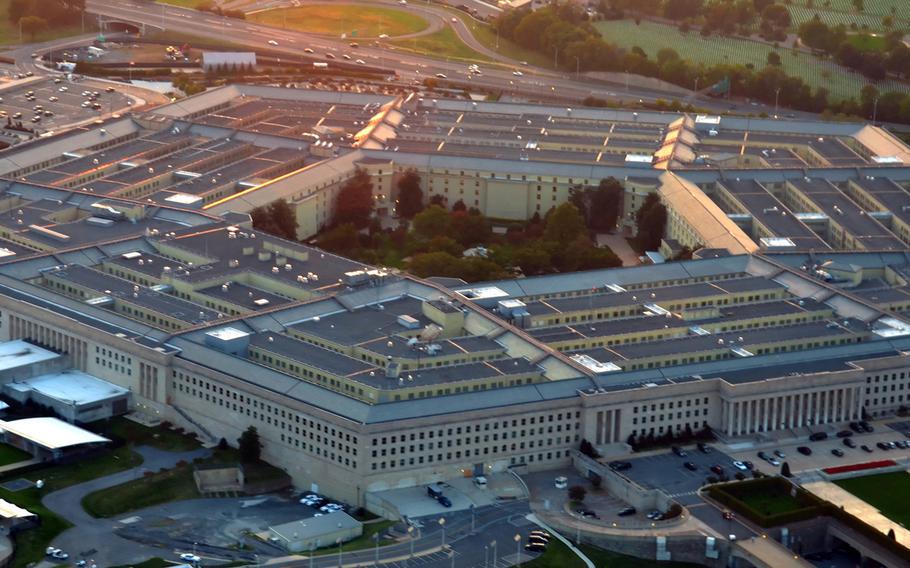 The Pentagon announced on Tuesday plans for a “multi-vendor” cloud-computing project and said it “intends to seek proposals from a limited number of sources, namely Microsoft and Amazon Web Services.” (Dreamstime/TNS)

WASHINGTON (Tribune News Service) — The Pentagon scrapped a $10 billion cloud-computing contract awarded in 2019 to Microsoft Corp. after several years of wrangling between the government and some of the biggest U.S. tech companies over the deal, indicating it plans to divide the work between Microsoft and rival Amazon.com Inc. instead.

“With the shifting technology environment, it has become clear that the JEDI Cloud contract, which has long been delayed, no longer meets the requirements to fill the DoD’s capability gaps,” the Defense Department said in a statement Tuesday. The project, known as the Joint Enterprise Defense Infrastructure and intended as a sole-source contract, had been fiercely disputed from the start.

Instead, the Pentagon announced plans for a “multi-vendor” project and said it “intends to seek proposals from a limited number of sources, namely Microsoft and Amazon Web Services,” the only two companies it deems capable of meeting its requirements. It said other vendors will be considered if they can show they meet the contract terms.

Microsoft extended an earlier decline, dropping as much as 1.2% to a session low after the news. Amazon held onto its gains, and was up 3.3% at 12:32 p.m. in New York.

The future of the JEDI cloud program was thrown into doubt earlier this year when Pentagon officials said they may scrap the contract if the U.S. Court of Federal Claims declined to dismiss Amazon’s claims that political interference from former President Donald Trump cost the company the lucrative cloud deal. In April, Judge Patricia Campbell-Smith rejected requests by the government and Microsoft to dismiss part of Amazon’s lawsuit, allowing the litigation to continue.

The new cloud contract, dubbed the Joint Warfighter Cloud Capability, will be awarded to multiple vendors for a period of five years. The Defense Department said it hasn’t yet determined a maximum award amount for the replacement cloud project, but expects it to be in the billions of dollars.

Microsoft and Amazon won’t be awarded the deal automatically and will have to submit proposals on how they will satisfy the government’s requirements, according to the Pentagon. Among the requirements the Defense Department is planning to impose are the ability to handle sensitive data at multiple classification levels, global availability of cloud services in tactical environments and enhanced cyber security controls, according to a Pentagon fact sheet.

The prospect of endless litigation wasn’t the driving force behind the Pentagon’s change, said Acting Chief Information Officer John Sherman in a telephone interview. “This is really about mission need,” he said. “Because JEDI was conceived over three and a half years ago, we have moved to a different place” in terms of cloud advances.

Amazon and Microsoft were notified Tuesday of the new strategy through the Justice Department, which has been defending the Defense Department’s position. “We don’t have agreement yet” with them, although the initial feedback indicated “nothing negative,” Sherman said.

Sherman said that he will be reaching out to Oracle Corp., International Business Machines Corp. and Alphabet Inc.’s Google to outline the new plan. “The door remains wide open for the next three and a half months as we conduct market research” on additional competitors and whether they can meet the requirements.

The original contract, with its JEDI acronym, was intended to evoke “Star Wars” imagery. That project, valued at as much as $10 billion over a decade, was intended to serve as the primary data repository for military services worldwide. The Defense Department has said it’s adopting commercial cloud services, in which computing power and storage are hosted in remote data centers run by outside companies, to give it a tactical edge in the battlefield and strengthen its use of emerging technologies.

The Pentagon’s dissolution of the JEDI contract and implementation of a new cloud project offers one of the clearest public validations that Microsoft and Amazon remain the leaders in the cloud services market for the federal government. When Microsoft won the JEDI contract, it was seen as sign the company was catching up to Amazon, with some analysts touting it as possibly “the largest cloud contract award in history.”

Over the years, the contract had invited scrutiny from major tech companies, lawmakers and the White House. The Pentagon’s decision to award the deal to a sole provider, rather than breaking it up into several subcontracts, prompted vigorous behind-the-scenes lobbying and a public relations campaign by rivals to unseat Amazon, which was seen as the original front-runner when the cloud contract competition was unveiled in 2018.

In September 2020, Oracle Corp. lost an appeal of a lawsuit challenging its exclusion from the procurement. The software maker alleged the Pentagon’s contract requirements were overly narrow and that the competition was fatally tainted by conflicts of interest involving Amazon. Oracle’s lawsuit claims that Amazon offered two former Pentagon employees jobs at the company while they were working on the contract.

The U.S. Court of Appeals for the Federal Circuit affirmed a lower court ruling that Oracle wasn’t harmed by any errors the Pentagon made in developing the contract proposal because it wouldn’t have qualified for the contract anyway. Oracle has appealed that ruling to the Supreme Court, which hasn’t decided whether to review the case.

After Microsoft’s upset victory in October 2019, Amazon Web Services filed a lawsuit asserting that the Defense Department ignored Amazon’s superior technology and awarded the contract to Microsoft despite its “key failures” to comply with requirements. The Pentagon made those errors because of improper interference by Trump, who considered Amazon co-founder Jeff Bezos — who also owns the Washington Post — his “political enemy,” according to Amazon’s lawsuit. The Defense Department denied that politics influenced its decision to award Microsoft the deal.

Amazon’s lawsuit relied on a laundry list of comments and actions by Trump and the Defense Department that the e-commerce giant claims shows the Pentagon bowed to political pressure when it awarded the deal to Microsoft. In one case, Amazon cites claims in a book by ex-Defense Secretary Jim Mattis’s former speechwriter, Guy Snodgrass. He said Trump told Mattis in the summer of 2018 to “screw Amazon” by locking it out of the bid. Mattis didn’t do what Trump asked, Snodgrass wrote.

The company also pointed to Trump’s comments during a news conference in July 2019, when he openly questioned whether the JEDI contract was being competitively bid, citing complaints from Microsoft, Oracle and International Business Machines Corp.

To bolster its case, Amazon asked the court to let it question Trump, former Defense Secretaries Mattis and Mark Esper and Dana Deasy, who was the Pentagon’s chief information officer. Judge Campbell-Smith has yet to issue a ruling on that motion.

In April 2020, the Defense Department’s inspector general said there was no evidence that the Pentagon’s decision to award the deal to Microsoft was the result of interference from Trump, though it said its probe was curtailed by White House officials. The watchdog also cleared the project of conflict of interest allegations involving Amazon.

As the legal and regulatory battles over JEDI dragged on, the Defense Department stressed that it has more than a dozen other cloud projects, including partnerships with Oracle, Amazon, General Dynamics Information Technology and Microsoft.