Survivors of the Surfside building collapse worry: What’s next?

by
Lori Rozsa and Meryl Kornfield
• The Washington Post • July 6, 2021 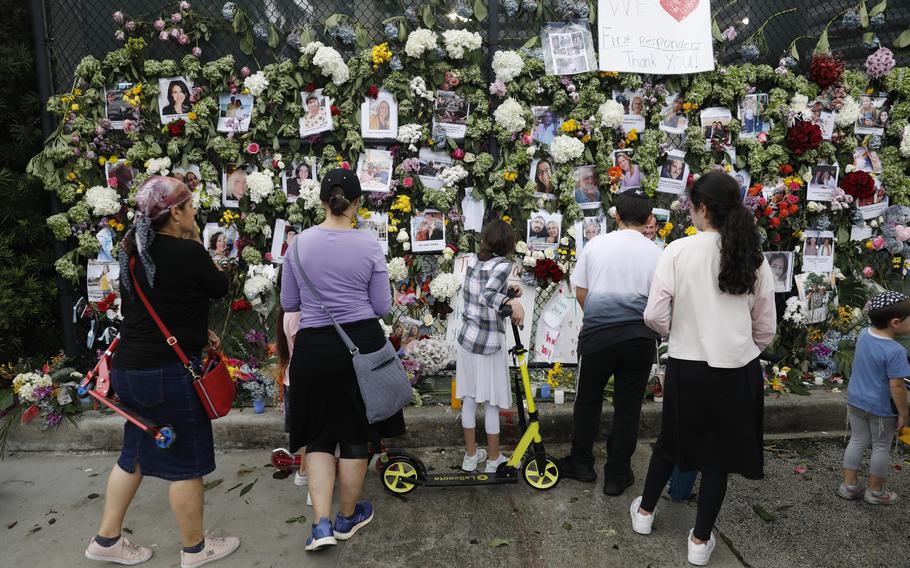 People pay their respects at the memorial wall dedicated to those missing from the Champlain Towers South collapse. (Octavio Jones/for The Washington Post)

SURFSIDE, Fla. — In the hours after the collapse of Champlain Towers South, many residents who had survived gathered at the Surfside Community Center, looking for information and help. They mingled on the sidewalk with tourists who had been evacuated from the Blue Green Solara hotel nearby.

News was hard to come by that chaotic first morning, but help showed up fast. Neighbors brought blankets and robes. A case of water appeared; over the course of the day, dozens more were dropped off. Workers from a local bakery walked around with boxes of Kosher croissants, offering them to the worried and exhausted people sitting on benches and curbs. A woman with a basket of fruit handed out bananas and apples to anybody who wanted one. Later in the day, local pizzerias delivered dozens of pies. Staff from nearby restaurants passed around sacks full of arepas and croquetas.

Neighbors loaded up strollers with toys and coloring books from their homes and walked them over to keep the few children there occupied. Therapy dogs came by — Jeepers the Dachshund, Cash the Golden Retriever, Brownie the Chihuahua and others.

As the day wore on, and the only news was grim — first an estimate of 57 residents from Champlain South unaccounted for, then 99, a number that is now 117, with 28 dead — the atmosphere of worried anticipation changed to despair. Paramedics arrived with a stretcher and carried out an elderly survivor who was overcome with exhaustion and needed to be hospitalized.

Other survivors were escorted to the Residences at Marriott hotel a block away. They’re the people who fled with little or nothing, besides their lives.

Some were able to grab wallets and handbags and phones. Some of them barely made it out, clad in only their pajamas, many of them having been awakened by the loud cracking sounds coming from their walls as the structure failed and crashed around them.

The race for life — many tripping down darkened stairwells, scaling walls, wading through ankle-deep pools of water swimming with electrical cables — saved 126 people from the catastrophe.

But after the first few hours of being fed, clothed and comforted at the community center, they now they face the daunting task of getting their lives on track after surviving what may be the worst building failure in U.S. history.

“What do I do? Where do I go? How can I start over?” asked Maria Iliana Monteagudo, 64, who had lived in her condominium on the sixth floor of Champlain South for only seven months. “My life, all my savings, are gone with that building. Gone, desaparecida.”

Like many other survivors, Monteagudo is grateful that she survived. But she and others worry about what’s next.

Will they have to continue paying off a home that’s been demolished, or a car that was crushed? How can they get the power company and the cable company to stop charging for services they can no longer use? It’s possible that insurance money or lawsuits will cover some losses, but those are long processes with uncertain outcomes. 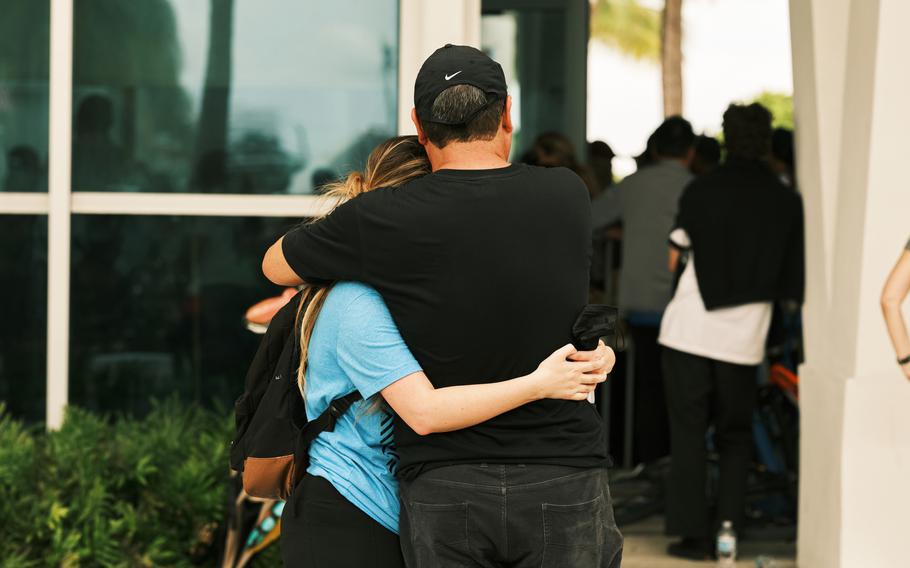 Friends and family wait for news about missing loved ones at the Surfside Community Center. (Zack Wittman/for The Washington Post)

Support Surfside, an entity set up by a coalition of nonprofits to collect and disburse monetary donations, said “clear, transparent guidelines that will guide how we administer these funds for the direct benefit of the victims” will be released this week.

“So far, they’ve given out some emergency monies, which they were eligible for, just to be able to purchase basic needs, but for the larger amount, they need to come up with a plan,” Levine Cava told The Post.

For now, many former residents have busied themselves trying to acquire their more immediate needs. They’re living in a mix of hotels, vacation rentals and with friends or family. They’re getting gift cards and free Uber rides to shop for themselves.

In the first week, $72,000 worth of gift cards were given to 130 “individuals who have been directly impacted by this tragedy,” Support Surfside reported last Friday. The organization also reported that the Red Cross said housing “is available and has been secured for all families who will be needing this assistance, in both the short and long term.”

Also, “survivors were receiving $2,500 prepaid cards plus a supplement of $1,000 more for each additional family member above the first two family members.”

Steve Rosenthal is one of the survivors waiting to find out how he will recover financially, even while millions of dollars have flowed to fundraisers established for survivors of the collapse.

Evaluating the contents of his hotel closet, Rosenthal notes his entire wardrobe: a T-shirt, shorts, two pairs of jeans, sandals, two pairs of sneakers and a couple of Haines underwear.

The 72-year-old said he used to “dress to the nines.” But now, the former resident of Champlain Tower South has only what friends have given him and all he could grab before firefighters plucked him from his balcony in the middle of the night.

Rosenthal lived in Unit 705 — a two-bedroom, two-bathroom apartment that had a sunset view of Collins Avenue and Biscayne Bay — for 20 years, and he’s still paying off his mortgage.

Some displaced families have found new homes — for now at least. Michael Capponi, the founder of Global Empowerment Mission, a nonprofit helping survivors, said he’s placed 15 families in rent-free, furnished apartment units. Capponi said the families can stay at least through the end of July.

However, the housing is only the first part of it, he said.

“What ends up happening is that it becomes adopt-a-family,” Capponi said. “The next three to six months we have to make sure they have everything they need, apartments, groceries, contact lenses, cars, diabetic medicine, you name it.”

While many of the residents are retirees, others who still work have told Capponi they need supplies to keep working.

“We were just talking to someone who is a contractor and his tools are gone, or someone’s a computer programmer and he lost his computer, so you’re going to have to find in each case what each person needs to get back on their feet,” Capponi said.

The Surfside Community Center has been turned into what one FEMA official called “a one-stop shop” for victims who need help with the basics — such as getting a duplicate driver’s license or notifying the utility services that they no longer need electricity or cable. Every victim who visits the center is assigned a navigator who walks them around to the tables of 22 organizations that can help, including the Florida Office of Insurance Regulation. They also offer mental health counseling.

“They don’t have anything. They don’t have IDs, bank cards, nothing,” said Sonia Diaz, a spokesperson for Support Surfside. “We’re giving them the bank cards so they buy their own things, like clothes or deodorant. Can you imagine being a woman and having to ask somebody for money so you can buy tampons? With the bank cards, they can have some agency.”

But the biggest and most expensive issue, Diaz said, is housing. Miami-Dade County has some of the highest rent-to-income ratios in the country — rent makes up more than half of monthly earnings, on average.

Figuring out how to help Surfside victims with “the longer-term big-ticket items,” Diaz said, will be addressed this week.

“After Tuesday, we’ll have more amplified answers for the long term,” she said.