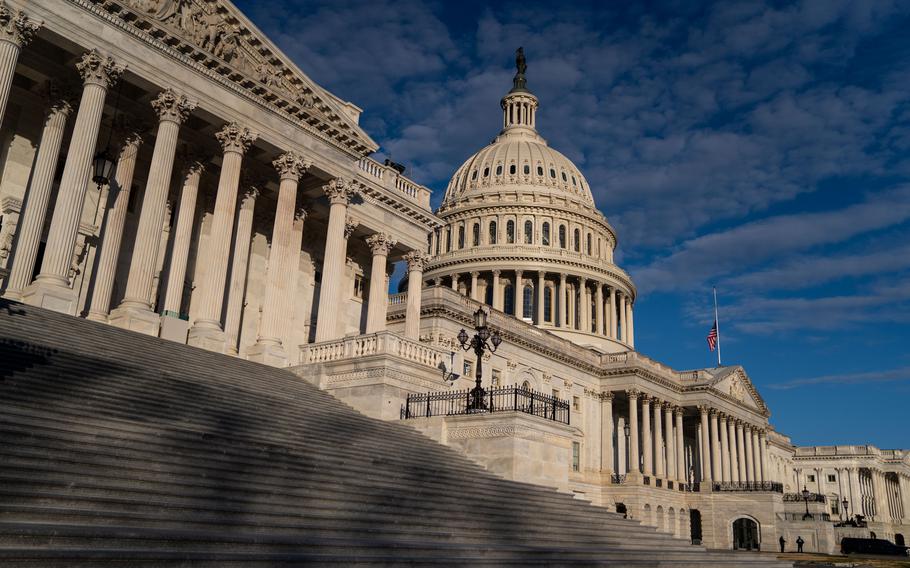 WASHINGTON (Tribune News Service) — House Republicans are staying unified thus far in opposition to Democrat-drafted spending bills, despite racking up hundreds of millions of dollars in home-district earmarks after a selection process many in the GOP acknowledge has been fair and transparent.

From the multiyear, $759 billion surface transportation bill to the initial batch of fiscal 2022 appropriations bills for agencies ranging from the Small Business Administration to the Interior Department, Republicans are staying on message: The bills spend too much and are too laden with policies they oppose.

“I think these bills are gonna face pretty uniform opposition across the board,” Oklahoma’s Tom Cole said of upcoming appropriations votes. Cole is the top Republican on Rules and the Labor-HHS-Education Appropriations Subcommittee, which funds the largest domestic spending bill.

That’s despite Republicans procuring 67 percent of their earmark requests in that package, for a total of $1.7 billion. By contrast, Democrats received 60 percent of their requests — though they submitted three times as many as Republicans — worth almost $4 billion, according to a Transportation and Infrastructure panel tally.

The House Appropriations Committee has approved half of its dozen spending bills, readying those for floor action after the July Fourth recess. Two more have gone through subcommittees.

None have received a single Republican vote thus far, including the politically sensitive Military Construction-VA measure, with funding for military family housing and child care, veterans hospitals and more.

Military construction earmarks were generally more popular with Republicans, who requested 13 out of a total 18 submitted; of the 11 projects Democrats ultimately included in the bill, totaling $199.2 million, nine went to Republicans.

The two largest Military Construction-VA earmarks were requested by GOP Conference Chairwoman Elise Stefanik of New York and her deputy, Mike Johnson of Louisiana: $27 million to help supply water to Fort Drum, an Army base near the Canadian border, and $36 million for a new entrance road and gate at Barksdale Air Force Base, respectively.

Appropriations ranking member Kay Granger, R-Texas, who hasn’t requested any earmarks, led her GOP colleagues in opposition to the bill. She cited omission of language forbidding closure of the Guantánamo Bay detention facility in Cuba, and inclusion of a provision that would allow the VA to provide fertility counseling and treatment to veterans and their spouses.

The Labor-HHS-Education bill won’t come up until after the Fourth of July recess. Democrats have allocated to that measure a $63 billion, or 36%, increase over the current fiscal year, and Republicans are already girding for a fight over the long-standing Hyde amendment, which bars federal funds for abortion services.

House Appropriations Chair Rosa DeLauro, D-Conn., with backing from President Joe Biden, has said she’ll remove Hyde from the Labor-HHS-Education measure. Earmarks in that bill haven’t yet been disclosed, but Cole has a hard time seeing any GOP support for the bill.

“They know at this stage, when you’re taking out Hyde and doing things like that, you’re not going to get any Republican votes,” Cole said.

Mike Simpson of Idaho is the top Republican on the Energy-Water Appropriations Subcommittee. In the bills that have been introduced so far, he’s received $17.7 million — already more than half of the $33.8 million Simpson asked for this fiscal year. His funded projects include $4.2 million for infrastructure improvements to the U.S. Sheep Experiment Station and $7 million for the Shoshone Bannock Tribal Fire Station.

Despite Democrats’ generosity, Simpson’s not a fan of the spending bills. He called the overall $1.506 trillion fiscal 2022 appropriations ceiling, a 10% boost over this year, “horrendous.”

He said he’s sticking to his position even if it makes Democrats reconsider including his requests in the final spending bills.

“I’m willing to risk that,” he said. “You’ve got to be happy with the bill overall to start with.”

When it comes to surface transportation earmarks, House Transportation and Infrastructure Chair Peter A. DeFazio says he’s going to honor GOP requests despite their “no” votes.

“I’m not pulling that kind of retribution,” the Oregon Democrat, who faces a potentially tough reelection fight next year, told reporters last week. “I mean, these are meritorious projects.”

“That’s a vote they’ll have to account for,” said Kaptur, D-Ohio. “Maybe some of them will come to their senses.”

Even if they end up keeping GOP earmarks in the spending bills, Democrats are hinting there’s a potential political price to be paid for voting against them.

In a statement, House Majority Leader Steny H. Hoyer made clear his frustration with Republican votes he said were “feckless and contrary to the needs of their districts.”

“I am deeply disappointed, but not surprised, that Republicans on the Appropriations Committee would vote against the interests and priorities of leaders in their own communities,” said Hoyer, D-Md.

House GOP appropriators have secured $143.2 million in earmarks throughout the six bills the committee has released data for. But they argue their votes against the spending bills aren’t about projects back in their districts, but broader disagreements they can’t ignore.

In addition to concern about overall spending levels, there’s a partisan split over the allocation of funds to defense vs. domestic and foreign aid accounts.

“At this point, until we have a higher number on defense, I don’t think we’re voting for any of these bills,” he said.

Calvert requested $22 million in “community project funding” in four bills for Southern California’s 42nd District. Much of that spending would be in bills that haven’t been released, but he did get the full $3.28 million for two projects he requested in the Interior-Environment bill.

Ohio Republican David Joyce, ranking member on the Interior-Environment panel, requested $20.8 million for his district and so far has secured $10.4 million. But he thinks the bill overall is too big to win his support. Joyce spokeswoman Katherine Sears said his requests totaling 0.02 percent of the Interior-Environment bill “do not translate to support for $43.4 billion in new federal spending.”

The Appropriations Committee’s first votes on fiscal 2022 spending bills came Tuesday, but the Legislative Branch bill wasn’t eligible for earmarks and GOP appropriators didn’t have any earmarks in the Financial Services measures.

The $29.1 billion Financial Services bill is light on House GOP earmarks overall. But Republicans secured all eight projects they requested, worth $5.8 million, out of 55 Small Business Administration earmarks totaling $32.4 million.

Republicans cast their first votes against spending bills that included earmarks for their districts Wednesday, when they voted against the $26.6 billion Agriculture and $124.5 billion Military Construction-VA spending bills. Republican appropriators’ earmarks totaled $35.4 million in the Agriculture bill and $61 million in the Military Construction-VA measure.

Democrats’ Agriculture measure was fairly kind to Republican earmarks, with GOP projects accounting for nearly half of the $202.3 million total.

The Homeland Security measure, which hasn’t come up for a full committee vote yet, has 74 earmarks, all within Federal Emergency Management Agency accounts, totaling about $97.2 million. Republicans account for 23 of those, funded at $24.1 million.

Transportation-HUD ranking member Mario Diaz-Balart, whose panel has received more than 1,100 requests totaling $2.7 billion, said Chairman David E. Price, D-N.C., has been transparent, thoughtful and fair throughout the process. That bill hasn’t been released yet, but so far Diaz-Balart has “no complaints on [Price’s] approach or how he’s dealing with it.”

But that won’t convince him to vote for that spending bill, or any other. “Earmarks are one small part of a much larger bill,” said Diaz-Balart, R-Fla.

Diaz-Balart requested $12 million in earmarks and so far gotten two — $1 million for a drinking water project in Miami-Dade County and $750,000 for a sewer project in the same area.

Cole, who requested $38.1 million from three bills the committee has yet to release, said Republicans ultimately have some leverage in the battle, given the need to get 60 Senate votes for appropriations.

The alternative to a negotiated compromise on spending levels and policy riders, Cole said, is a continuing resolution with no funding increases — and no earmarks.

“There are two choices — you can either increase the defense number, decrease the domestic number and put Hyde back in the bill. Or you can live with a CR, and a CR is Donald Trump’s last negotiated budget,” he said. “If we don’t get a deal, nobody is going to get any earmarks.”