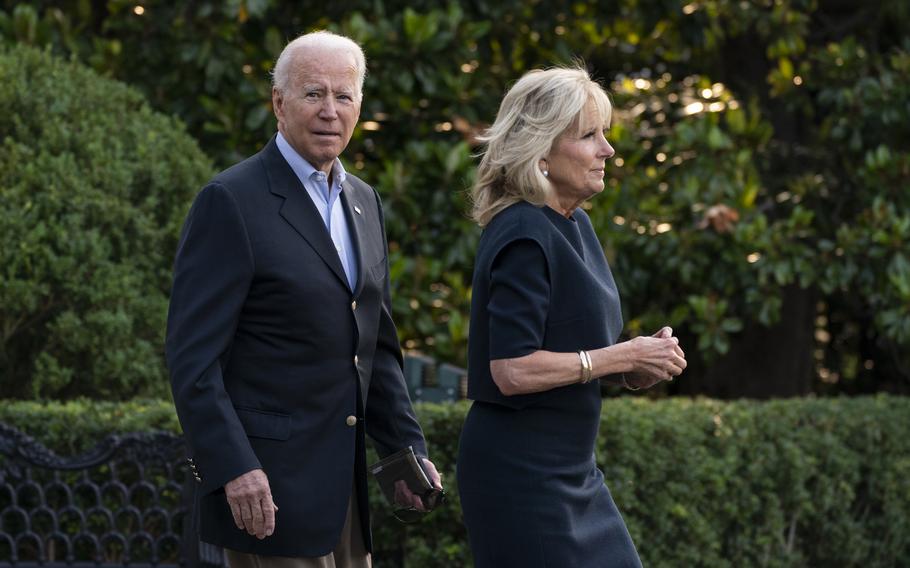 President Joe Biden and first lady Jill Biden walk on the South Lawn at the White House in Washington, Thursday, July 1, 2021, to board Marine One. (Manuel Balce Ceneta/AP)

WASHINGTON — President Joe Biden has earned high marks for his handling of the coronavirus pandemic, but the government’s effort to vaccinate as many Americans as possible continues to face hurdles, including resistance among people who identify as Republicans, according to a Washington Post-ABC News poll.

Biden made addressing the pandemic his first priority as president. He and his team pushed to accelerate the distribution of vaccine doses, developed during the Trump administration, and pressed Congress to enact a $1.9 trillion stimulus package to help the economy rebound from covid-related shocks and disruptions.

Today, more than 6 in 10 Americans say they approve of the job the president has done in dealing with the pandemic, almost identical to findings in April as he neared the end of his first 100 days in office. His overall approval stands at 50% positive and 42% negative, figures that are also virtually the same as in April.

In both cases, there are huge differences in ratings offered by Republicans and Democrats, a fresh signal of the nation’s defining partisan breach. On his overall job rating, 94% of Democrats approve compared with 8% of Republicans. On the pandemic, Democrats are at 95% approving, Republicans at 33%.

One low mark for the president comes on the issue of immigration at the U.S.-Mexico border, where 33% of Americans say they approve of how he is handling the issue, amid a surge of migrants attempting to cross into the country. A slight majority (51%) say they disapprove, including 90% of Republicans. Sixteen percent overall say they have no opinion.

Among fellow Democrats, a tepid 63% majority approve of Biden’s handling of immigration at the southern border, while 15% disapprove and the rest offer no opinion.

Two months ago, Biden set a goal of having 70% of adults receive at least one shot by July 4, but the administration has missed that target, despite multiple strategies to encourage people to get vaccinated and targeted efforts to reach younger Americans and people of color who have been hardest hit by covid-19.

Calculations compiled by The Post show that about 67% of adults had received at least one shot as of late last week, on a path to hit Biden’s 70% target by late July. Daily vaccinations have dropped dramatically since their peak of more than 3 million per day earlier this spring, now averaging about 1 million per day.

The poll shows that while there is room for growth in vaccinations, going well beyond the 70% target could prove difficult. Nine percent of those surveyed say they either definitely or probably will get vaccinated at some point in the future. But nearly 3 in 10 (29%) say they are not likely to get vaccinated, including 20% saying they will definitely not do so. The 29% who say they are not likely to take a vaccine compares with 24% who said that in April.

But while 6% of Democrats say they aren’t likely to get vaccinated, 47% of Republicans fall into that camp, with 38% of Republicans overall saying they will definitely not get shots against the virus.

Most independents (54%) say they have received at least one shot and another 11% say they are likely to do so. Among independents, 22% say they will definitely not get vaccinated.

Regionally, there are significant variations in the rate of vaccinations, with lower rates in states dominated by Republicans. Seventy-five percent of adults in the mostly Democratic Northeast say they have received at least one shot. That compares with 62% in the West, 56% in the South and 53% in the Midwest. The Midwest shows the highest level of regional resistance to vaccination, with 27% saying they will definitely not get a vaccine.

More than 600,000 people have died in the United States from covid-19, with nearly 34 million cases reported. In the Post-ABC poll, 3 in 4 Americans say they have not contracted covid-19. Another 11% report that they have tested positive, while 12% say they think they had covid-19 but never tested positive.

A majority of Americans (69%) say they are at either low or no risk of contracting the disease, while 29% consider themselves at either moderate or high level of risk. Notably, unvaccinated people are less likely to say they are at risk of getting sick from the coronavirus than those who have received a vaccine, 22% vs. 32%.

Those perceptions of risk come at a time when the Delta variant, a new strain that is considered highly transmissible, has been spreading in this country and at an even faster pace in other countries. U.S. officials have warned about the dangers of the Delta strain, which has raised questions in some parts of the country about whether even vaccinated people should wear masks indoors.

The federal government’s initial handling of the pandemic drew widespread criticism, much of it leveled at President Donald Trump, who often disagreed with the health and science experts in his administration and sought to play down the severity of the crisis. Trump’s approval rating on the pandemic, after being initially positive, remained strongly negative throughout the remainder of his presidency.

Today, a majority of Americans (56%) say they are either very or somewhat confident that the nation has learned lessons from this pandemic that will make the response to another pandemic in the future more effective. Democrats are significantly more positive in their assessment than are Republicans or independents.

The Post-ABC poll was conducted June 27-30 among a random national sample of 907 adults, with a margin of sampling error for overall results of plus or minus 3.5 percentage points. Error margins are larger among subgroups.

The Washington Post’s Scott Clement contributed to this report.