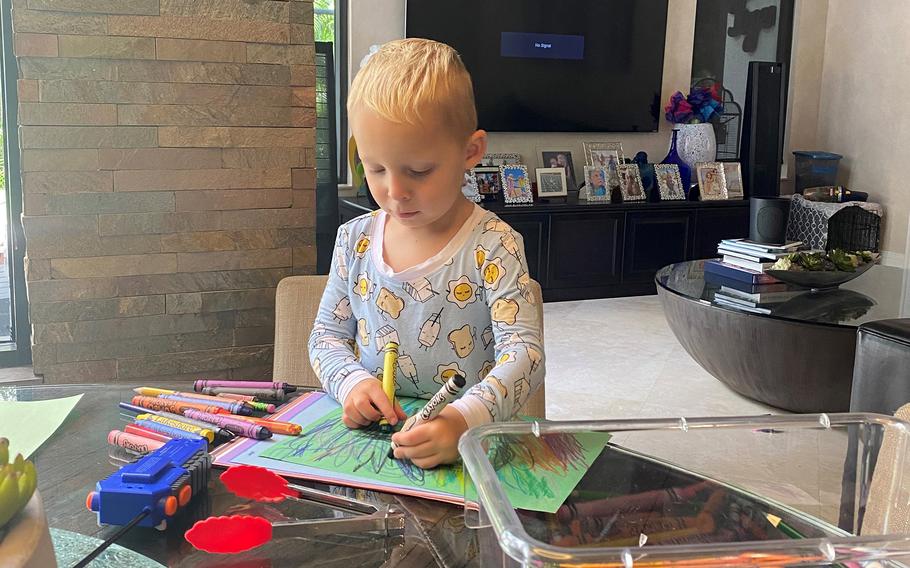 Hudson Byrnes, 4, crafting cards for rescue workers at his home in Plantation, Fla., about 20 miles from Champlain Towers South. (Courtesy of Lauren Book)

Omar Blanco was sifting through the vast mountain of rubble at the site of the collapsed condominium in Surfside, Fla., when he was approached by a stranger and offered something unexpected: a handwritten card on colorful construction paper.

“It stopped me in my tracks,” recalled Blanco, 49, a Miami-Dade Fire Rescue captain.

He paused and looked down at the note, written by a small child he had never met before. It simply said: “Thank you for what you’re doing.”

After a grueling week of physical, mental and emotional strain, Blanco said, the modest message moved him deeply.

“The innocence of children reminds us that the world is a beautiful place, no matter what tragedy we might be dealing with,” Blanco said. “Nothing is more comforting than a note from a child just to say thank you.”

The horrific collapse struck suddenly in the early hours of June 24, and 124 people are still missing and at least 24 are dead. Blanco has been working tirelessly alongside a team of search-and-rescue personnel, parsing through the remains of the partially demolished Champlain Towers South condo building.

“There have been a lot of stressors, and what better way to soothe the soul than a thank you from a child?” Blanco said, adding that the most challenging part of the rescue effort has been coping with the emotional toll of uncovering the victims. He said the cards from children have served to “soften the blow.”

Blanco tucked the note away in his bag for safekeeping and watched as fellow first responders received their own handwritten tokens of appreciation. Some saved theirs to read during a lunch break, while others opened them in the middle of hauling supplies.

So far, nearly 500 thank-you letters and notes of encouragement, crafted by children of all ages from near and far, have been hand-delivered to first responders at the scene of the tragedy, with hundreds more expected to pour in as the search for victims continues.

The idea for the cards was inspired by Democratic Florida state Sen. Lauren Book and her 4-year-old twin children, who wanted to show their support amid the crisis.

Book had just returned home from visiting the site of the fallen condominium, when her children — Kennedy and Hudson Byrnes — said: “Mommy, where were you? Why do you smell like fire?” 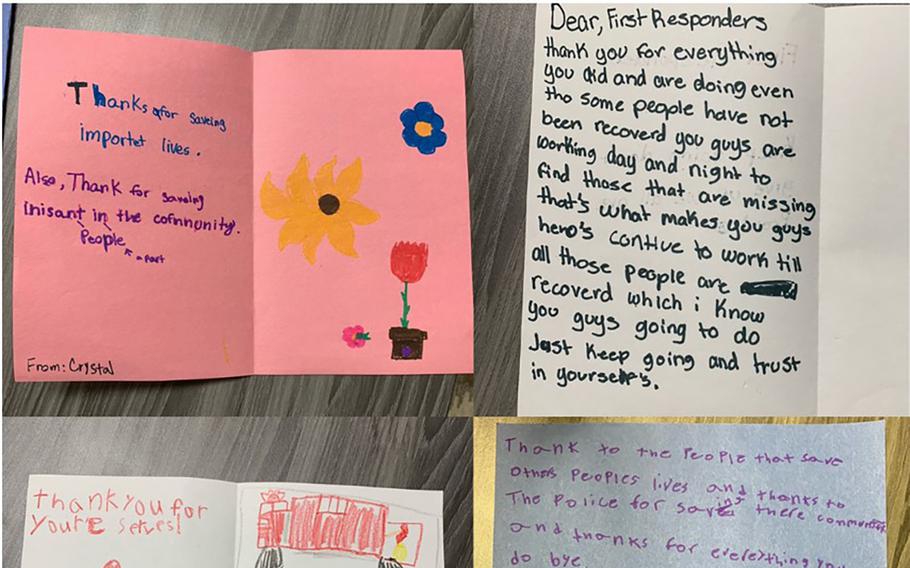 Cards written by children for search-and-rescue workers in Surfside, Fla., following the deadly condominium collapse. Kids across the state and beyond have crafted nearly 500 notes, all of which are being hand-delivered to first responders. (Courtesy of Lauren Book)

In as simple terms as she could, Book explained the catastrophic collapse.

“There was a building that fell down and people got hurt, and mommy was there trying to help. The firefighters and police officers were working really hard,” Book, who lives in Plantation, Fla., about 20 miles from Champlain Towers South, recalled telling her children. “I’m a big Mr. Rogers person, and one of the things I always try to talk to my kids about, in any scary situation, is to look for the helpers.”

Motivated by the dedication of rescue workers, Book’s twins thought they could become helpers, too.

They spent the day at their dining room table with a big bin of crayons and construction paper, creating about 50 cards, each one covered with colorful doodles, hearts and simple messages of gratitude their mother helped them write.

“We are making cards so they don’t get sad,” Hudson said of the rescue workers.

Book brought the pile of cards to the site the following day and handed them to any first responders she came in contact with. Many of them, she said, instantly cried.

While reading the cards, “they take this deep sigh,” Book said. “It’s a small piece of relief and a sign that somebody is there sending them a hug.”

Book has been at the scene every day since the collapse and has witnessed the immense pressure and pain first responders have endured throughout the rescue effort.

“You can see the suffering on their faces. There is so much tragedy,” Book said. Over a week into the rescue effort, “There’s a lot of hope that’s lost, and there’s a lot of anger, suffering, uncertainty and frustration.”

Jack Landau, a first responder working at the condo site who also assisted in the recovery effort after the Sept. 11 attacks, reinforced the intense emotional anguish he and his fellow rescue workers are facing — and the genuine sense of relief and hope the cards provide.

“The structural collapse was worse than anything we’ve seen,” said Landau, 59, who is volunteering with ZAKA Search and Rescue, a nonprofit based in Israel that sent rescue workers to help in the Surfside collapse. “The only good that we saw from this is the community. Everybody came together. To see kids writing such lovely cards, that gives us the courage to continue.”

Book handed him a letter on June 30, and it remains safely stowed away in his pocket.

“I will keep it with me and share it with my kids and grandkids,” he vowed. “They should see how the world is supposed to be. These small kids are our future heroes and leaders, and our future first responders.”

“It’s a treasure for me to hang on to,” said Martell, 56, a father of five adult children. “It came to me very personally, as if it was my own child who gave it to me. It’s something small but it really is significant.”

Receiving the card was especially moving, Martell said, considering that children were involved in the collapse, “and many of us have children ourselves,” including a Miami Fire Rescue official, whose own 7-year-old daughter was among the victims.

When Book saw the positive reaction that the letters elicited in the rescue workers, she mobilized to collect more cards. She posted on Twitter, asking for people to mail in notes of encouragement.

Cards soon started arriving at her office from children across the state, as well as some from around the country. Local day camps and elementary schools delivered several stacks at a time.

“People are dropping off cards by the dozen,” Book said, adding that together, she and fellow Democratic Florida state Sen. Jason Pizzo distribute the letters daily at the site. 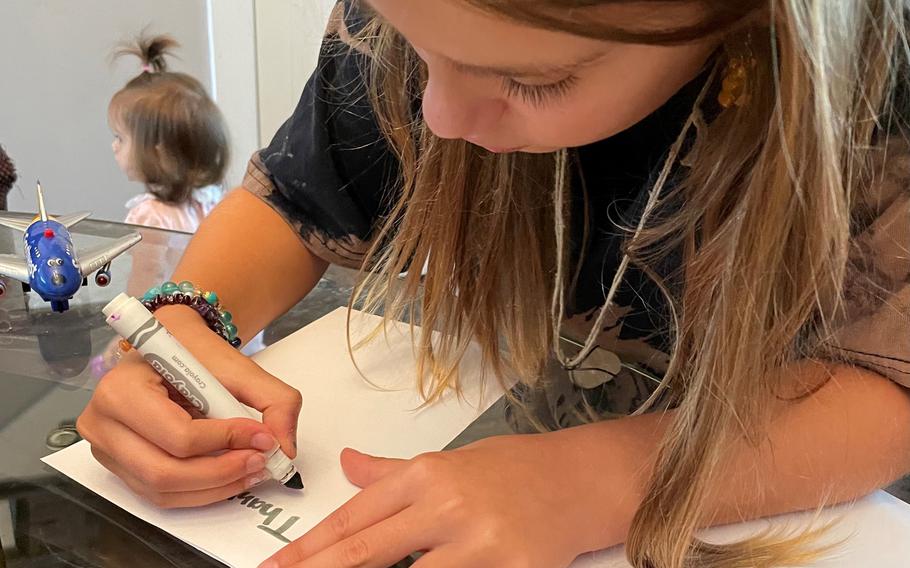 Valentina Carmona, 9, making cards at her home less than two miles from Surfside. She and her family know many of the residents at Champlain Towers South. (Courtesy of Lauren Book)

Multiple cards came from Valentina Carmona, a 9-year-old who lives less than two miles from Surfside. Like Hudson and Kennedy, she sat at her kitchen table writing a pile of notes. She and her family know many of the residents at Champlain Towers, including some from her school.

In the wake of her sadness, she said, making the cards has brought her comfort.

“I am so happy that so many people are working together to help Surfside,” she said. “I hope they know that they are appreciated, and these cards are my thank you.”

On white sheets of paper, Valentina used colorful markers to write: “Thank you for your service. You are a huge help!! Love: Vale.”

She also made special letters for those in the Israeli Defense Forces and United Hatzalah, who flew to Florida to assist with the rescue effort.

In blue marker, Valentina wrote “thank you very much” in phonetic Hebrew.

The card initiative spread on social media, where it caught the attention of Andi Gresham, a first-grade teacher at Mirror Lake Elementary School in Broward County.

She stumbled upon a post about the project on Facebook, and immediately contacted the principal of the school, who loved the idea. Although it’s summer break, Gresham shared the information with parents, and so far about 40 students have contributed letters. She collected 50 additional cards from children at a summer camp where she works.

“I’m hoping it will touch the first responders and let them know we appreciate everything they’re doing. I can only imagine what they’re going through and feeling every day,” Gresham said.

Crafting the cards, she added, is also a meaningful exercise for the students and campers, who range from prekindergarten to fifth grade.

“I’m hoping it gives them a sense of pride in trying to make someone smile and show support to others,” she said.

The cards have underscored that “every little bit helps,” Book said. “I think for little kids, sometimes the world seems so big and so scary, but all of us in any capacity have a way to help. This is a way for kids to understand that no matter how big or bad a situation is, they, too, can make a difference.”

Since Book first started soliciting letters from children on June 26, the initiative has expanded considerably. Given that the rescue efforts are ongoing, she hopes the notes of support will continue coming in.

“The cards give first responders some level of encouragement, which I think goes a tremendously long way,” Book said.

If even for a fleeting moment, the cards have served as a needed respite from the pain, Capt. Blanco said.

“We can heal wounds with Band-Aids, but we heal the soul with love, and there is nothing more pure than the love of a child,” Blanco said. “It is probably the simplest and greatest offering for a firefighter or first responder who has been in the trenches.”