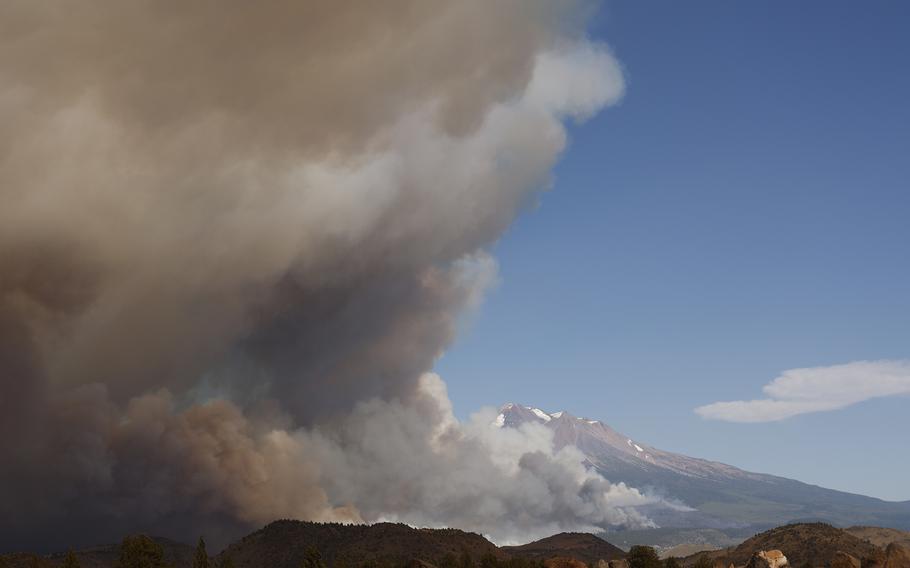 (Tribune News Service) — It’s now the biggest and fiercest wildfire to scorch California yet this season, but for a brief moment last week, fire crews thought they had the Lava fire beat.

They couldn’t have been more wrong.

Nearly a week before the fire had gotten so large that it spawned an ominous smoke cloud taller than Mt. Shasta, triggered widespread evacuations and led to a fatal shooting, fire crews left the Shasta-Trinity National Forest believing they had fully contained the blaze at just a quarter-acre in size.

The incident remains under investigation, but initial assessments suggest it is just the latest example of how drought and record heat are conspiring to heighten the danger, severity and unpredictability of this fire season.

In this case, the battle was further complicated by craggy volcanic formations and conflict with nearby marijuana growing operations.

“This fire stayed very small — until it didn’t,” said Adrienne Freeman, spokeswoman for the Shasta-Trinity National Forest in Northern California.

The fire was sparked amid a rash of 83 lightning strikes on the evening of June 24 in weather conditions that were similar to those that triggered last year’s devastating lightning siege.

The strikes ignited at least four fires, all of which were held to a tenth of an acre or less — except one.

The Lava fire was detected around 8:35 p.m., when emergency responders received a report of smoke in a remote area of ancient lava flows about 3.5 miles northeast of Weed.

Authorities weren’t quite sure whose direct protection area the fire fell into, so battalions from the U.S. Forest Service and the California Department of Forestry and Fire Protection both showed up, Freeman said.

By the time crews were able to get access to the fire and start their work, it was around midnight. They eventually determined the area was under federal jurisdiction and the Cal Fire battalion left, Freeman said.

Firefighters worked through the early-morning hours and all day June 25, putting a containment line around the blaze, she said.

Flames that take root in old lava flows are notoriously difficult to extinguish, however. “Essentially it’s layer upon layer of broken rock, with stands of trees and grass and shrubs worked into it,” Freeman said.

Helicopters that Friday dropped 7,920 gallons of water on the blaze in an attempt to saturate the nooks and crannies of the porous volcanic rock and penetrate the lava tubes that form networks of underground caves, which can harbor heat and flames, she said.

By about 4 p.m. June 25, fire officials believed the fire was extinguished, Freeman said.

“They take off their gloves and use their hands to try to detect heat,” she said. “And then they also look for visible smoke.”

The crews waited to see if anything popped up, then left around 6:30 p.m., she said.

About an hour later, authorities received a report of a glow in the vicinity, she said. They initially thought it was a new fire — so sure were they that the previous one had been extinguished.

But Forest Service crews discovered the fire had held over, and set about working on it all night, Freeman said.

Things grew more dire however, when winds began to pick up.

“That’s just something about Mt. Shasta, it’s very unpredictable,” Freeman said. “The winds are very erratic. The mountain actually makes its own weather.”

By the next morning, June 26, the fire had spread to about two acres and was 50% contained. Firefighters from multiple agencies poured in. The California Air National Guard and Nevada Air National Guard sent C-130 air tankers, marking the first June activation of military firefighting aircraft since 2012.

Despite their best efforts, the fire grew exponentially throughout the day as the wind pushed it uphill and temperatures rose. Nearby Mt. Shasta City broke daily records Sunday, Monday and Tuesday, with Sunday’s high of 103 degrees the hottest temperature recorded during June in the city’s history, according to the National Weather Service.

Residents watched in horror as the blaze swelled to 10 acres, then 80, then 220. Containment dropped to 25%. Evacuation warnings were issued for some areas. By Monday evening, they became evacuation orders. The fire jumped Highway 97.

Tensions boiled over into violence as law enforcement officers were helping to evacuate the Mt. Shasta Vista subdivision, which is home to a large complex of cannabis farms run primarily by Hmong families. Some have been battling Siskiyou County over water restrictions.

Around 8:30 p.m., a man allegedly tried to drive around a roadblock and pointed a handgun at officers, according to the Siskiyou County Sheriff’s Office. Sheriff’s deputies, as well as officers with the California Department of Fish and Wildlife and the Etna Police Department, shot and killed him, authorities said.

The Hmong man died in front of his wife and three children, according to a statement from Eric Alan Berg, an attorney who has represented some of the subdivision’s residents in legal matters.

In a bid to curtail illegal grows, the county in May passed an ordinance banning trucks carrying more than 100 gallons of water from traveling on certain roads. Some of the residents have decried the ordinance as racist because the roads are in primarily Hmong areas.

Even when the fire neared the subdivision, water trucks were still being blocked from entering, Berg said, and an investigator with his law firm witnessed “residents trying to fight the fire with dirt, using shovels and even their bare hands.”

Firefighters were refraining from actively fighting the fire there as of Tuesday afternoon, Berg said, referring to the incident as a “humanitarian crisis.”

A spokeswoman for the incident management team handling the fire refuted that.

“Crews had to vacate the area during the time of the officer-involved shooting, for safety reasons, but as soon as the area was deemed safe again they were back in the area, engaged in fighting fire,” said Michelle Carbonaro, public information officer with California Incident Management Team 14. “It was a very short period of time.”

By Tuesday morning, the fire covered 13,330 acres and was 19% contained, sending up a huge column of smoke as it chewed through dry brush.

“When a plume-dominated fire gets wind on it, that’s when you get that really significant fire spread,” Freeman said.

Intense fires can heat up the atmosphere so much that the smoke plume rises and creates a pyrocumulus cloud, said Brian Nieuwenhuis, meteorologist with the National Weather Service in Medford, Ore.

“If you can get the right atmospheric conditions at the same time, it basically creates its own sort of circulation,” he said. “I’ve heard people refer to it as a large heat pump before because it’s taking all the heat and shooting it up into the atmosphere.”

At one point Tuesday, the pyrocumulus cloud generated by the Lava fire grew to 38,000 feet — more than twice as tall as Mt. Shasta itself, according to the weather service.

Such clouds can result in a self-reinforcing feedback, in which the fire’s size and intensity create a weather system that makes the fire grow even larger and more intense, said Daniel Swain, a climate scientist at UCLA.

“Those are the conditions under which the fires can become somewhat self-sustaining,” he said. “They generate stronger winds near themselves.”

Predictable conditions are key to guiding firefighters’ decision-making. They know that in a typical river drainage, winds will blow upslope when temperatures warm in the afternoon and downslope when things cool off, Freeman said.

By contrast, she said, “there is no predictability on Mt. Shasta.”

By Friday, the fire was 23,849 acres and 27% contained, as crews were assisted by calmer winds and cooler temperatures, Carbonaro said. Evacuation orders had been downgraded to warnings. No fire-related deaths had been reported. A county-led team was working to conduct an official assessment of structure damage.

The area where the fire started has a history of fairly frequent blazes, but firefighters have generally been able to keep them quite small, Freeman said.

Once they’re no longer so busy fighting fires, authorities will go back and try to determine why this time was different.

One possibility, Freeman said, was that the fire was carried through the root systems of the plants that grow in the lava rock.

“The root systems are atypically dry — it is unusual for us to see fuel conditions like this at this time of year,” she said. “If they are dry enough they will carry fire or heat that is undetectable from the surface.”

That could mean the response would have been sufficient to contain the fire in most years but simply couldn’t hold up to this season’s extreme conditions.

UCLA’s Swain calls this mismatch between time-honed expectations and conditions that are increasingly producing fire behavior no one thought to be likely shifting baseline syndrome.

There are a variety of reasons for it, he said, but chief among them is the fact that climate change has driven more intense fires that become larger more quickly than they used to.