Wally Funk was supposed to go to space 60 years ago. Now she’s going with Jeff Bezos. 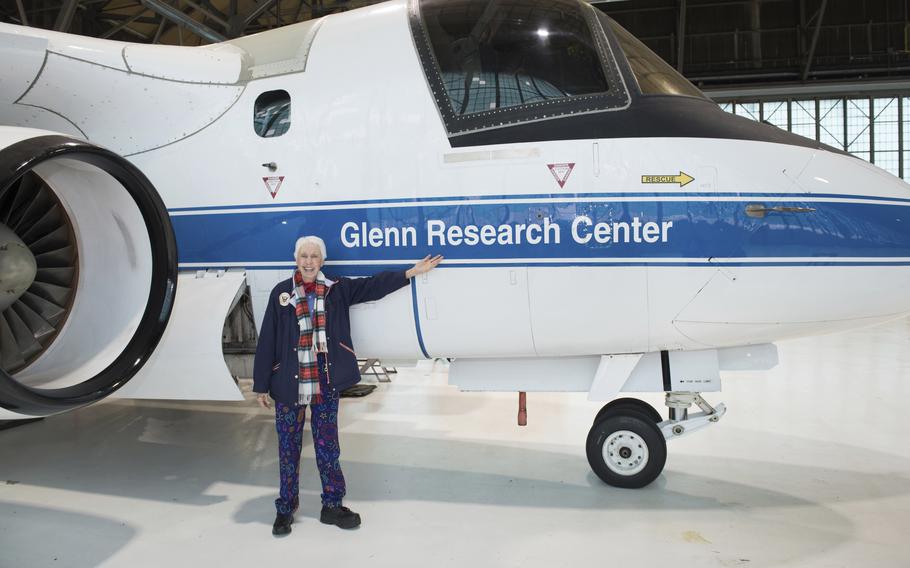 In this 2019 photo made available by NASA, Mercury 13 astronaut trainee Wally Funk visits the Glenn Research Center at Lewis Field in Cleveland, Ohio. On Thursday, July 1, 2021, Blue Origin announced the early female aerospace pioneer will be aboard the company’s July 20 launch from West Texas, flying as an “honored guest.” (NASA)

By most accounts, Wally Funk should have been to space by now.

In 1961, Funk was the youngest member of the “Mercury 13,” a group of 13 women privately tested and trained by a team of aviation medical experts for NASA’s astronaut program at the height of the space race. But the program, which put the women through the same rigorous testing as the Mercury 7, NASA’s all-male team of original astronauts, was canceled.

Sixty years later, Funk, 82, is poised to become the oldest person to reach space. Jeff Bezos announced in an Instagram post Thursday that Funk would be joining him, his brother, Mark, and the unnamed winner of an auction aboard Blue Origin’s first crewed spaceflight on July 20, the anniversary of Neil Armstrong and Buzz Aldrin’s Apollo 11 moon landing in 1969.

Funk is a pioneer in aviation: She was the first female Federal Aviation Administration inspector and first female National Transportation Safety Board air safety investigator. She has logged 19,600 hours of flight time and taught more than 3,000 people to fly, she said in Bezos’s Instagram video.

“Everything that the FAA has, I’ve got the license for,” Funk says in the video. “And, I can outrun you!”

In the Instagram video, Bezos describes the plan for the New Shepard’s journey to a wide-eyed Funk, down to the moment when the rocket returns to the desert surface and its doors open.

“We open the hatch, and you step outside. What’s the first thing you say?” Bezos asks Funk. She does not hesitate.

“I will say, ‘Honey, that’s the best thing that ever happened to me!’ “ Funk declares, pulling Bezos into a bear hug.

Funk is Bezos’s “honored guest” on the flight, which will also be joined by the winner of Blue Origin’s auction for his company’s nonprofit foundation. Nearly 7,600 bidders from 159 countries participated in the auction, which topped out at $28 million. (Bezos, the founder of Amazon, owns The Washington Post).

As a young girl, Funk used to jump off the roof of her parents’ barn in a Superman cape, pretending to fly. She loved to build model planes and ships, became an “expert marksman” at 14 and skied competitively for the United States in slalom and downhill races. She has been flying since 1957. She is also an antique car enthusiast and “avid zipliner,” according to her website.

When NASA finally opened its programs to women in 1976, Funk applied three times and received three rejections. But she has never been the type to let anything stand in her way, she says in the video.

“I like to do things that nobody has ever done,” Funk said.

The July 20 flight would have made Bezos the first of the billionaire “space barons” to go to space, a significant milestone for him and Blue Origin, which lags behind Elon Musk’s SpaceX in the competition for billions of dollars in NASA and Pentagon contracts and which flies a more powerful rocket capable of taking people and supplies into orbit.

But hours after the announcement that Funk would be on the flight, Virgin Galactic’s Richard Branson, who will turn 71 on July 18, announced that he plans to be aboard his company’s space plane on its next test flight, now scheduled for July 11. That would place him in space ahead of Bezos.

Bezos has long been fascinated with space. An avid science fiction reader and big “Star Trek” fan as a child, he has called watching the Apollo 11 moon landing a seminal moment for him, even though he was just 5 years old at the time. He chose “Goddard” as the middle name for one of his sons in homage to Robert Goddard, the founder of modern rocketry.

The New Shepard is named for Alan Shepard, who became the first American to go to space in 1961. Like that first suborbital flight, New Shepard shoots straight up, flying past 60 miles to reach the edge of space before falling back to Earth. The flight takes about 10 minutes in all, with a few minutes of weightlessness in space.

Neither Musk nor Virgin Galactic’s Richard Branson have ridden on their companies’ rockets, though there’s speculation Branson may be trying to beat Bezos with a secretive launch in the coming weeks. In late June, Virgin Galactic won FAA approval to take customers to space, making it the first spaceline to cross that hurdle.

In 2010, Funk put down $200,000 for a future Virgin Galactic flight. She has spent years waiting and visiting Spaceport America, anticipating what she thought would be her first trip to space. But by the time she gets to cash in that ticket, she will already be an astronaut.

The Washington Post’s Christian Davenport contributed to this report.