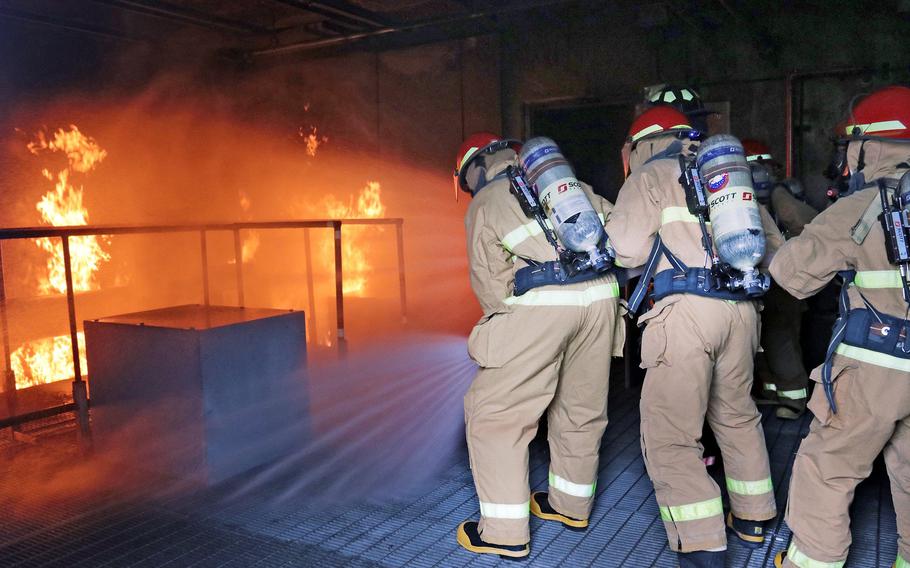 JACKSONVILLE, Fla. (Tribune News Service) — The water was already up to their knees as they splashed into the steel compartment where water gushed from pipes as well as a gouge in a wall.

“Wow, ice cold,” yelped one midshipman as they plowed through roiling water in a sinking-ship simulator at Naval Station Mayport.

Three forced their way into one pipe’s powerful spray to seal a jagged break as five others hefted a jack to seal off an overhead leak, and one more hammered wooden wedges into the gouge.

“Go, go, go,” yelled damage control officer Ahmad Alford above the roaring water, pointing to a valve. “Get it unstuck. Do what you need to do! ... Use your brains!”

The ship may have been a mockup. But it was complete with damage control and repair stations and thousands of gallons of gushing water, all to teach midshipmen what to do when a hull is holed. And the realistic training was part of a drill that began before dawn as 75 second-year NROTC midshipmen braved flames and flood as part of Sea Trials 2021.

From classroom training and obstacle courses at Jacksonville University’s NROTC program to the simulators, these midshipmen were demonstrating the skills they have learned in two years. And after being stuck on Zoom classes during last year’s COVID-19 outbreak, Baltimore midshipman Elisabeth Swift said it’s time to get back into physical training versus being stuck behind a desk all day.

“The obstacle course is the toughest for me. I don’t have much like that to practice on at home,” she said. “It was nice to have experience with it earlier in the week, but it was still difficult.”

Ben Lyday said he is undergoing Navy officer training because it will help him “become the man I need to be.” Being able to work on actual fire and flooding simulations was energizing as he remembered last year’s video classrooms.

“It was really easy to lose motivation in the past year and a half because there’s really no relationship with the Navy at all,” the Atlanta resident said. “Trying to understand what the mission is and why you are trying to be this person is hard to grasp when it’s virtual.”

The NROTC program is designed to develop mental, moral and physical training as men and women work toward college graduation, then a commission as Navy or Marine Corps officers, the Navy says. Jacksonville University’s NROTC is one of four Florida universities that sponsor this training, part of 63 colleges and universities in the United States.

‘Are you going to save the ship?’

JU’s NROTC Unit has commissioned more than 1,680 Navy ensigns and Marine Corps second lieutenants for service in specialties including surface and submarine warfare, naval aviation and others. And along with JU’s classroom training and a Marine Corps-designed obstacle course, the midshipmen also have access at Naval Station Mayport, Naval Air Station Jacksonville and Naval Station Kings Bay in Georgia.

It can be a tough task for the young men and women, who all went through versions of these scenarios before everything was ramped up this last day, chief damage control officer Nolan Freyoux said.

“We throw in different things like a personnel casualty just to see how they are going to react at the end of it if they have to make that life decision,” Freyoux said. “... We ask them what are they going to do — are you going to make that decision to save a sailor as the space is flooding out, or are you going to save the ship?”

Every one of the 10-day training events began with 3 or 4 a.m. reveille, then obstacle course runs before breakfast. Tests were mixed with pistol range training, ship handling simulators, swim qualification and a helicopter fire. There were tours of area bases as well as the USS Paul Ignatius and USS Lassen guided missile destroyers and two helicopter maritime strike squadrons. Firefighting and flood control training were held during the 10 days.

It was like a blast furnace inside the firefight trainer, NROTC members wearing heavy bunker gear plus air tank and mask as steel doors opened on a propane-fueled inferno.

“Man the hose,” the instructor yelled as they lined up, steam billowing as water pummels the fire. Followed by a full-force flooding exercise, it all prepares them for the real thing, which could happen at any time in their careers, Freyoux said.

“They are all pretty tired now, being up all morning,” Freyoux said. “Each one is their own person so we have to motivate each of them a little differently. But they are very eager and motivated to get through this.”

Senior Chief Jesse Kenner said the officer candidates did well as the last day wrapped up, showing they had absorbed all the instructors had thrown at them in the past week. And sometimes, these days of training with fire, flood and obstacle course can reinforce their course into the Navy or Marines, he said.

“They get to come here and do hands-on training for all this equipment and try stuff they will be doing in the future,” Kenner said. “It’s a good opportunity to reflect, to really see where they stand against the evolutions we do every day in the fleet. This is their chance to try it and learn if this is the right career path for them.”

Sea Trials 2021 ended with one more run around the obstacle course, then graduation and a cake before students headed home.