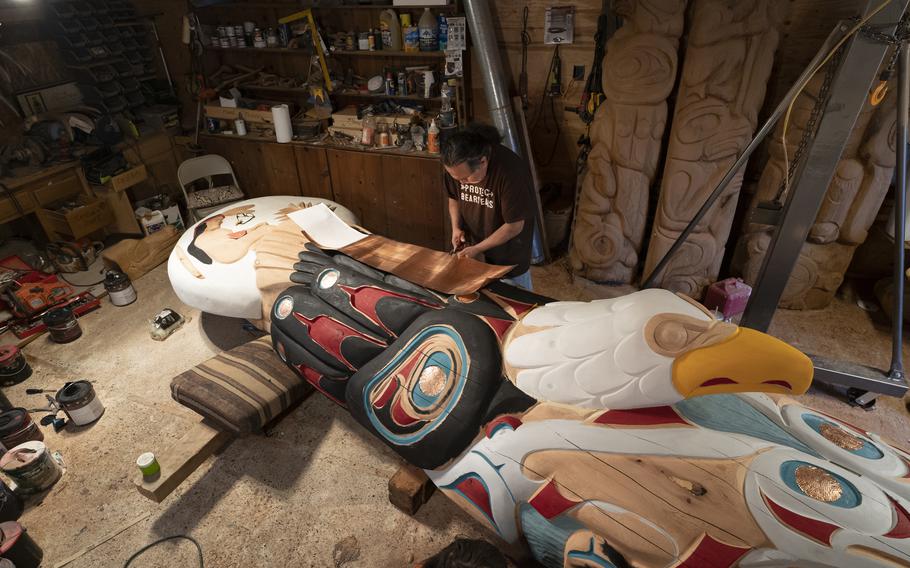 Jewell James of the Lummi Nation works on a 25-foot totem pole he helped make as head carver for the "House of Tears" carvers. The pole is making a cross-country trip with a crew of travelers in July from Washington state to Washington D.C. to raise awareness about Native American issues and sacred sites. (Jason Jones/The Natural History )

WASHINGTON - A 5,000-pound totem pole that was hand-carved by Native Americans is coming from Washington state to be on display in the nation's capital this summer after a journey that organizers hope will raise awareness about protecting land that is sacred to tribes.

The totem pole's journey on a tractor-trailer, which organizers are calling the "Red Road to D.C.," involves a two-week trek led by about a dozen people, many of whom are Native Americans and members of the Lummi Nation, a tribe of about 5,000 members west of Bellingham, Wash. The tribe, along with support from dozens of nonprofit groups, museums, other tribes and sponsors, has raised about $130,000 for the cross-country trip.

In preparation for the journey, the group took the pole on a tour this spring along the West Coast and parts of the South. Group members will hit the road again in mid-July, arriving in the nation's capital by July 29. The pole will be on display for two days on the Mall and outside the entrance of the National Museum of the American Indian.

Native American organizers said they plan to "deliver the pole to the Biden administration in hopes that it gives a strong and important message." Arrangements are being made to find a permanent home for it in D.C., organizers said.

On their road trip to D.C., the caravan plans to stop at several spots of importance to Native Americans, including Chaco Canyon National Historic Park in New Mexico, the Standing Rock Indian Reservation in North Dakota and Bears Ears National Monument in Utah. Each faces threats of development tied to natural resources or pipelines.

For Jewell "Praying Wolf" James, a Lummi Nation elder and the master carver of the pole, it is "a reminder of the promises that were made to the first peoples of this land and waters." He said he hopes that "we all share to safeguard the sacred sources of life - Earth, water and sky - for generations to come."

The idea came from Phreddie Lane, a Lummi Nation citizen. He said he is "proud of how strongly Native Americans had come out to vote in swing states in the last U.S. presidential election" and he wants the new administration to "hear our message" of concern about issues important to Native Americans and, in particular, worries about sacred sites being harmed.

"It's a very historic moment to bring it to D.C.," Lane said. "And to have it sit among these sacred national monuments, representing Native American peoples, is special."

White House officials said Friday they are aware of the totem pole's journey to Washington.

Totem pole carving is a tradition for some tribes, mainly in British Columbia and the U.S. Pacific Northwest. They often are said to be a "spiritual being" and are considered sacred symbols of a tribe, clan or a family tradition, experts said.

For the Lummi Nation, totem poles historically are carved with symbols that represent a certain "clan of a tribe" or show a family or tribe's lineage. They can have scenes that depict an important tribal leader or might have a panel that shows a tribal battle or a story told for generations, James said.

"They represent visions, dreams and stories that are handed down and shaped through each generation," he said.

Standing 25 feet tall and measuring about 43 inches wide, the totem pole that's coming to D.C. was made from a 400-year-old Western red cedar tree. The tree was cut, carved and painted with images and symbols that include a moon, salmon and a man praying. One drawing shows an eagle "headed downward in a dive to the Earth," representing a Lummi belief that the eagle is "bringing the spiritual power to impregnate the Mother Earth."

It contains an image of a woman with a girl kneeling near her, a scene meant to depict grandmothers across the country who are raising and teaching their granddaughters traditional Native American ways, James said.

Seven tears are near the image, which James said represents seven generations of Native people throughout the world who have been "traumatized by the treatment they received from non-Indians."

Another area contains a red hand to bring attention to the hundreds of indigenous women who are murdered or go missing each year.

The group has created 110 totem poles over three decades that range from 3 feet to 28 feet, he said. Most are given to schools, homes for veterans or other places in Washington state. Others recognize tragedies like the Sept. 11, 2001, terrorist attacks. A 13-foot totem pole at Congressional Cemetery in D.C. honors victims who were at the Pentagon that day.

This summer will be the first time the group has made and moved such a large totem pole. In the past two months, it has been on a West Coast tour, on display for tribes and stopping at community events.

Beka Economopoulous, director of the Natural History Museum in Washington state, which has been involved with the totem pole project, said the West Coast travels have brought crowds of people to events who lay their hands on it and pray.

"It's going to carry the spirit of the land it visits and the power and prayers of the people along the way to the symbolic heart of the nation," she said. Economopoulous said keeping the pole in D.C. would make it a "monument to the protection of sacred places and a way of relating to the land."

Elena Guarinello, an exhibition developer and manager at the National Museum of the American Indian, said graphics and panels inside the museum will explain the totem pole's significance and its journey.

Judith LeBlanc, director of the Native Organizers Alliance, said bringing the pole to the nation's capital will encourage national leaders to "recognize what their ancestral responsibilities are."

"We sat nation-to-nation and signed agreements," LeBlanc said. "We gave up land that mattered in order to receive health care, education and housing. Those treaty rights have been denied all through history."

LeBlanc said she hopes the White House will "create a whole new reset with tribal nations by bringing us to the table to not just consult, but to come up with solutions" to protect land and water resources on sites sacred to Native Americans.