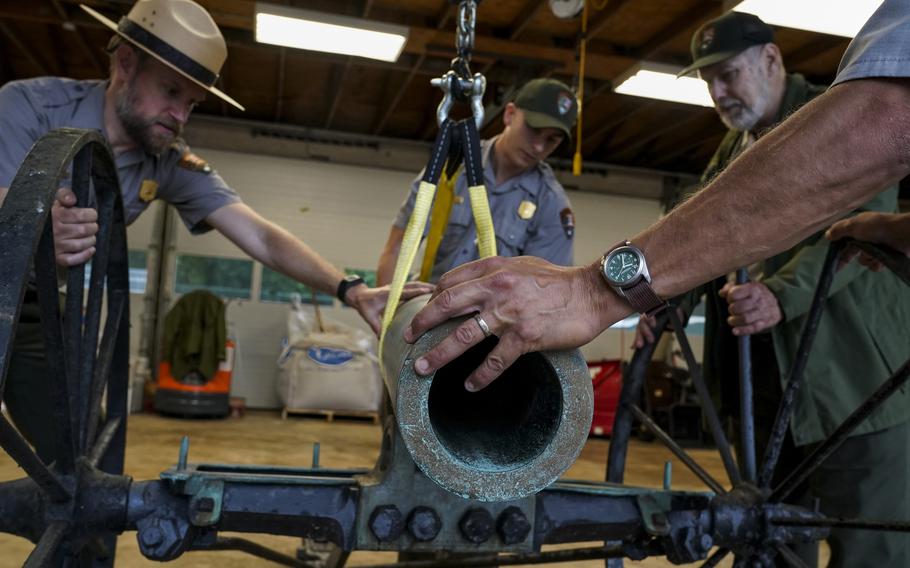 The two bronze guns had been given to Army Capt. A. Van Horn Ellis, of Company I, and with a battle brewing outside Manassas, Va., he and his men had to get them from the Washington Navy Yard to the battlefield 30 miles away.

They were elegant Navy artillery pieces, with an anchor insignia likely stamped on the barrel. But they weighed 1,200 pounds each, had three wheels and were not designed to be pulled by horses.

So over several days in the oppressive summer heat of 1861, the men of the 71st New York State Militia dragged them by hand across the rugged Virginia countryside to the Battle of Bull Run on July 21.

There, in the chaos of the Civil War’s first major battle, the guns were lost to the enemy.

On a rainy day last week, in a National Park Service maintenance garage in Manassas, experts used an engine hoist to lift the bronze gun barrels of two newly acquired Navy artillery pieces from their wrought iron carriages to prepare for restoration.

They, too, were elegant. Both had an anchor insignia stamped on the barrel. And one bore the legend, “12 Pdr Boat Howitzer 1856” and “U.S.N.Y. Washington.”

They had sat outside the old Fairfax County Courthouse since about 1904, until they, and a memorial to a Confederate officer, were removed last November by order of the county supervisors.

Now the park service is wondering if they might be the same guns Ellis used, returned to where they were abandoned 160 years ago next month.

“I think it is fair to say that it is possible,” said Brandon Bies, the Manassas National Battlefield Park superintendent.

The 1861 Battle of Bull Run was a disaster for the Union Army, which fled from the field in panic, abandoning equipment as it ran. Among the loot that fell to the victorious Confederates were Ellis’s guns, left behind in the massive post-battle traffic jam.

Park Service historians said they don’t know what happened to them after that.

But Manassas National Battlefield Park Museum Specialist Jim Burgess believes “it’s very unlikely” they are the same guns the park service is about to restore.

“They are basically the same type . . . presented to the 71st New York militia,” he said last week.

He said records show that one of the guns, while manufactured at the Navy Yard, was assigned to the USS Lancaster. And scant documentation is available for the other. 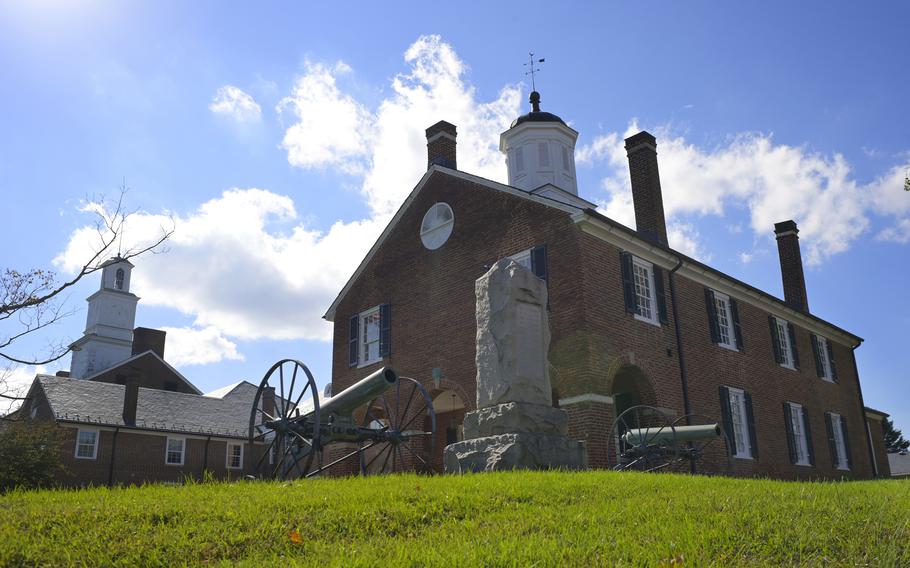 Last year, the Fairfax County Board of Supervisors voted to remove the Civil War memorial, flanked by two howitzer cannons, that had sat outside the old courthouse grounds. The guns have been turned over to the National Park Service. (John McDonnell/The Washington Post)

“There’s differing opinions on the history, the likelihood, that sort of thing,” Bies said last week. “We certainly cannot, at this point, conclusively prove that either of these were here at the battle.”

“Part of the really neat part of this is that they are rare, and we were able to procure two of them,” he said.

Only 51 such boat howitzers are known to survive. Plans are to restore the weapons and place them on the Bull Run battlefield.

“We know exactly where” Ellis’s guns were, Bies said. “So to put two of a rare type of gun . . . [and] match what was there on that spot is a really neat opportunity.”

The 1861 battle - the first of two on the site during the war - was a legendary fiasco for the Union.

Hordes of picnickers and VIPs - with parasols and opera glasses - traveled by horse and wagon from Washington to see what they were sure would be a grand spectacle, a triumph for the North and the only battle of the war.

The 71st New York had left the Navy Yard on July 16, hauling the guns it had been given on July 8 by their designer, John A. Dahlgren, who commanded the yard, Burgess said.

A dozen men may have been required to drag each gun, he said. And other men in the company had to tote ammunition. “Thirty miles in the July heat,” he said.

They reached the battlefield about 11 a.m. on July 21 and were positioned on Matthews Hill, Burgess said. Their two guns joined 18 others that battered the Confederates into retreat.

Assuming the battle won, the brigade to which the 71st was attached was granted permission to withdraw and rest. Two men from Company I were killed and two had been wounded. (Ellis was killed at the Battle of Gettysburg two years later.)

But then Confederate reinforcements arrived. Green Union soldiers panicked, and the rout was on. Terrified Yankees jammed the roads back to Washington, along with fleeing picnickers and politicians.

One northern legislator, U.S. Rep. Alfred Ely of New York, was captured by the rebels and nearly shot by an enraged Confederate officer who pointed a gun and shouted: “I’ll blow your brains out!”

The 71st joined the retreat, still encumbered with its guns, and headed along the macadamized Warrenton turnpike - now Route 29 - toward Centreville, Burgess said.

But when it reached the narrow suspension bridge over a stream called Cub Run, the span was blocked by an overturned wagon and other debris.

The banks of the stream were too steep to maneuver the guns across, so they were left.

Burgess said it’s not known what Confederate outfit got the guns, where they might have been used later or even if they survived the war, which ended in 1865.

Forty-three years after the battle, on the rainy Wednesday of June 1, 1904, a nine-foot-high granite marker commemorating the death of John Quincy Marr, an early Confederate casualty in the war, was unveiled on the old Fairfax courthouse green.

Spectators crowded into the courthouse because of the weather. An orator hailed the South’s role in the war. After dinner, former U.S. Sen. Eppa Hunton, who as a young rebel officer had fought at Bull Run, spoke.

The two guns may have been in place at the unveiling, or were installed a few years later. Bies said they appear on the site in a postcard from around 1916. It’s not certain where or how they were acquired.

The unveiling came at the height of Confederate “Lost Cause” monument building in the late 1800s and early 1900s, and was reported in newspapers across the country.

Three other Confederate courthouse monuments were unveiled in Virginia the same year, and six the year after that.

But 116 years later, following last year’s nationwide protests over racial inequality and the murder of George Floyd by a Minneapolis police officer, a wave of Confederate monument removals took place across the country.

On Nov. 5, the Marr memorial and the two cannons that flanked it were removed.

“Monuments are declarations of our values,” said Fairfax County Supervisor Dalia Palchik, a Democrat. “This monument does not reflect the values of our richly diverse community.”

The monument was given to a local historical society.

The Park Service expressed interest in the cannons, knowing the type’s connection to the battle.

Others wanted them, too, including the Navy, Burgess said. “We were afraid that we might not get them,” he said.

But the Park Service prevailed and received the guns in March.

Last Friday, they were taken apart, perhaps for the first time in more than a century.

The gun barrels are still in good shape, but the iron carriages are not, Bies said. A conservator is scheduled to start treating the metal to eliminate rust and old paint.

“It’s all worked out well,” said Jason Edwards, a Park Service maintenance team leader. Now the task was to get them out on the field for the anniversary of the battle next month.

“That’s going to be really, really great to see,” he said.

The guns are scheduled to be unveiled on Matthews Hill at 10 a.m. on July 17.

The Washington Post’s Antonio Olivo contributed to this report.