WASHINGTON — The Federal Reserve expects inflation will climb to 3.4% this year, higher than the central bank’s previous forecasts, while also projecting for the first time that there could be two interest rate hikes in 2023.

The predictions, released Wednesday after the Fed’s two-day policy meeting, depict a delicate narrative of where central bankers think the economy is headed. In the near term, prices are rising fast, and for certain goods and services, backlogged supply chains can weigh on prices for some time.

Meanwhile, the Fed expects the labor market will continue to build strength. And while the Fed isn’t ready to stem inflation by raising interest rates just yet, Chair Jerome Powell sent the message that the Fed is attuned to rising prices and keeping a close eye.

“Shifts in demand can be large and rapid,” Powell said at a Wednesday news conference. “Inflation could turn out to be higher and more persistent than we expect.”

And he added that the Fed would be ready to respond quickly if inflation is broader or more persistent than projected.

As recently as March, the Fed predicted inflation would be 2.4% for this year. Moreover, earlier Fed estimates didn’t project an initial interest rate hike until 2024. Those predictions got a serious revamp Wednesday.

Powell’s remarks come as the Fed and White House are facing increasing criticism from the GOP and some economists that trillions of dollars of stimulus spending, combined with low interest rates and the Fed’s other economic supports, are now overheating and endangering the economy. Indeed, recent benchmarks have shown an increase in consumer prices, including for products like used cars and lumber. However, officials from the Fed and Biden administration say those increases are largely expected, as the economy emerges from the sharp, pandemic-induced downturn, when prices had fallen.

On Wednesday, Powell said he expected certain categories — such as planes, hotels and lumber — to see their prices simmer down over time.

“We expect those prices will get back up to where they were, but there’s no reason to think they’re going to keep going up a lot,” Powell said. “Because if they are, people will build new hotels; there’s no reason for supply and demand to be out of whack in the hotel business over any period of time.”

Yet Republican lawmakers argue that the Fed will be behind the curve when it decides to raise rates, and that inflation will rise to dangerous levels in the meantime.

“We are seeing substantial increases in inflation, which means the prices of everyday goods are going up for families in Florida and across the nation,” Sen. Rick Scott (R-Fla.) said. “Government shouldn’t work this way.”

“As the economy is opening back up again, prices are now moving back toward normal levels in leisure, hospitality, airfare and the like. In most cases, prices remain below pre-pandemic levels — but they’re rising, and that’s some of what’s going on here,” Yellen, the former Fed chair said. “We’re going to monitor this very, very carefully.”

The White House budget predicted 2% inflation for this year, an estimate based on projections from February that were in line with those of Wall Street analysts. Yellen said Wednesday that the White House’s mid-session budget update — likely to come this summer — would be revised upward as inflation outstrips expectations. She also acknowledged that businesses were struggling to hire workers.

The Fed’s latest projections come as the central bank wrestles with when to pull back on its support for the financial markets, which helps the broader economy. As expected, the Fed kept interest rates near zero.

Investors and economists are searching for any small signs that the Fed is more seriously looking to pare back its asset purchase program, which buys $120 billion in bonds every month. Fed leaders aren’t ready to pull back the support just yet, but there are plenty of questions about when and how it will signal openness to a slowdown.

Powell and other Fed leaders hope those signs land gently. And they know the cost if there’s more of a thud. In 2013, Fed Chair Ben Bernanke hinted at a wind-down in asset purchases that the Fed began because of the Great Recession. A panic in the markets ensued, triggering the infamous “taper tantrum.”

On Wednesday, Powell said that Fed policymakers were “talking about talking about” tapering and that there would be plenty of advance warning. He also drew a clear line between scaling back asset purchases and eventually raising interest rates, also known as “liftoff.”

“Liftoff is well into the future,” he said. “We’re very far from maximum employment. It’s a consideration for the future. The discussion now is about the path of asset purchases.”

In a statement released after the meeting, Fed officials said progress on vaccinations had helped reduce the spread of the coronavirus.

The Fed also improved its estimates for economic growth. Fed officials expect GDP to grow by 7% this year, compared to 6.5%, when the last set of projections were released in March.

The Fed won’t raise interest rates until there’s been significant progress in the labor market, which is down at least 7 million jobs. At its current pace, the labor market won’t recover its pandemic losses until the summer of 2022.

In certain pockets of the economy, a handful of overworked industries are short on help. Meanwhile, some workers are weighing the prospect of $15 an hour starting wage, or federal unemployment benefits, in their decisions about returning to work.

Fed officials didn’t change their expectations for the unemployment rate, which has been 4.5% by the end of 2021. Powell said that some people still aren’t returning to work because of ongoing fear of the pandemic, child care responsibilities and extended federal unemployment benefits.

But the Fed expects that unemployment will fall to the pre-pandemic level of 3.5% by the end of 2023.

“I am confident that we are on a path to a very strong labor market,” Powell said. 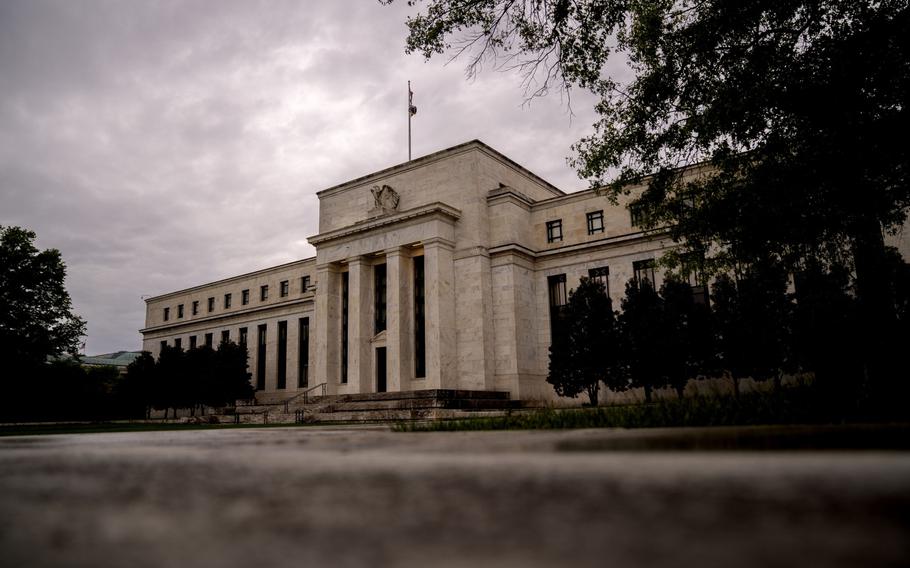