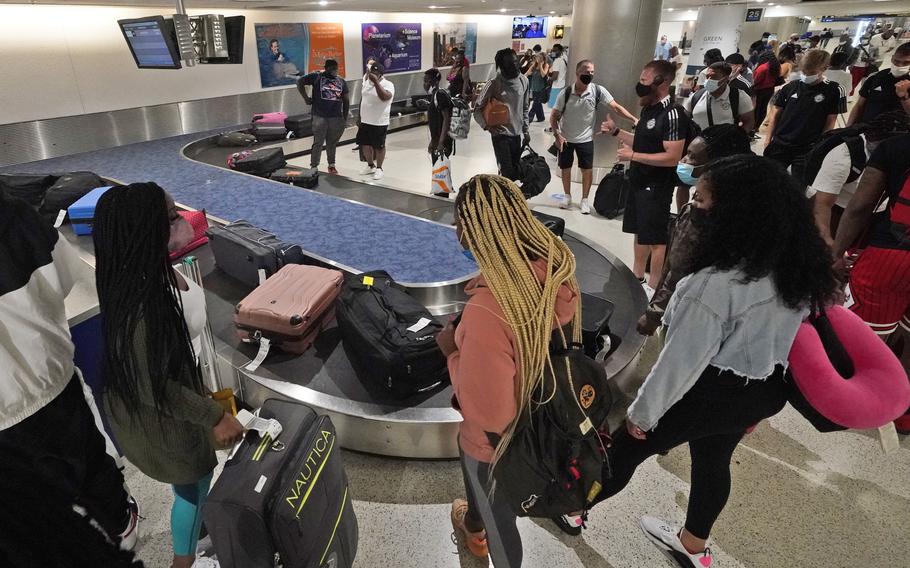 Travelers wait for their luggage at a baggage carousel at Miami International Airport on May 28, 2021. (Wilfredo Lee/AP)

A cross-country Delta Air Lines flight made an emergency landing in Oklahoma City on Friday night after an outburst by an unruly passenger, the third time in a week that the airline diverted a flight because of a passenger’s behavior.

Bystander video provided to The Washington Post shows a chaotic scene in the plane that was heading from Los Angeles to Atlanta. A person screams as several passengers pin him to the floor.

A flight attendant tells everyone except the people holding the person down to take their seats. “We can’t get forward with restraints if everybody’s in the aisle,” he said.

In another clip circulated widely on social media, a man yells as several people appear to wrestle him to the floor. “Keep him down, keep him down,” someone said during the struggle.

Flight tracking data from FlightAware shows the plane making a sharp northeastern turn after crossing the Texas panhandle and landing in Oklahoma City at about 10:30 p.m. Central.

It was not immediately clear what led to the incident or caused the passenger to lash out. Early reports and posts on social media suggested that the man had threatened to bring down the plane or open the plane door, but a Delta spokesperson told CBS News on Saturday afternoon that those assertions were incorrect. That passenger was using the intercom near the door, CBS reported, but was not attempting to open it.

In a statement to WSB-TV, Delta thanked crew members and passengers who “assisted in detaining an unruly passenger.”

“The aircraft landed without incident and the passenger was removed by law enforcement,” the statement read. “We apologize to our customers for the delay and any additional inconvenience this caused.”

On Thursday, a Delta flight from Los Angeles to New York was diverted to Detroit because of a disorderly passenger, CBS News reported.

On June 4, Delta diverted a Los Angeles to Nashville, Tenn., flight when, according to authorities, a passenger tried to breach the cockpit. The plane landed safely in Albuquerque, and the passenger was taken into custody by the FBI.

Hostile and aggressive behavior by airline passengers has been a growing concern for aviation regulators. Many airlines have grappled with customers who refuse to comply with mask mandates and other hygiene rules airlines have adopted during the coronavirus pandemic.

The Federal Aviation Administration said this year that it was reviewing about 450 cases of passengers misbehaving on flights and has opened 20 formal enforcement cases as flight attendants face pushback from people who do not want to follow the rules. One passenger is facing $32,750 in fines after refusing to wear a mask, throwing food and an empty bottle of alcohol into the air, and shouting obscenities at crew members during a JetBlue flight from the Dominican Republic to New York.