“This is a great way for kids to be introduced to aerospace type jobs,” said Randy Boadway, owner of eRockets on Springfield Street, which provides model rocket kits.

The teams, made up of high school and middle school students, were some of the top 100 teams competing in the finals across the nation.

Competitors must build a rocket, from scratch, that can carry an egg without breaking it. They have two flights in the championship, one that hits 775 feet and one slightly higher. The flights are also timed to between 40 and 42 seconds.

When there is not a global pandemic, the national competition takes place in Virginia. But this year the organizers of the challenge, the Aerospace Industry Association and the National Association of Rocketry, chose to have the competition over two weekends in June at several sites across the country.

The results will be recorded, and the winners of the competition will be announced in late June.

Cody Lovan, a middle school science and engineering teacher for the Richards R-V school district out of West Plains, Missouri, said a few kids on the team she helps mentor are considering careers in aerospace when they would not have before.

“So for me, it’s seeing them change; realize they can do things that they probably thought they couldn’t accomplish,” she said. “They are becoming rocket scientists, really.”

It’s not easy to make these rockets. For most teams, it takes at least one full school year to get a rocket ready for launch.

Dave Combs, president of Wright Stuff Rocketeers, a local rocket enthusiasts club that helped organize the Dayton area launch, said there’s a lot of factors for a team to consider. The temperature of the air, the level of humidity, how high they must shoot for during their launch, all require critical thinking and problem-solving skills.

“It’s real science and real application, and these are some exceptionally sharp kids,” he said.

The second day of the rocket competition at the museum is on Sunday. 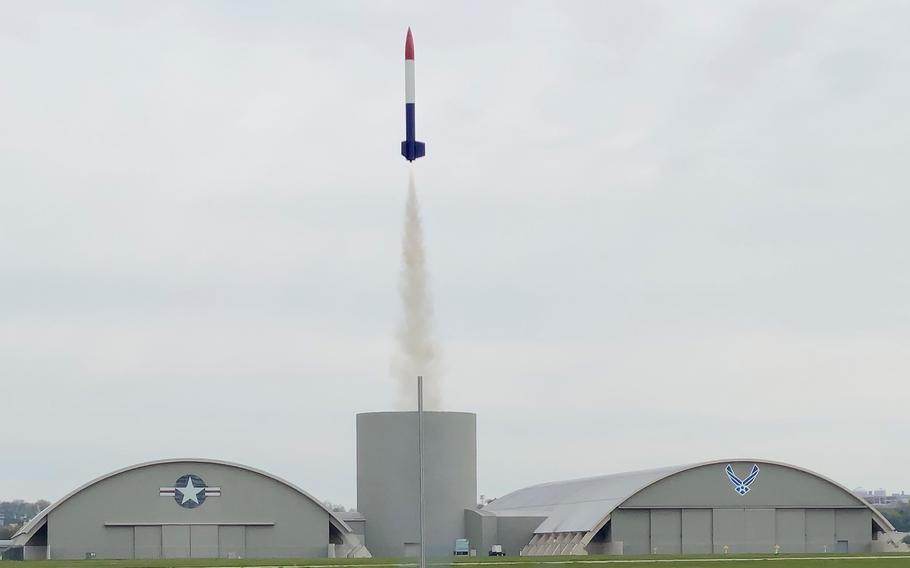