Op-eds in a Chinese state tabloid slammed US policy; the author works at the Pentagon 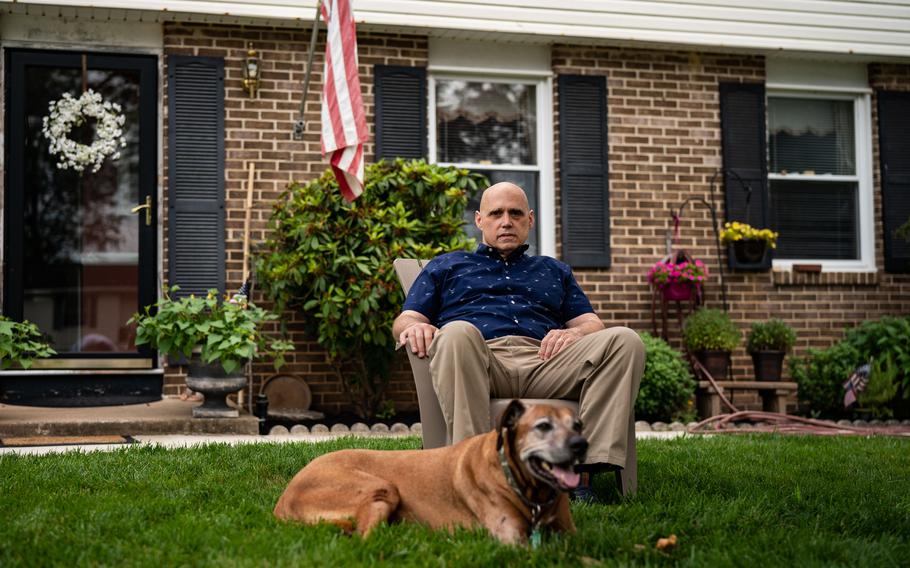 Franz Gayl, a civilian who works at the Pentagon, is facing a counterintelligence investigation after writing pieces attacking U.S. foreign policy for a Chinese state tabloid. (Salwan Georges/The Washington Post)

The headline hardly stood out on the website of the hyper-nationalistic Chinese newspaper.

“Why US will lose a war with China over Taiwan island,” announced the April 27 op-ed in the Global Times, which also referred to Taiwan’s democratically elected leaders as “renegade secessionists” and called U.S. Congress interest “corrupt.”

What was unusual about the article was its author.

Franz Gayl isn’t just an American. He is a celebrated whistleblower — whose conduct was praised by then-Sen. Joe Biden, D-Del. — and a retired Marine major working at the Pentagon.

“I knew it would get everybody’s attention,” Gayl told The Washington Post. “And man, did it.”

Some commenters accused him of treason for the piece, which comes at a time of elevated tensions between Washington and Beijing, after it was picked up by a conservative publication. But Gayl shrugged off the criticism.

He even penned another piece for the Global Times, which the Trump administration had designated a Chinese government entity, a month later.

Then the U.S. government launched a counterintelligence investigation, suspending the 64-year-old’s security clearances while it seeks to determine whether Gayl has been compromised.

The Marine Corps confirmed an “ongoing investigation” regarding Gayl but would not provide details. Representatives of both the Marines and the Pentagon say Gayl’s op-eds were not submitted for required prepublication review and are not representative of U.S. policy.

After 18 years, Gayl faces an early exit from the civil service.

He has no regrets.

“If we don’t talk about this now, we are going to sleepwalk into this conflict,” Gayl said of a potential war between the United States and China. “I’m glad that I did it . . . but it was probably a step too far with the Marine Corps.”

In May 2007, amid a U.S. troop surge in Iraq, Wired magazine published a piece titled “Military Dragged Feet on Bomb-Proof Vehicles.” The article unleashed a whirlwind of controversy that led to congressional hearings and, ultimately, hundreds of millions of dollars for lifesaving equipment.

The exposé didn’t mention Gayl, but he had leaked a key document to Wired. As a science adviser to the Marine Corps, he had recently returned from a stint in Iraq, where he had seen signs the military had delayed the rollout of much-needed armored vehicles known as MRAPs. Gayl briefed the staffs of Sens. Biden and Kit Bond, R-Mo., who both later praised him as a “hero.”

Then he went public.

The incident landed Gayl in hot water. But the outcome convinced him that the headlines — and headache — had been worth it.

Fourteen years later, he again turned to the media in what he said is a similar bid to protect American soldiers.

“Any reasonable man or woman would say that it’s outrageous for a civil servant working inside the bowels of the Pentagon to write on a communist news site, right?” Gayl said. “Under any other circumstances, I’d say yeah. But I needed to get this thing elevated.”

Gayl said he gets his intensity from his father. Franz Joseph Ferdinand Gayl grew up in Germany and, despite being part-Jewish, became a Luftwaffe paratrooper.

“He could be the first one to go overboard. And with this Global Times thing, I guess I went overboard,” he said. Franz Gayl, photographed at his home in Virginia, is planning to retire after spending decades working for the U.S. government. (Salwan Georges/The Washington Post)

When Gayl was a child, his father — who spent time in prisoner-of-war camps in the United States before becoming an architect in Minnesota — moved the family to an uninhabited island. There, he taught Gayl to drive a World War II-era amphibious landing craft.

After dropping out of high school, Gayl joined the Marines. “I owe everything to the Marine Corps,” he said.

After 22 years of active duty, he retired but stayed on as an adviser.

He was cleared by the U.S. military to interview a Chinese diplomat for a graduate school research project, he said, and spoke to a Chinese consular official named Jia Xiudong.

Gayl incorporated the interview into his research. It advocated that, among other steps, Washington recognize Chinese sovereignty over self-governing Taiwan.

The project won an award but also raised alarms. The Naval Criminal Investigative Service conducted a counterintelligence investigation that it later told Washington Monthly was “resolved in Gayl’s favor.”

NCIS began looking into him again in 2008 over concerns Gayl had divulged classified documents during the MRAP affair.

At one point, he was booted from a room at the Pentagon where confidential materials are handled and stripped of his security clearance. He was accused of inserting a USB device into a computer containing classified information and then failing to turn over the device to a supervisor.

Gayl fought the attempt to fire him, saying he was the subject of reprisals over the MRAP affair. In 2011, the Navy reinstated his clearance.

As tensions mounted last year between the United States and China, including sparring over the origin of the coronavirus pandemic, Gayl revisited his project.

He adapted it into an article published in January, with his superiors’ permission, in the Marine Corps Gazette. He also sent copies to officials including Trump, Biden and former secretary of state Henry Kissinger, who thanked Gayl in an email for his “thoughtful perspectives.”

“But what I really wanted was a big splash,” Gayl said.

So he began submitting similar op-eds to newspapers including The Washington Post. When none would run the piece, Gayl decided to go with an outlet he felt certain would want his op-ed. Its publication would come at a price.

In mid April, Gayl emailed the Global Times with a plea to publish his article.

“It will be widely read throughout D.C. because I am a federal civil servant in the Pentagon,” he wrote. “I will probably get in some trouble for reaching out to an authoritative Chinese publication to raise issues that counter bad US policy. But the imminent war will be a tragedy we will all regret.”

The op-ed was published 12 days later.

“They actually toned it down, if you can imagine that,” Gayl said.

Gayl showed The Post an email exchange in which he rejected the Global Times’ offer of around 1,000 yuan, or roughly $150, for the op-ed. He said he has never taken money from the newspaper.

Beijing has said it hopes to see more Edgar Snows — a reference to the American writer who provided insight into Chinese Communist Party leader Mao Zedong but has also been described as China’s “perfect mouthpiece.”

Gayl claims he didn’t receive any blowback over the first op-ed, but that changed after he wrote another claiming “China-averse special interests” in the United States were “othering” or trying to “dehumanize” the Chinese in preparation for a war.

On June 1, Gayl was at his desk in the Pentagon when he was once more summoned to the security office and, like a decade ago, stripped of his clearance. Gayl was given a letter that said he was the subject of a counterintelligence investigation but did not provide more details. One superior hinted the issue was his op-eds, Gayl recalled.

The NCIS said it does not comment on or confirm details relating to ongoing investigations.

“I knew the things I was saying weren’t going to get approval, but ... we are running out of time as a country,” Gayl said.

Having gone through one counterintelligence investigation, Gayl said he didn’t want to put his family through it again. Instead, he plans to retire. Leaving means his security clearance won’t be returned, ruling him out of many jobs in Washington.

“But that’s OK,” he said. “I’m ready to do something different.”

Katerina Ang contributed to this report.