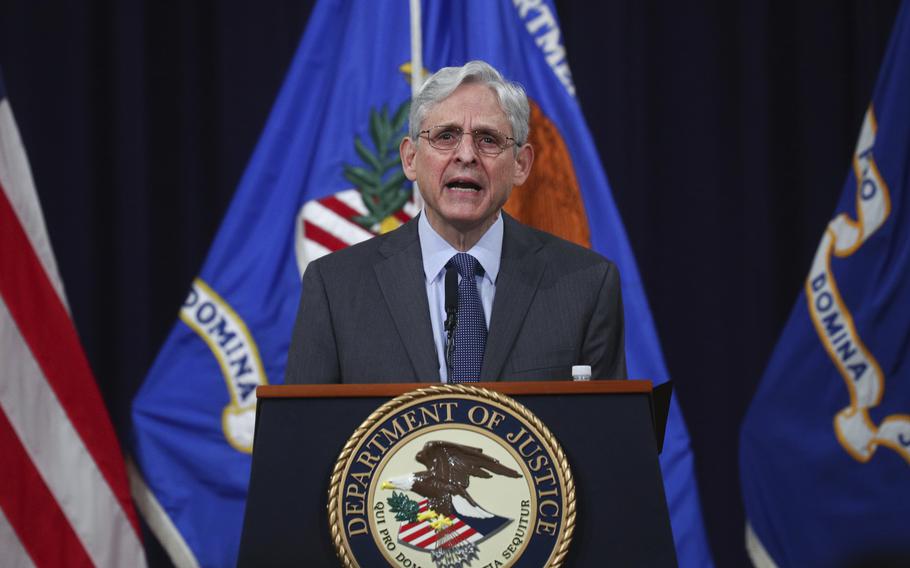 In an expansive speech that invoked the nation’s long and, at times, faltering progress toward ensuring every American’s right to vote, Garland likened the fight against efforts to curtail ballot access to past campaigns enshrining voting rights for Black Americans in the Constitution and the seminal Voting Rights Act of 1965.

Garland said the additional trial attorneys, which he plans to hire over the coming 30 days, will scrutinize new laws and existing practices across the nation for potential discrimination against Americans of color, including in new measures GOP state lawmakers are pushing. They will enforce provisions of the Voting Rights Act by challenging such laws or practices in court — and prosecute anyone found to intimidate or threaten violence against election officials.

The expanded unit will also monitor the growing number of post-election ballot reviews being called for around the country by supporters of former president Donald Trump in search of signs of violations of federal laws, Garland said, and will watch over upcoming redistricting efforts to call out discriminatory practices.

“To meet the challenge of the current moment, we must rededicate the resources of the Department of Justice to a critical part of its original mission: Enforcing federal law to protect the franchise of all eligible voters,” Garland said in his address to department employees.

He added: “Where we see violations, we will not hesitate to act.”

His remarks come as the Biden administration faces growing pressure from civil rights groups and state Democrats to more forcefully challenge Republican-backed voting restrictions and attempts by Trump supporters to revisit the results of the 2020 election.

Republicans have justified their push for new voting laws by citing a need to make elections more secure, despite the fact that there is no evidence that widespread fraud marred last year’s election.

Garland’s announcement represents one of the most sweeping commitments to voting rights in recent U.S. history - one made necessary, he said, by the raft of laws being considered in dozens of state legislatures.

The plan is also needed, he said, because of the landmark 2013 Supreme Court case Shelby County v. Holder, which struck down key provisions of the Voting Rights Act that required some jurisdictions to seek Justice Department approval before changing voting practices and laws.

Although Congress is considering a new measure, the John Lewis Voting Rights Act, which would replace the pre-clearance provisions struck down in Shelby, “we will not wait for that legislation to act,” he said.

Garland said the Justice Department will do what it did before the 1965 legislation passed: It will scrutinize laws and practices county by county and state by state to ensure all voters have equal access to the franchise.

One focus of the department’s scrutiny, he added, will be to examine why Black voters in some U.S. cities often stand in longer lines than their White counterparts.

He quoted the late civil rights icon and Georgia congressman John Lewis, after whom the pending voting legislation is named: “Democracy is not a state. It is an act, and each generation must do its part.”

He pledged to dedicate a level of fire power to voting rights not seen in decades. In addition to the expanded team of trial attorneys —- which will grow from about 12 to two dozen — the department’s national security and criminal divisions, 93 U.S. attorneys as well as the FBI will be part of the effort to “investigate and promptly prosecute any violations of federal law,” he said.

Garland also took aim at the efforts to review ballots cast in the 2020 election, such as the one underway in Arizona’s Maricopa County, saying they are premised on false claims about fraud that have been debunked by the current and previous administrations.

“Some jurisdictions, based on disinformation, have utilized abnormal post-election audit methodologies that may put the integrity of the voting process at risk and undermine public confidence in our democracy,” he said.

The Arizona audit was rebuked Friday by Rep. Liz Cheney, R-Wyo., who was ousted by House Republicans from her leadership position after she criticized Trump’s attacks on the 2020 election.

“What is happening in Maricopa County is not an ‘audit,’“ she wrote in a tweet. “It is an effort to subvert democracy.”

The Justice Department was already closely monitoring the Arizona audit, with a top official in the civil rights division, Pamela S. Karlan, writing to the state Senate president in a letter last month that the recount could be in violation of federal law by leaving ballots at “risk of damage or loss.” She also raised questions about the auditor’s stated plans to “identify voter registrations that did not make sense” and interview voters via phone and “physical canvassing,” which raised the risk of voter intimidation.

Arizona Republicans have said they have deferred the plan to contact voters.

President Joe Biden has faced growing pressure from within his party to fight back harder against the ballot reviews and the new voting restrictions imposed by Republican-led state legislatures.

Many Democrats see federal legislation as the most effective response to the voting fights playing out in multiple states. But a House-passed bill that would directly challenge some GOP efforts by establishing national standards for early voting and vote-by-mail, among other provisions, lacks the support in the Senate to succeed.

White House and Justice Department officials, keenly aware of the near-impossible hurdles they face on Capitol Hill, see the executive branch as perhaps their primary tool for taking on the Republican voting laws.

The more aggressive posture by the administration comes amid an increasingly volatile atmosphere for election workers. In Michigan last year, a crowd of protesters assembled on the lawn of Secretary of State Jocelyn Benson, chanting into megaphones as she and her 4-year-old son were decorating their home for Christmas. Georgia Secretary of State Brad Raffensperger and his wife have received death threats. And the attacks on local election administrators have continued this year as the drumbeat for post-election reviews has grown.

In his address, Garland said protecting election workers is a key piece of the new effort. “We have not been blind to the dramatic increase in menacing and violent threats against all manner of state and local election workers, ranging from the highest administrators to volunteer poll workers,” he said. “Such threats undermine our electoral process and violate a myriad of federal laws.”

While Republicans were largely silent about Garland’s announcement, civil rights groups hailed it - even as they demanded more in the form of voting legislation from Congress.

“The uphill battle to protect our most sacred and fundamental right, the right to vote, is far from over, NAACP President Derrick Johnson said in a statement. “Today’s announcement from the Attorney General speaks to the level of urgency that is needed to protect our democracy and ensure that our voices are heard. It is a race against time, and against those working to suppress our votes.”

Some Democrats said the administration’s intense and increasingly drawn-out focus on infrastructure has come at the expense of a more aggressive push on voting rights. White House officials strongly rejected this characterization, asserting that they are tackling multiple issues at once.

The Washington Post’s Matt Zapotosky and David Nakamura contributed to this report.