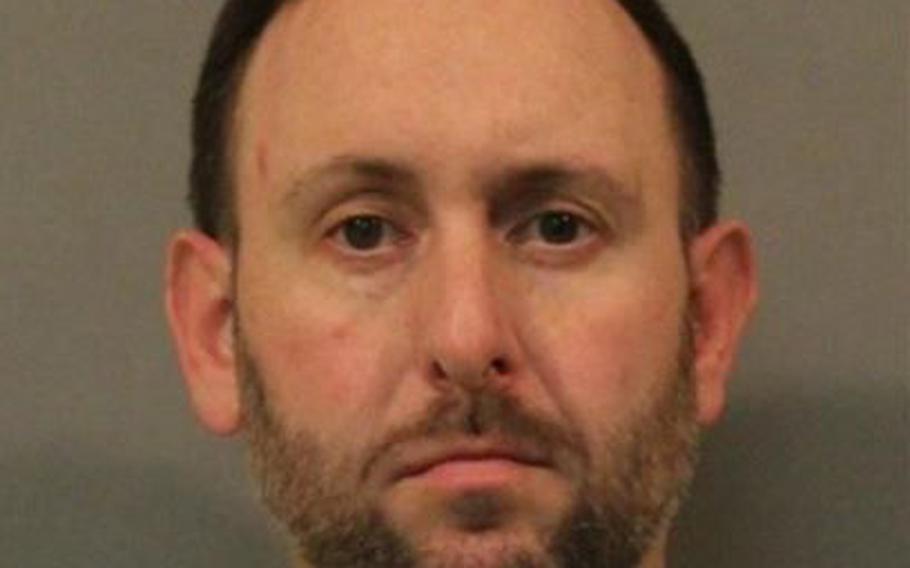 Timothy R. Thomas, a police officer with the Department of Veterans affairs, is charged with murdering Navy veteran Nicholas Lile, 42, on Jan. 3 while drinking with their spouses and friends in the basement of Liles’ Lowell, Ind. home. (Lake County Sheriff)

Thomas, 40, of Highland, is charged with murdering Navy corpsman Nicholas Lile, 42, on Jan. 3 while drinking with Lile; Lile’s wife, Jessika Lile; and the couple’s friend Angela Gauler in the basement of the Liles’ Lowell-area home.

Gauler and Jessika Lile invited Thomas to the home because Gauler had been casually dating Thomas, records state.

Nicholas Lile died from a gunshot wound to the chest, records show.

Thomas claims he shot Lile in self-defense, after Lile “grabbed him by the throat, threw him down, choked him, punched him, lunged at him and threatened to kill him,” according to court records.

Lile’s wife, Jessika Lile, testified in April she did not see a confrontation between the two men before hearing the fatal gunshot.

Gauler initially told police she saw a confrontation but later recanted. She testified at Thomas’ bail hearings in April she was too intoxicated to recall what happened before Lile was shot dead.

Thomas has been indefinitely suspended from his job at VA Northern Indiana Health Care System pending the disposition of his criminal case, a spokeswoman said.

The state provided copies of Facebook and text messages between Jessika Lile and Gauler, but the defense wanted phone records to make sure that all available information is handed over, Murphy said.

Lake County Deputy Prosecutor Jennie Bell said the defense’s request was overly broad and amounted to “a fishing expedition.” Allowing Thomas’ attorneys to review all of the women’s call records from January until present day would violate their privacy, she said.

“This is a grieving window,” Bell said.

Vasquez granted the defense’s request to subpoena the records after Murphy agreed to limit the time frame from Jan. 2 to Jan. 29, which was the day Gauler gave a second statement to police recanting her previous statement about witnessing a confrontation.

Bell said the state wanted Thomas’ employment records because he repeatedly told responding officers he was a police officer and his attorneys “opened the door” by repeatedly referring to him as “Officer Thomas” during bail hearings.

The lead detective in the case testified he thought Thomas’ repeated statements about his employment were suspicious, Bell said.

Vasquez said he could imagine a scenario where Thomas might testify on his own behalf and claim he has never been disciplined or had a complaint filed against him. Without the requested information, prosecutors would have no way of rebutting such statements, he said.

Indiana law allows for a broad interpretation of discovery rules, he said.

“Again, I emphasize what may be discoverable does not necessarily mean it’s admissible at trial,” Vasquez said.