WASHINGTON — The Biden administration on Thursday told federal agencies that more employees can return to their offices as the threat of the coronavirus pandemic ebbs, but it also laid out a permanent work-from-home expansion that will drastically alter the federal government’s workplace culture.

Federal agencies no longer have to limit the number of staffers allowed in their offices to 25% occupancy, the administration said in the first major announcement on pandemic staffing it has issued since January.

But the 20-page memo to federal agencies also maintains what started as an experiment in March 2020 to contend with the public health crisis — for the immediate future and potentially the long term.

As they make plans for a post-pandemic workplace, agencies across the government will be allowed to offer employees flexible schedules and remote work, depending on their needs, according to the guidance from the acting heads of the Office of Management and Budget, the Office of Personnel Management and the General Services Administration.

“Evaluation of an employee’s performance should be based on factors such as accountability for results or quality of the work, and should not be affected by whether an employee is working in the office, teleworking, based remotely, or working a flexible work schedule,” they wrote.

The move shows how the thinking about the workplace has shifted inside the federal bureaucracy, which for decades has operated under a top-down, risk-averse model requiring employees to be in their seats to show they were working. That approach has hampered efforts to attract new employees — especially the young talent the civil service lacks, some officials said.

“It is a positive development for the government to make the promotion of flexibility and remote work a core principle in its plans for the post-pandemic world of work,” Adam Ozimek, chief economist at Upwork, an online site for hiring freelancers and a leading voice on remote work, said in an email. “This isn’t just about making work better for people, but increasing access to talent and spreading opportunity across the U.S.”

The announcement was sharply criticized by some Republicans in Congress who have complained that a slow return of federal employees to the workplace by the Biden administration has led to diminished services for the public.

“With continued telework flexibility, government workers won’t be able access constituents’ VA medical records or IRS financial records while working from home because those need to be secured in an office,” Rep. Michael Waltz, R-Fla., said in a statement. “This is an enormous problem as constituents lack access to key government services and are seeing in real time their taxes wasted.”

Waltz is one of several Republican lawmakers who have asked the Biden administration to explain why federal offices in states with low transmission rates remain closed.

Jason Miller, OMB deputy director for management, said in a statement that the new guidance “will facilitate planning for an increased return of Federal employees to physical workplaces, and it clearly reinforces that the safety of the Federal workforce remains a top priority.”

“The President has established two clear goals that serve as the foundation for today’s guidance: that this Administration will empower, rebuild, and energize the Federal workforce and that the U.S. government must deliver results for all Americans,” he added.

Thursday’s memo envisions expanded support for employees who request flexible work schedules. It calls for new training for managers on “fair and equitable performance management” for staffers working hybrid schedules that combine in-office and at-home work. It emphasizes expanded opportunities for employees who live in one part of the country to report on a permanent basis to managers multiple states away - an arrangement that was rare before the pandemic.

“Employees who have been teleworking during the pandemic generally will remain eligible for telework, at least on a situational basis,” the memo stated.

The new policy is likely to be cheered by many federal employees, 59% of whom were teleworking at the peak of remote work during the pandemic.

Federal workers gave the flexibility high marks in a workforce survey, and many managers concluded that productivity did not suffer.

“This pandemic has proven that telework works,” said Tony Reardon, president of the National Treasury Employees Union, which represents 150,000 employees in 34 departments. “Agencies in our view can’t and shouldn’t try to put that toothpaste back in the tube.”

He said the questions of which employees are eligible to work from home and for how many days a week would be the subject of collective bargaining, along with safety-related issues such as access to testing, cleaning of workspaces, accommodations for employees at high risk of health problems and notice to employees if a nearby co-worker has tested positive for the coronavirus.

Formal negotiations over those and other issues could be lengthy, Reardon said - but could go quickly if agencies commit to working them out with unions informally.

Much of the government has worked remotely since March 2020, with entire departments still out of the office in some cases. However, hundreds of thousands of employees whose jobs require them to be on-site —- such as meat inspectors and airport security screeners — never worked from home.

Some offices have selectively called employees back in recent months, but many senior leaders in the administration still have not moved to Washington.

Thursday’s memo was the first step to returning to a post-pandemic work environment.

Changes will not be immediate, however. Before increasing building occupancy or changing employees’ telework status, agencies have to come up with plans that satisfy any collective-bargaining obligations, update their coronavirus safety protocols and give employees “ample notice” —- generally at least 30 days - to adjust their schedules. Agencies are required to complete their return-to-work plans by July 19.

Each department, down to the smallest unit, has the option to determine who will come back to the office and who will continue to work from home. To ensure safe workplaces and enough physical distance between employees when there are unvaccinated people in the office, an agency can establish occupancy limits, the guidance said.

“We’re happy to see that the administration is not rushing or imposing any kind of uniform schedule but rather allowing agencies time to work with us for a safe re-entry that incorporates the lessons learned about both the advantages and disadvantages of telework,” Everett Kelley, president of the American Federation of Government Employees, with 750,000 members the largest union representing federal employees, said in a statement.

The White House appears to be striking a balance between showing the public the administration has turned a corner on the pandemic, with a government ready to return to normal operations, and giving federal workers and the unions that represent them — key constituencies for President Joe Biden —- flexibility to make child-care arrangements and move back slowly.

The incremental approach may also reflect a wariness that Biden’s goal of having 70% of the country vaccinated by July may be optimistic, particularly in red states where many federal offices are located.

The new policy comes a day after the administration told agencies they should not require their employees to be vaccinated against the coronavirus to return to the office or require them to disclose whether they are vaccinated.

The Equal Employment Opportunity Commission put out its own guidance this month saying that companies are permitted to require vaccinations for employees who return to the office. But many private companies have held back, wary of the fraught politics surrounding vaccine mandates and the untested legal issues involving vaccines cleared under the Food and Drug Administration’s emergency authority.

Remote work had been slow to take hold in the government, even as private companies allowed their workers flexibility to work where they wanted — a resistance that hardened during the Trump administration.

But the Biden administration, which is beginning to hire thousands of new employees at agencies depleted in the Trump era, has been more open to the idea that workers do not need to be physically present in the office to be productive.

At the Agriculture Department, Secretary Tom Vilsack told employees soon after he took office that he would work to restore a generous telework policy his predecessor, Sonny Perdue, sharply curtailed.

In recent weeks, congressional Republicans have pressured the administration to return large swaths of the workforce to the office, citing increased vaccinations, declining coronavirus cases and a need to better serve the public.

Of particular concern are partial in-person staffing levels at the National Personnel Records Center in St. Louis, an arm of the National Archives that provides veterans with vital paper records they need to obtain benefits, access to health care and burials at veterans cemeteries. Pandemic staff absences have created a backlog of close to half a million service requests that must be processed by hand.

A spokesman for the National Archives said last month that the records center was following federal guidelines on in-person work and had already recalled more than half its staff to the office. 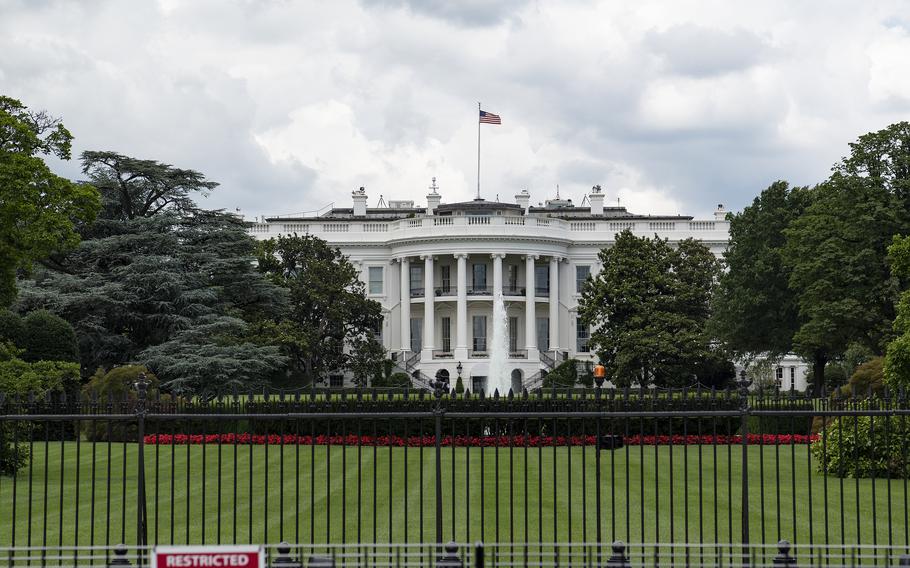 Buy Photo
The White House as seen from the south lawn on May 24, 2018 (Carlos Bongioanni/Stars and Stripes)