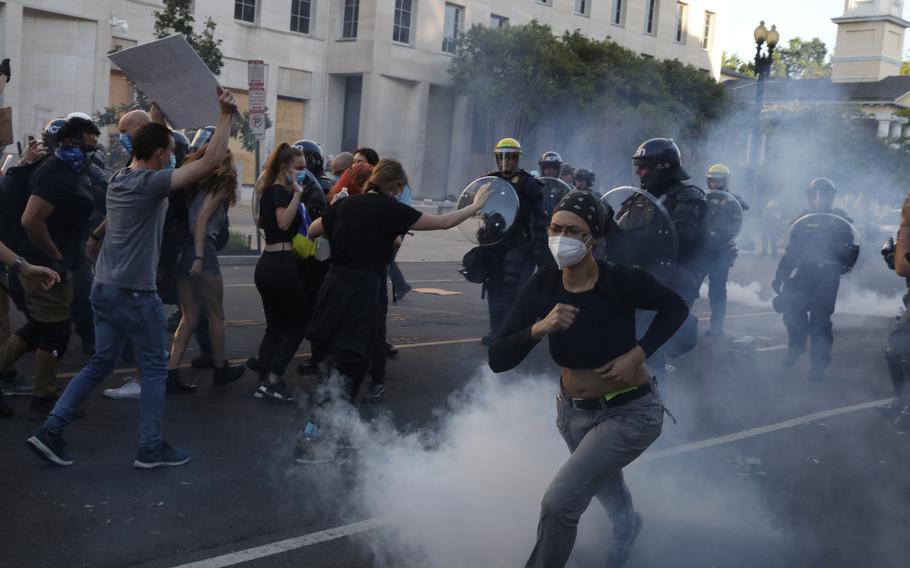 WASHINGTON — When the U.S. Park Police led law enforcement into a crowd of mostly peaceful protesters outside Lafayette Square on June 1, 2020, including officers equipped with chemical irritants and officers on horseback, they did so as part of a plan made days earlier to build a fence around the park to protect officers, not to facilitate the visit minutes later by President Donald Trump to a nearby church, a new inspector general’s report concluded Wednesday.

The report also found that D.C. police officers fired tear gas at protesters as they moved away from the park toward 17th Street, and that Bureau of Prison officials fired pepper spray munitions, both contrary to what Park Police commanders had instructed. Investigators also found that the audio warnings issued to the Park Police before the operation were not widely heard by the crowd and mostly ineffective.

The Interior Department’s inspector general conducted the investigation looking largely at the role of the Park Police but not the Secret Service, which is under the Department of Homeland Security. Interior officials said they may not have heard all of the discussions that went on about the operation within the Secret Service or the White House, but that those discussions did not affect how and when the Park Police acted. The investigators did not interview Secret Service or White House personnel.

As protests sprang up around Lafayette Square after the May 25, 2020, killing of George Floyd by a Minneapolis police officer, Park Police began getting pelted with water bottles, rocks and fireworks which led to 49 officer injuries through May 31. At 6:32 p.m. on June 1, Park Police officers joined by Arlington County police, Bureau of Prisons officers and Secret Service officers began clearing H Street on the north side of the park.

Twelve minutes later, Trump began speaking in the White House Rose Garden. “What happened last night was a total disgrace,” the president said. “As we speak, I am dispatching thousands and thousands of heavily armed soldiers, military personnel and law enforcement officers to stop the rioting, looting, vandalism, assaults and the wanton destruction of property. We are putting everybody on warning, our 7 o’clock curfew will be strictly enforced.”

The thumping of munitions and wailing of sirens could be heard in the background as Trump spoke.

At 7:02 p.m., Trump began walking from the White House to the park, and at 7:06 p.m. he stood in front of St. John’s Episcopal Church on H Street and held up a Bible for a photo opportunity.

Interior officials said they found no evidence that the Park Police cleared the square for the photo opportunity.

“If we had found that type of evidence,” Interior Inspector General Mark Greenblatt said, “we would not hesitate in presenting that, and saying that was influencing the Park Police’s decision-making to clear the park. Just so you know, if we had found that, if we had seen that type of evidence, we would absolutely have reported that, without a doubt.”

After a night of violence in and around the park on May 31, Mayor Muriel Bowser had announced a 7 p.m. curfew, and many wondered why the Park Police didn’t wait for the curfew before taking on the protesters. But, according to the report, the Park Police incident commander told investigators, “We were not enforcing the mayor’s curfew. We’re a federal entity. We don’t work directly for the mayor.”

Instead, the operation arose out of a meeting on May 30, two days earlier, in which the Park Police and Secret Service jointly decided “to establish a more secure perimeter around Lafayette Park” in response to the protests. A fencing contractor told the investigators that the Secret Service contacted her on May 30 to discuss erecting the fence, and that it agreed to do so if police created a safe area for the builders.

The inspector general’s report does not address whether the police use of force was appropriate but does say the Park Police were permitted to clear the area immediately around the park. The Park Police did not intend to make arrests or use chemical munitions, the report said.

The Metropolitan Police Department acknowledged Tuesday that it did use tear gas as the protesters moved toward them, though they were not involved in the initial push away from the park. D.C. police spokeswoman Kristen Metzger issued a statement which said:

“On June 1, 2020, a number of individuals in the area of 17th and H Streets NW began throwing multiple objects at Metropolitan Police Department (MPD) officers. This included an incendiary device attack that seriously burned and scarred the limb of an MPD officer. In response to these assaultive actions, MPD deployed crowd control tools that included tear gas in an effort to stop the riotous behavior and protect both officers and others in the area. As was stated previously, MPD was not involved in the movement of the President from Lafayette Square to St. John’s church on June 1, 2020.”