The largely classified initiatives are based on recommendations by the Pentagon’s China Task Force, the official said during a teleconference. President Joe Biden announced the task force in February to assess the Defense Department’s China-related programs, policies and processes and identify top priorities and recommendations for the Pentagon.

“This directive from the secretary is ultimately about getting the department’s house in order and ensuring that the department lives up to the stated prioritization of China as the number one pacing challenge,” said the official, who spoke on the condition of anonymity.

The task force consisted of 23 members from across the Defense Department, including representatives from each service branch, several joint-staff combatant commands, the intelligence community and Austin’s office, the official said.

The group “reviewed thousands of pages of documents, strategies and analysis,” interviewed “hundreds of current and former DOD officials,” and consulted Congress, the National Security Council and the State Department during their analysis, the official said.

“We decided early on that we didn’t want to produce a set of aspirational recommendations that would just sit on a shelf, so our team sought to understand the critical debates inside the department and what would be required to bring greater focus, unity of effort and coordination on the China challenge,” the official said.

The U.S. first identified China as a “strategic competitor” in the 2018 National Defense Strategy because of the nation’s rapid military expansion and modernization, “influence operations, and predatory economics to coerce neighboring countries to reorder the Indo-Pacific region to their advantage.”

While the 2018 strategy “was critically important in highlighting the need to prioritize China,” the task force found “a ‘say-do gap’ between the stated prioritization of China and what we saw in a number of areas related to attention, resources and processes,” the official said. “The directive today is really about ensuring that the department lives up to that prioritization.”

The Biden administration is drafting a new national defense strategy, which will be shaped in part by the task force’s findings, the official said. It is expected to remain critical of China.

The task force gave Austin their findings in April. He used them to issue the Wednesday directive with set “deadlines as soon as 30, 45, 60 days and beyond for components to come back with proposed courses of action and plans for implementation,” the official said.

The findings and most of Austin’s initiatives remain classified, but the Pentagon will “provide updates to Congress and publicly when possible,” the official said.

The official said the initiatives focus on major areas including “how the department approaches deterrence, operational concepts, emerging capabilities, future force posture, technology [and the] civilian and military workforce.”

“For instance, to ensure that the department has the people that we need to compete effectively, the secretary tasked the undersecretary for personnel and readiness with updating professional military education and civilian professional development to align the department with the prioritization of China,” the official said.

Also as part of the initiatives, Austin will “personally be reviewing efforts to accelerate the joint-warfighting concept through joint experimentation and prototyping,” the official said.

“The internal directive is written with clearly stated objectives [and] defined tasks to specific components with deadlines for implementation and mechanisms for oversight and accountability,” the official said. “To the extent possible we design these efforts to run through the lifeblood of the department, leveraging existing institutions and only recommending new processes were necessary.”

The task force was given four months to complete the project and will stand down now that their findings have been presented, according to the Pentagon. 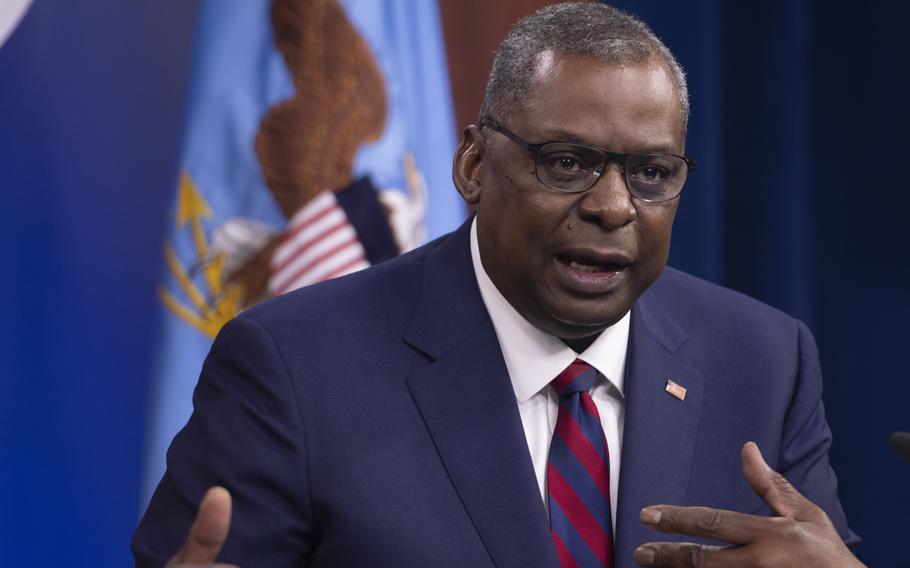 Secretary of Defense Lloyd Austin provides remarks during a virtual meeting with the leadership of 26 different military and veteran service organizations the Pentagon, May 5, 2021 . (Chad McNeeley/Department of Defense)