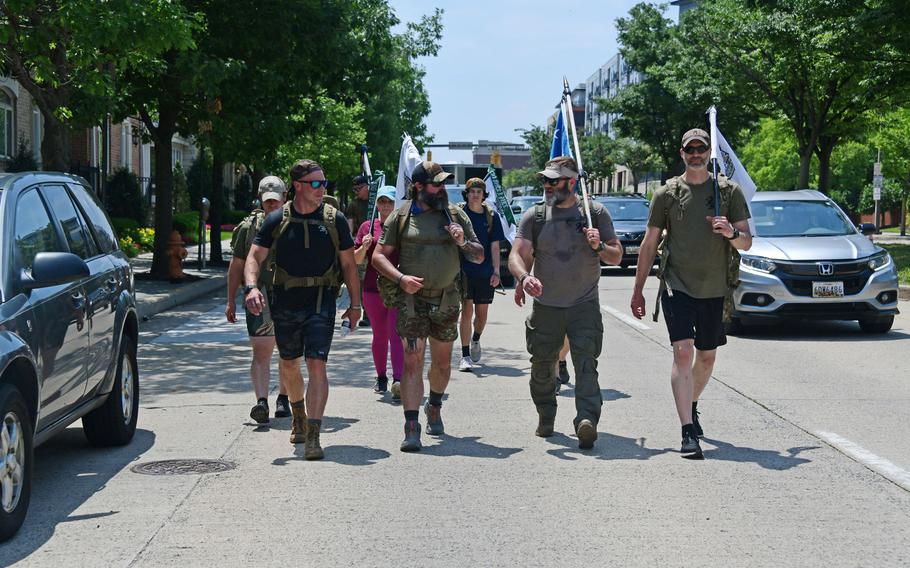 A group of active and retired military and active duty DEA Washington Field Division members walk on Key Highway to Federal Hill Park on Monday, June 7, 2021. They are raising money and awareness for APK Charities through the Ruck 2 Remember walk. (Kim Hairston, The Baltimore Sun/TNS)

BALTIMORE (Tribune News Service) — The small group bounded up the steep incline of Federal Hill Park on Monday afternoon with the names of their fallen comrades attached to flags flapping in the breeze.

Quickly catching their breath, the group participating in the second annual “Ruck 2 Remember” took in the sweeping views of Baltimore City’s skyline and Inner Harbor and exhaled a sigh of relief. There were only about 60 miles left in their weeklong journey of 380 collective miles by a core group of five marchers.

“This allows us to come together and memorialize our fallen and to honor the families,” said Chief Warrant Officer Will Reese, an operations officer with the U.S. Army Special Operations Command.

Reese sits on the board of APK Charities, which works to honor Capt. Andrew Pedersen-Keel, who was killed in Afghanistan in 2013 while serving as the commander of his special forces detachment. He was 28.

In 2019, Reese was brainstorming events beyond a 5K walk and came up with the idea of R2R: Everyone would wear a ruck — a 36-pound military backpack — and the route would retrace Keel’s life, beginning in Avon, Connecticut, where Keel was raised, and ending at Arlington National Cemetery in Virginia. 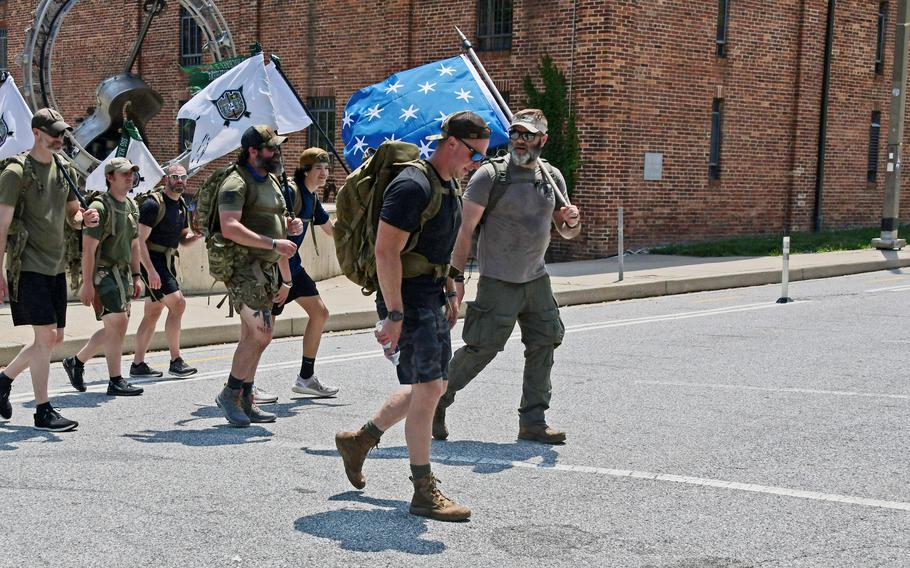 In addition to Keel, 36 other veterans killed in action are specifically being honored during this year’s walk. Among them is University of Maryland alumnus, Drug Enforcement Administration Special Agent Forrest N. Leamon, who died in an Afghanistan helicopter crash in 2009 at the age of 37.

“It’s a way to give back, reminisce about the old days and share stories,” Reese said. “It’s also all about the families. They may have lost one son but then gained 12 more with the other living team members and veterans.”

Not even the hot conditions — Monday’s high temperature in Baltimore was 94 degrees with a heat index of 99 — or the aggressive cicadas could slow the group of five on this year’s trek.

Over the past week, during which they averaged a collective 60 miles a day among them, they have toured the 9/11 memorial in New York City and visited the Statue of Liberty with a boat escort by the New York City Police Department. In Philadelphia they scaled the famous “Rocky” art museum steps and saw the Liberty Bell.

The group reached the Baltimore area Sunday night, stopping in Bel Air for a few hours of sleep before another pit stop in the city before then heading later in the day to Washington, D.C., and to Arlington on Tuesday. Local Drug Enforcement Administration agents and law enforcement officers have joined the group in nearly every city, with Baltimore being no different.

While only five people — including Reese’s 13-year-old son, Adrian — are in the core march, Reese said more than 100 people are participating in the ruck virtually across 11 states and five countries. Collectively, more than $12,000 has been raised for APK Charities.

Ryan Oldenburg, a retired Army special forces medic, said participating in the ruck with two of his closest friends and being able to share stories has given him a sense of closure after struggling to find himself following his military career.

“We can either die young and be a hero or live forever and tell their stories; there is no in between,” he said. “So, being able to get out and walk and tell those stories and educate people is helping me find my purpose.”

The Raeford, North Carolina, resident also said he’s been surprised by the amount of honking, thumbs-up and other support the group has received. It helped restore his faith in humanity, he added, saying the group has received nearly $200 for the charity from people stopping them to donate.

“We are getting to live the life that the friends on our flags can’t,” Oldenburg said. “And we have to make the most of that life.”