WASHINGTON - President Joe Biden signaled at a private meeting on Wednesday that he would be open to significant revisions on the size of his infrastructure package and how it would be paid for in order win Republican support, outlining a plan for about $1 trillion in new spending financed through tax changes that do not appear to raise the top corporate rate. 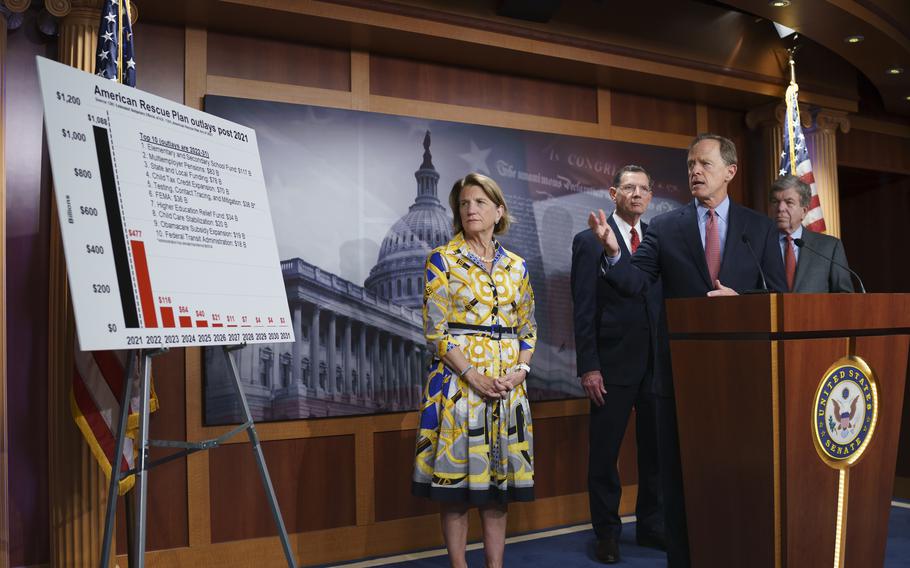 In this photo taken Thursday, May 27, 2021, Sen. Shelley Moore Capito, R-W.Va., the GOP's lead negotiator on a counteroffer to President Joe Biden's infrastructure plan, listens at left as she is joined at a news conference by, from left, Sen. John Barrasso, R-Wyo., Sen. Pat Toomey, R-Pa., chairman of the Senate Republican Conference, and Sen. Roy Blunt, R-Mo., at the Capitol in Washington. (J. Scott Applewhite/AP)

While Biden has not abandoned his call for these tax increases as part of his broader agenda, the moves are still a potential new concession in stalled talks over funding to improve the country's roads, bridges, pipes and ports.

At issue is the component of Biden's original infrastructure plan that would raise the corporate tax rate from 21% to 28%, unwinding the tax cuts the GOP adopted in 2017. Republicans have described this change as a political nonstarter as they seek to protect one of their accomplishments under former President Donald Trump.

In his meeting with the GOP's top negotiator, Sen. Shelley Moore Capito, R-W.Va., Biden raised the possibility he could take the proposed rate increase off the table in an attempt to broker a compromise, according to a person familiar with the talks who spoke on the condition of anonymity to describe them. The president still intends to seek the tax increase, the source said, meaning the White House could pursue the policy outside of the infrastructure debate - or in the case that bipartisan negotiations ultimately collapse.

In its place, Biden shifted the focus to a different part of his infrastructure proposal, which would amount to a new minimum corporate tax of 15%. This change would take aim at dozens of profitable U.S. corporations that pay little to nothing to the federal government annually, the source said. The White House also proposed stepping up enforcement on corporations and wealthy earners who rely on loopholes to lessen their tax burdens, according to the person familiar with the talks.

Biden's emphasis on these elements of his tax plan Wednesday marked an attempt by the White House to thread a delicate political needle. It aimed to preserve the president's 2020 campaign pledge not to raise taxes on Americans making under $400,000 a year, while steering clear of the "red line" set down by Republicans who see the 2017 tax cuts as their crowning economic achievement.

Both sides are set to meet again Friday, though Republican leaders are still deciding whether to put forward another counteroffer or to walk away from the negotiations entirely, according to a second source familiar with the talks.

Biden has long decried the fact that some of the country's most profitable enterprises pay little or nothing in corporate taxes. He stressed during his first-ever address to Congress last month that it is time to close "tax loopholes," urging lawmakers to "reform corporate taxes so they pay their fair share and help pay for the public investments their businesses will benefit from as well."

Asked Thursday about the president's position, White House press secretary Jen Psaki said Biden has "absolutely not" wavered in his belief that Congress should raise the corporate tax rate, adding it is a critical way to "pay for a range of the bold proposals that he has put forward."

"But he also took a look at these proposals, and . . . all of the tax proposals that he has put forward over time, to find a way where there should be pay-fors that based on their bottom lines, many of the Republican negotiators should be able to agree to," Psaki said.

The fate of any infrastructure deal is still unclear. Even with the potential concession on taxes, though, the White House's roughly $1 trillion plan still amounts to four times as much as Republicans have been willing to spend to improve the country's roads, bridges, pipes, ports and Internet connections. Entering the meeting, GOP leaders had endorsed roughly $257 billion in new spending, while maintaining an unwavering opposition to any tax hikes to finance infrastructure reform.

Instead, GOP leaders have called on the White House to repurpose unspent coronavirus relief aid now that the pandemic is improving. The White House has expressed only a limited appetite for reprogramming existing stimulus dollars, perhaps around $70 billion to $75 billion, according to one of the people familiar with the talks.

Capito did not respond to a request for comment. Politico first reported on the $1 trillion offer.

"We're still hoping we can come to an agreement on a fully paid for and significant infrastructure package," Senate Minority Leader Mitch McConnell, R, said during a stop in Kentucky on Thursday.

The latest exchange comes as top White House officials have started to signal that time is running out on striking a bipartisan deal. Biden has labored to secure Republican support on infrastructure after advancing his last economic policy priority, a $1.9 trillion coronavirus relief package, without GOP votes - though he has made clear that he is not willing to haggle indefinitely.

"There's definitely a deal to be had, and there's definitely optimism on both sides," Energy Secretary Jennifer Granholm told CNBC on Wednesday, stressing the administration's "honest and earnest desire" to agree to a plan with Republican negotiators. But she added: "There is a time limit on this. You're not going to play this back-and-forth for much longer. There is a limit."

Transportation Secretary Pete Buttigieg, meanwhile, previously said the Biden administration sees Monday as a critical date by which the White House expects to see progress in its talks. But Psaki appeared to steer clear of issuing any deadline on Thursday, saying at her briefing that the negotiations continue - and the White House is going to "keep our options open."

The White House's latest attempt at compromise left some Democrats uneasy. Sen. Ron Wyden, D-Ore., the chairman of the tax-focused Senate Finance Committee, stressed in a statement Thursday that there's support among voters for the kind of tax increases Biden initially sought.

"Inadequate corporate tax revenue could leave many critical investments the American people care about off the table," Wyden added, "and fall far short of the $2 trillion in corporate revenue called for in the president's proposals."

For Biden, the proposed improvements to the nation's infrastructure belong to a broader agenda that calls for significant increases in federal spending to address the country's economic needs. He has also put forward a roughly $1.9 trillion "families plan" that aims to improve federal safety net programs and a 2022 budget that includes major boosts to education and health agencies.

Central to that spending are proposed tax increases on corporations and wealthy Americans, one of Biden's signature pledges during the 2020 campaign. The president has also proposed additional rewrites of the tax code, including an attempt to raise taxes on investment income and revamp the international tax system. As Biden has issued these proposals, he has made clear that he wants to negotiate with Republicans on many aspects of the tax changes to try to draw bipartisan support.

Much as before, Biden could try to muscle the infrastructure plan through Congress using only Democratic votes. That path could be fraught with its own political challenges, though, given the wide array of opinions within the president's own party over what infrastructure reform should entail, and how to pay for it.

Some moderates, including Sen. Joe Manchin III, D-W.Va., also do not yet appear willing to abandon talks. Without their full support, Democrats would have no ability to advance infrastructure reform on their own in the Senate using a tactic known as reconciliation, which would require all 50 Democrats to vote in lockstep.

Corporations have paid a declining share in federal taxes since the 2017 GOP tax law dramatically slashed the corporate tax rate from 35% to 21%. Businesses are able to zero out their tax obligations because of expansive tax credits offered by the federal government for research and development and other expenses, leading some firms to repeatedly pay nothing in federal income taxes. Many corporations also use a tax break for executive stock options that allow them to reduce their income taxes, ITEP said, while tax breaks for renewable energy investments and other capital expenditures allow major write-offs.

Biden has been personally fixated on the trend and called for reversing it. But it is unclear whether Republicans would support the measure, and the president's comments during the private meeting on Wednesday could be an attempt to draw out their position.

"This might be the kind of policy that could pick off a few Republican senators. But, keep in mind, Republicans have not really voted for a tax hike since 1990. So anything is going to be a lift," said Brian Riedl, a former aide to Sen. Rob Portman, R-Ohio, now at the Manhattan Institute, a libertarian-leaning think tank.