Man pleads guilty to felony in Capitol riot; his recommended sentence could set bar for other cases 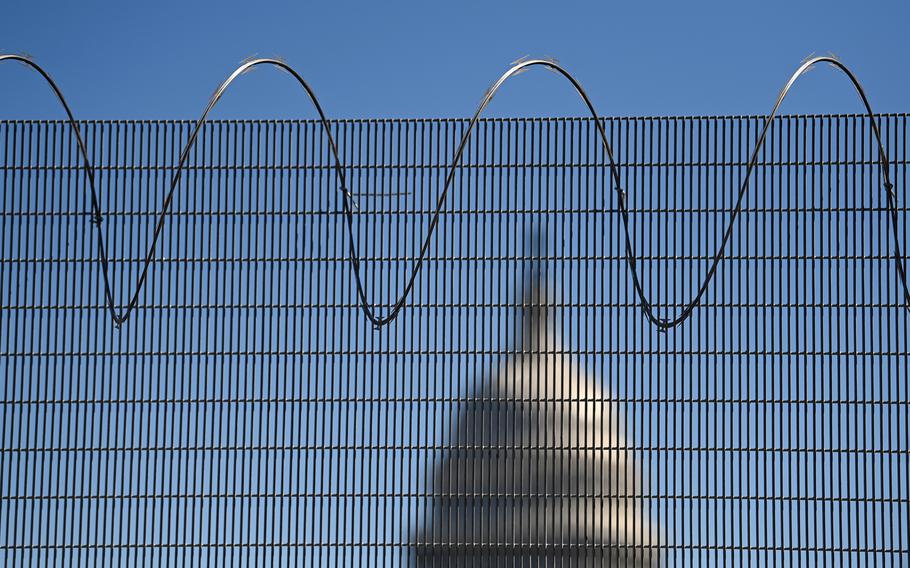 The guilty plea of a Tampa man could be a test case watched by other defendants deciding whether to accept pleas in the Jan. 6 Capitol attack. (Matt McClain/The Washington Post)

WASHINGTON — A Tampa man who carried a Trump flag into the well of the Senate on Jan. 6 pleaded guilty Wednesday to one felony count of storming the Capitol to obstruct Congress's certification of the 2020 presidential election.

Paul Allard Hodgkins, 38, did not enter a cooperation deal with prosecutors, and he is not accused of any other wrongdoing or involvement with extremist groups.

In admitting to the stiffest felony count charged by prosecutors against individuals not otherwise accused of conspiracy or violence in the Capitol riot, Hodgkins faces a prison sentence of 15 to 21 months under federal guidelines. His sentencing is poised to become a test case watched by other defendants deciding whether to accept pleas, several defense lawyers said.

"I have decided that I will accept this plea offer, and I will plead guilty to charge one," Hodgkins told U.S. District Judge Randolph Moss.

Hodgkins's attorney, Patrick Leduc, said he would seek a lower sentence at a sentencing hearing as soon as July 19, and he asked the judge to waive a $7,500 to $75,000 fine because his client also agreed to pay $2,000 in restitution for his share of riot damage to the Capitol.

Prosecutor Mona Sedky estimated damage to the Capitol at $1.5 million — the first time prosecutors have given a public cost estimate.

"There's no justification for January 6th. That's why he is standing up and entering a plea of guilty. He acknowledges what he did was wrong, and there's no excuses for it," Leduc said afterward.

"Paul is an Eagle Scout with no prior record, a working Joe who is a crane operator at a steel processing plant," who spent 15 minutes inside the Capitol, Leduc said.

Leduc added that he agreed with the government's standard for prosecuting disruptions of Congress, "and we hope they maintain it in the future."

Prosecutors agreed to drop four misdemeanor counts of trespassing and disorderly conduct in the restricted Capitol building and grounds. They also agreed to give Hodgkins credit for accepting responsibility, pleading in a timely manner and paying compensation.

Hodgkins is one of about 450 defendants federally charged in the riot, which authorities said contributed to five deaths, assaults on nearly 140 police officers and the evacuation of a joint session of Congress.

Nearly half the defendants face only misdemeanor charges likely to carry no prison time for first offenders. However, about 200 are charged with obstructing an official proceeding of Congress and are accused of intending to impede or interfere with Congress's confirmation of the electoral vote count. The charge carries a maximum 20-year prison term.

The threat of heavy jail time led to the first guilty plea stemming from Jan. 6 by Jon Ryan Schaffer, described in court documents as a founding member of the Oath Keepers. Schaffer agreed on April 16 to cooperate fully with prosecutors and is among at least 19 members of the right-wing group whose members or associates have been charged with planning for violence in the Capitol attack. Schaffer, 53, a guitarist and songwriter for the heavy metal band Iced Earth, could face roughly four years in prison, although if his cooperation is valuable to prosecutors in other cases, he might be able to shave a significant amount of time off that sentence.

Hodgkins was arrested Feb. 16 after FBI agents said they identified him in photos and video footage taken of rioters inside the U.S. Capitol building.

The FBI cited closed-circuit Senate video and other video published by the New Yorker magazine showing Hodgkins in the Senate chamber holding a red, white and blue "Trump 2020" flag and wearing a dark Trump T-shirt as he stood next to the Senate dais.

Hodgkins admitted that he "corruptly endeavored to influence, obstruct, or impede" Congress in a signed statement of offense that was read by prosecutors in court. Reading from the statement, Sedky said Hodgkins was holding the flag with other people while they "shout, cheer and say prayers" from the elevated platform and desk in the Senate well. They included a shirtless man using a bullhorn and wearing face paint at the vice president's chair. Hodgkins wore eye goggles at one point and pulled latex gloves on and off in a bid to aid another rioter, Sedky said.

In charging papers, the FBI said Hodgkins told investigators he took a bus to Washington by himself and saw rioters break windows and engage in a knife fight. But he said he did not participate in violence or vandalism or know those who did. He has been released on conditions including a curfew and GPS monitoring.

Separately Wednesday, a judge dismissed all charges against a suburban New York City man, Christopher Kelly, marking the first time prosecutors abandoned a case against a Jan. 6 defendant. Prosecutors said dropping Kelly's case "serves the interest of justice" based on facts now known to the government.

The government motion to drop four pending counts, including a felony obstruction of Congress charge, did not elaborate on why the matter was dismissed. However, Kelly's attorney Edward MacMahon said in a statement: "I am pleased that the government has dropped all charges against Kelly. He never entered the Capitol on January 6th and that is precisely what he told the government before he was arrested."

Kelly's case was dropped once prosecutors determined that a photo inside the Capitol that he posted to Facebook was not taken by him and did not show him inside the building, according to two people familiar with the investigation who spoke on the condition of anonymity because they were not authorized to speak publicly.

The decision was consistent with a policy in which thousands of people who were on Capitol grounds but did not enter the building have not been charged absent aggravating factors such as assaulting or interfering with police, they said.

Defense lawyers said the episode raised the question of whether the FBI and Justice Department rushed to charge defendants before looking at evidence establishing they did not enter the Capitol, based on evidence such as information from their or other rioters' phones and officers' body-worn cameras. U.S. officials have said they raced to arrest and charge people after the Capitol riot, citing national security concerns over the potential for further political violence, defense attorneys representing rioters have said.