Democrats and Republicans are unified in taking UFOs seriously 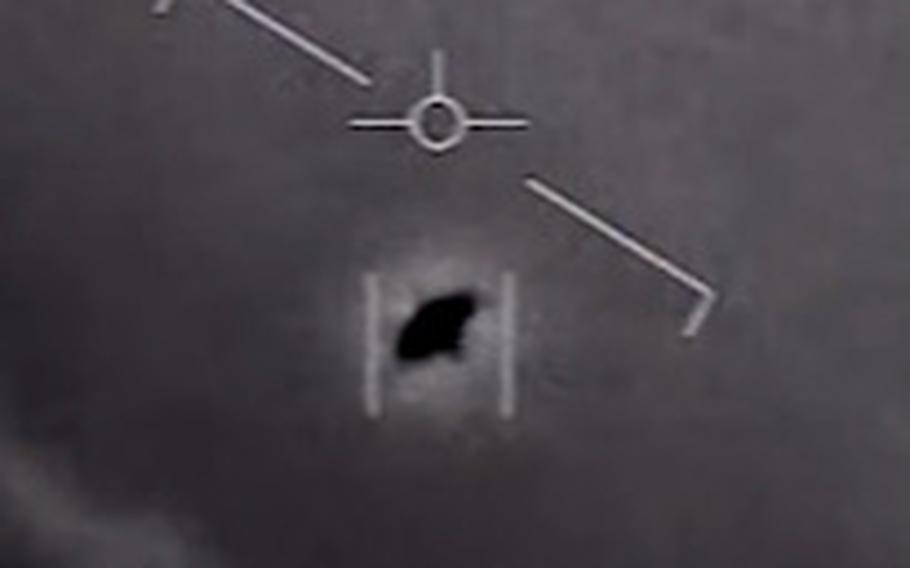 A screenshot from a Navy video published by former Blink-182 guitarist Tom DeLonge’s company “To the Stars Academy” shows what the Navy is now calling an “unidentified aerial phenomenon.” (U.S. Navy)

Last month, former CIA director R. James Woolsey told Black Vault, a website that collects paranormal case files, that he is "not as skeptical as I was a few years ago, to put it mildly," about UFOs, and that "something is going on that is surprising to a series of intelligent aircraft, experienced pilots."

Speaking to CBS's "60 Minutes" last month, Sen. Marco Rubio, R-Fla., said that while UFOs can still prompt a "giggle" from some lawmakers, "I don't think we can let the stigma keep us from having an answer to very a fundamental question."

And a day after Rubio's comments aired, former president Barack Obama told CBS's "The Late Late Show with James Corden" that "what is true — and I'm actually being serious here — is that there is footage and records of objects in the skies that we don't know exactly what they are."

UFOs — also known as Unidentified Aerial Phenomena, or UAPs, in official parlance — are having their moment in politics, and a bipartisan one at that.

Next month, President Joe Biden's director of national intelligence will release a report containing everything unclassified that the U.S. government knows about UAPs as part of a provision contained in former president Donald Trump's pandemic relief package.

When the report lands, as early as Tuesday, it will do so in a moment of rare agreement across the ideological spectrum that UAPs are worthy of further study. An increasing number of Democrats and Republicans — from former Democratic presidential nominee Hillary Clinton and former Democratic Senate leader Harry M. Reid to Fox News host Tucker Carlson — have expressed an openness to UAPs, urging the nation's leaders to investigate the phenomenon.

"After this last year, it's kind of nice to see something that's bipartisan," said Robert Powell, an executive board member of the Scientific Coalition for UAP Studies, a think tank of scientists examining UAPs.

And why now, exactly? "Because!" said former Chicago mayor Rahm Emanuel, who served as Obama's chief of staff. "It's all speculative unknown and a little sci-fi makes it intriguing."

The program, which no longer exists, studied UAPs, including encounters between UFOs and the nation's military. Now a new government program, known as the Unidentified Aerial Phenomenon Task Force, has continued investigating UAPs.

"Let me be clear: I have never intended to prove that life beyond Earth exists," Reid wrote in a New York Times op-edon May 21. "But if science proves that it does, I have no problem with that."

For years, UFOs remained a taboo topic, relegated to the fringe of society, and certainly of politics. But by 2015, while campaigning for president in New Hampshire, Clinton told the Conway Daily Sun she thought Earth might have already been visited by extraterrestrial life and pledged to "get to the bottom of it."

The following year, Clinton's interest in the phenomenon earned her a full story in the New York Times — "Hillary Clinton Gives U.F.O. Buffs Hope She Will Open the X-Files," blared the headline. John Podesta, a noted UFO-phile and Clinton's 2016 campaign chairman, told CNN's Jake Tapper that if she won the White House, "she'll ask for as many [UFO] records as the United States federal government has to be declassified, and I think that's a commitment that she intends to keep and that I intend to hold her to."

More recently, in addition to Woolsey, former CIA director John Brennan also expressed openness to UAPs, as did Carlson, who has devoted portions of his prime-time Fox News show to exploring the phenomenon.

After the "60 Minutes" segment on UFOs aired last month, Carlson said that the issue is "a very big problem" from a national security perspective, arguing that the military under Biden is focusing on the wrong priorities.

"UFOs, it turns out, are real, and whatever else they are, they're a prima facie challenge to the United States military," Carlson said. "They're doing things the U.S. military does not allow, and they're doing it with impunity."

Trump told ABC News's George Stephanopoulos in 2019 that he did "not particularly" believe in UFOs. But he was more coy about the topic when asked by his eldest son, during an interview for his 2020 campaign, to share some details about a 1947 incident in Roswell, N.M, that holds outsize significance among UFO believers.

"I won't talk to you about what I know about it, but it's very interesting," Trump said.

Huge swaths of the country are divided on basic facts — like who actually won the 2020 presidential election (Biden) — while the two political parties can't even agree on a definition for what constitutes "infrastructure." Yet when it comes to UAPs, there is emerging bipartisan and mainstream consensus that, as the "X Files" famously popularized, "The truth is out there."

Christopher Mellon, a former intelligence official at the Defense Department and the Senate Intelligence Committee who has worked to push UAPs in into mainstream discourse, said there were two major turning points recently: a December 2017 New York Times article in which the Pentagon admitted the existence of its program to study UFOs, and public interviews with members of the military talking about their personal encounters with UFOs.

The "60 Minutes" segment, for instance, featured interviews with Cmdr. Dave Fravor and Lt. Cmdr. Alex Dietrich, two former Navy F/A-18F pilots, offering their firsthand account of a 2004 incident over the Pacific Ocean southwest of San Diego, where they say they encountered and tried to engage with "this little white Tic-Tac-looking object," as Fravor described it.

Adam Jentleson, a former top aide to Reid in the Senate, said that as the country moves its faith away from institutions, a growing openness to the paranormal makes sense — even if it is taking the unlikely form of bipartisanship toward UAPs.

"I can't tell if this bodes well or ill for the direction of our democracy, but there's certainly some irony around the fact that we can define bipartisanship around what used to be conspiracy theories," Jentleson said. "Maybe the lesson is that we are expanding our imaginations and the full range of things that are possible. The possibilities of what the future may hold may be beyond the bounds of what a worldview circumscribed by norms can envision."

Powell said the media's depiction of UAPs has also evolved. "Most of the time in the past when the media highlighted what was then called a UFO-type incident, they really were highlighting a person who was really a little bit wacky and they were trying to get ratings."

He pointed to Dennis J. Kucinich, the former Democratic congressman from Ohio, who was mocked during a 2008 Democratic presidential primary debate after being asked about a book by actress Shirley MacLaine, who wrote that Kucinich had seen a UFO while visiting MacLaine in Washington state and found the experience very moving.

"It was an unidentified flying object, okay?" Kucinich said when asked about the account. "It's like, it's unidentified. I saw something."

But now, "this subject today is considered seriously by a lot of scientists," Powell said.

After Obama expressed his openness to UAPs last month, Fox News's Peter Doocy recounted Obama's comments to Biden, and asked him what he thought. "I would ask him again," Biden said, to laughter, brushing off the question.

In a White House briefing last week, press secretary Jen Psaki offered a more serious response to a question on the upcoming UAP report, saying, "We take reports of incursions into our airspace by any aircraft identified or unidentified very seriously and investigate each one."

Administration officials are unlikely to weigh in further on UAPs until the release of the report, a White House official said. This person added that Vice President Harris, in her role as head of the administration's National Space Council, is also likely to be briefed on the findings before they are released.

The interest in UFOs shows how the extremes of the ideological spectrum can end up closer to each other than to any political center — not unlike the two prongs of a horseshoe.

UAPs, he added, "unites conspiracy theorists of all ideological stripes," born out of a shared "distrust of government and authority."

Both the Gallup poll and a more recent CBS News poll from this year found skepticism of the U.S. government's handling of information on the issue. The 2021 CBS poll found 73 percent saying the U.S. government "knows more about UFOs than it is telling the general public," as did 68 percent in the 2019 Gallup poll.

Steve Bassett is a registered lobbyist, political activist and "Disclosure" advocate — someone who pushes for the formal acknowledgment by heads of state of an extraterrestrial presence engaging with the human race. He argues that being more forthcoming about UAPs will serve to strengthen the credibility of the evidence and the government itself.

"The American people may hear from their government the biggest truth, ever relayed, in a formal way to the human race," Bassett said. "Now if you're going to start truth-telling, to regain trust, why not start with a big one?"