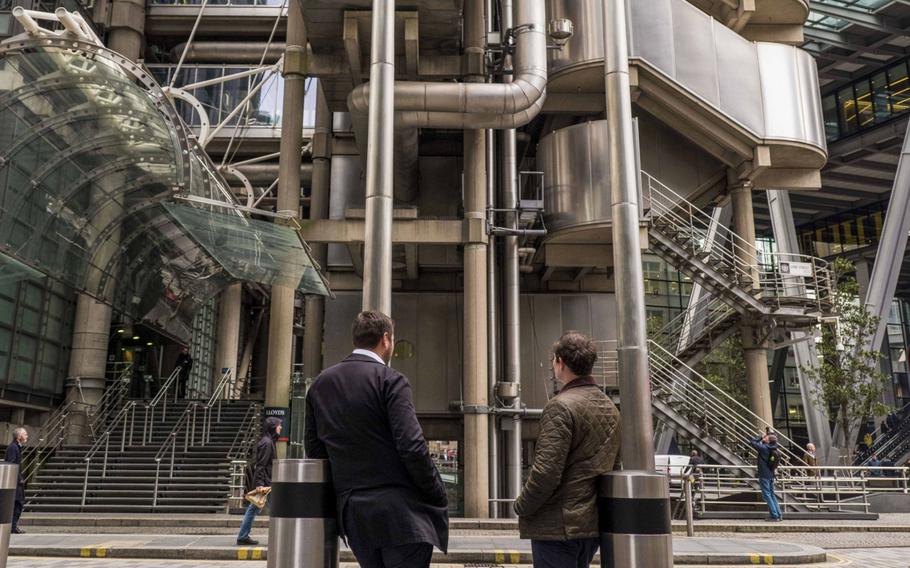 Commuters stand in view of the Lloyds of London building in the City of London on Feb. 17, 2020. (Jason Alden/Bloomberg)

Masked, desk-bound and unable to recognize their colleagues in an elevator, people are starting to return to offices in cities around the world where the pandemic is receding. Many will find their offices transformed, too.

In the challenge to make offices both COVID-safe and attractive places to work, firms have been experimenting with working arrangements and space while employees toiled at home. Some gave up floor space to adjust to less rigid schedules, others introduced movable walls to create flexible areas. Many installed safety innovations such as touchless lifts and worked to improve air quality.

Lockdowns have provided a “fantastic opportunity to create and recreate a new world for each of us, which may, for each company, be slightly different,” said Neil McLocklin, a Knight Frank partner.

Employees of Arcadis, a design and engineering consultancy, will be able to choose one of 20 different types of workspace via an app when they move into new offices in the City of London next month. The company’s Building Intelligence app, developed during the pandemic, provides options for meeting spaces, focused work and collaboration, as well as social and wellbeing areas such as a winter garden.

The app will help monitor the number of people using different spaces, ensuring capacity limits designed to prevent the spread of infection are never exceeded. The limit will initially be set to about one-third of the company’s 1,200 London office users, as it shifts to more work from home. That also means less space is needed: its London office is about 30% smaller than before.

“The app is the critical enabler,” Arcadis’ U.K. Chief Executive Officer Mark Cowlard said. “It helps us understand when people are using meeting spaces so they can be cleaned afterward.”

At the Lloyd’s Building, the iconic home of the 300-year-old insurance market, the externally clad ventilation ducts inject fresh air from the ground up and ejects it after it’s risen through the floors.

“That way of keeping the air fresh in the space is the best,” said Ivan Harbour, senior design partner at Rogers Stirk Harbour + Partners, who cut his teeth on the Lloyd’s building project as a young architect in the 1980s. “Our projects since COVID have really brought that home.”

But ventilation isn’t enough on its own. As the building reopens, face coverings are now a requirement in most of it, underwriters sit at desks bordered by perspex screens and use an app to order their lunch to go.

The importance of making the space accessible and interesting to be in isn’t lost on HR departments. Bringing staff back to the office is already a retention issue: almost 30% of people said they’d look for another job if they need to come back to the office five days a week, according to a global McKinsey & Co. survey.

“It’s like a Rubik’s Cube. You are solving for so many different things at the same time,” said Andrea Alexander, associate partner at McKinsey in Houston, who advises some clients to take a team-based approach so employees are only expected to come in when their close colleagues are too. “It requires you to really think through what are those moments that matter that should be in person.”

Broker CBRE Group Inc. is advising its Fortune 500 clients on a range of issues, from short-term concerns around keeping people safe to longer-term considerations on what the office of the future needs to look like, according to Kate Smith, head of workplace for the U.K.

It’s advising companies on how to “magnetize” their spaces to lure staff back, adding perks like live music that have been among the things people missed most during lockdowns, Smith said.

That’s assuming you can actually fit people in your office. HSBC Holdings Plc has scrapped its London headquarters executive floor as it reduces office space by 40% globally and gives employees more choice to work from home. But in the skyscraper, elevators are the biggest hurdle. Just two people are allowed in a lift at a time, in line with government social-distancing guidelines, keeping office capacity at about 3%, according to a company spokesperson.

The co-working industry — not long ago thought to be on the verge of collapsing — is cashing in on the demand for flexibility. Deloitte LLP has moved its entire Manchester office in the U.K. to 35,000 square feet in a WeWork building in the city center.

WeWork is also trying to make Zooming a little less two-dimensional, signing a deal with ARHT Media Inc. to integrate hologram technology in 16 of its offices around the world.

And bit by bit, the silver-lining amenities are coming back at London’s quirkier offices. At London’s White Collar Factory, as many as 30 employees, policed by a traffic light system, can use the rooftop running track. At WeWork’s U.K. sites, beer taps are reopening after running dry for months to follow government hospitality guidelines.

“It is too early for most organizations to see what it means,” she said. “They are in test-and-learn mode.”