TULSA, Okla. — A "Remember and Rise" concert organized by the Tulsa Race Massacre Centennial Commission was abruptly canceled. Oklahoma's governor was ousted from the commission for pushing limits on how racism is taught in schools. And some residents are planning to boycott the opening of Greenwood Rising, a new museum that construction workers are racing to finish in the heart of Black Wall Street.

As Tulsa commemorates the 100th anniversary of the brutal 1921 race massacre, political tensions and racial divisions have erupted in a city still grappling with how to heal a century after one of the worst incidents of racial violence in U.S. history.

The commission organizing the commemoration has been denounced by some community groups who are staging their own events in Greenwood focused on massacre survivors and descendants.

Amid the strife, the city is braced for armed groups to march through Greenwood, including a Second Amendment demonstration Saturday evening by the New Black Panther Party. And President Joe Biden is scheduled to visit Tulsa on Tuesday, the day the city resumes its excavation of a mass grave in Oaklawn Cemetery that could be connected to the massacre.

Much of the acrimony in Tulsa revolves around the issue of reparations for the violence unleashed by a white mob on May 31, 1921, which left as many as 300 dead and10,000 homeless and destroyed one of the most prosperous Black neighborhoods in the country.

The centennial commission, chaired by Democratic Black state Sen. Kevin Matthews, raised $30 million for the commemoration, the construction of Greenwood Rising and other projects. One of the most highly anticipated events was the "Remember and Rise" gathering on Memorial Day at ONEOK Field, which featured a performance by John Legend and a keynote speech by voting rights activist Stacey Abrams.

On Thursday, the concert was suddenly canceled "due to unexpected circumstances with entertainers and speakers," the commission said in a statement.

But Tulsa activists and lawyers representing three of the last known massacre survivors — Viola Fletcher, 107, her brother Hughes Van Ellis, 100, and Lessie Benningfield Randle, 106 — said the celebrities pulled out after the commission failed to address requests that it use some of its funds to compensate survivors and descendants for what they lost during the rampage.

Matthews told reporters Friday that the lawyers for the survivors had initially sought inclusion in "Remember and Rise" in return for $100,000 each and a $2 million donation to a reparations fund.

After the commission agreed to those terms, Williams said, the request changed to $1 million for each survivor and $50 million for the fund. "We could not respond to those demands," he said.

But his account was disputed by the attorneys representing the survivors in a reparations lawsuit filed last year against Tulsa, Tulsa County, the state and the Tulsa Chamber of Commerce.

The legal team, it said in a statement, submitted a list of seven requests "to ensure the survivors participation with the commission's scheduled events. The list included pledging to raise money for a fund that would provide direct financial support to the survivors and descendants."

In an interview, Matthews said he would not comment on why the celebrities pulled out of the concert. The commission's candlelight vigil, a ceremony scheduled for 10:30 p.m. Central time Monday to mark the time the first shot was fired in the 1921 massacre, will go on as planned.

"It is disappointing the national folks who were going to come to ONEOK Field are not coming," Matthews said, "but that is not as important as the candlelight vigil, where we will honor those who have fallen and gone before."

A number of activists said Matthews did not include survivors, descendants and Greenwood community activists in the initial stages of planning for the city's centennial events.

"I'm speaking from experience," said Jamaal Dyer, senior pastor of Friendship Church in North Tulsa, who resigned from the Tulsa Race Massacre Centennial Commission in 2019. "I was very vocal: 'If we are going to do this for the community, we need to allow them to be part of the decision-making body.' That was not welcomed. A year or two later, they went to them, but they had already started making decisions. They are still trying to control the narrative."

Last week, Oklahoma Republican Gov. Kevin Stitt was ousted from the centennial commission after he signed a bill that would prohibit public school teachers from teaching about "critical race theory" or lessons about race and racism that would make some students uncomfortable.

Carly Atchison, a spokeswoman for Stitt, said in a statement that the governor's role on the commission "has been purely ceremonial."

Meanwhile, city officials have prepared for potential clashes between extremist groups, aware that Tulsa could be a target for white nationalists as well as the New Black Party demonstration scheduled for Saturday.

"Black self-defense groups, and African-American gun clubs from all over America will be gathering by the hundreds (maybe thousands) to demonstrate," the party announced last month. "A national defense program for Blacks is coming into existence."

Tulsa Republican Mayor G.T. Bynum said the city has been working with state and federal officials to make sure "people who want to participate in activities and mourn this event, the worst event in our city's history, feel comfortable being in public doing that with different groups coming to town."

"It's the classic case of hope for the best and prepare for the worst," said Bynum, who reopened the investigation into whether there are mass graves from the massacre.

On Friday, Greenwood bustled with speeches, parades, vendors and a concert headlined by gospel legend John P. Kee that were organized by the Black Wall Street Legacy Festival.

"The Black Wall Street Legacy Festival is the only community-centered series led by survivors and descendants commemorating the 1921 Tulsa race massacre," said organizer Tiffany Crutcher, who testified before Congress on May 19 alongside the three massacre survivors to call for reparations.

Her group arranged for a parade Friday morning that featured the survivors, Fletcher, Ellis and Randle, in a procession through Greenwood and down Black Wall Street. They rode in a white carriage, drawn by a white horse, as they waved to crowds.

Last month Randle issued a cease-and-desist letter demanding the commission to halt using her name or likeness to promote the official commemoration.

The survivors have accused the city of enriching itself by appropriating the massacre for "cultural tourism" that would benefit white developers.

During the May 19 hearing before a House Judiciary subcommittee, Damario Solomon-Simmons, the lead attorney in the reparations lawsuit , told Congress that the city and the centennial commission had not shared any of the $30 million raised for the commemoration with survivors.

"As I speak the same perpetrators of the massacre — the city, the county, the chamber, the state — are utilizing a massacre to pad their own pockets," Solomon-Simmons testified.

"Not one penny has been given to any of the survivors. Not one dime has been paid for any of the outstanding claims."

Tulsa officials have said they cannot comment on the pending lawsuit.

In Oklahoma City, the state capital, Democratic state Rep. Regina Goodwin fought to keep the word reparations in a resolution she introduced to commemorate the massacre, pointing out that the 2001 report by the Tulsa Race Riot Commission called for reparations — a recommendation that was ignored.

Republican lawmakers opposed to reparations urged her to remove the word "reparations" from the resolution.

After much debate, the word was allowed to stay in the House resolution, but it was removed from a resolution introduced in the state Senate.

When Biden arrives in Tulsa Tuesday, where he goes will be watched closely. Will he visit the long-established Greenwood Cultural Center or the new Greenwood Rising? Will he meet with the survivors?

"Any president that comes to Tulsa to recognize the centennial of the Tulsa Race Massacre should be centering the survivors and descendants in every single aspect of their visit and should not lose sight of the fact they just came back from Washington pleading for their humanity to be recognized and that they not leave this earth without reparations," said Dreisen Heath, who wrote the Human Rights Watch report "The Case for Reparations in Tulsa."

On Friday, Heath watched the unveiling of a new Black Wall Street memorial and the lighting of an eternal flame in Greenwood.

"There can be no justice without reparations," Heath said. "Anything short of that has grand implications of the survivors lives, the descendants and broader Black community."

The present-day struggles over a century-old massacre are unlikely to be settled anytime soon, said Michael Mason, a Tulsa journalist and founding member of the Center for Public Secrets, a counterculture arts center.

When Archbishop Desmond Tutu visited this city in 2004, "he called Tulsa a powder keg," Mason said. "That is more true now than it was before because of unresolved tensions surrounding the massacre." 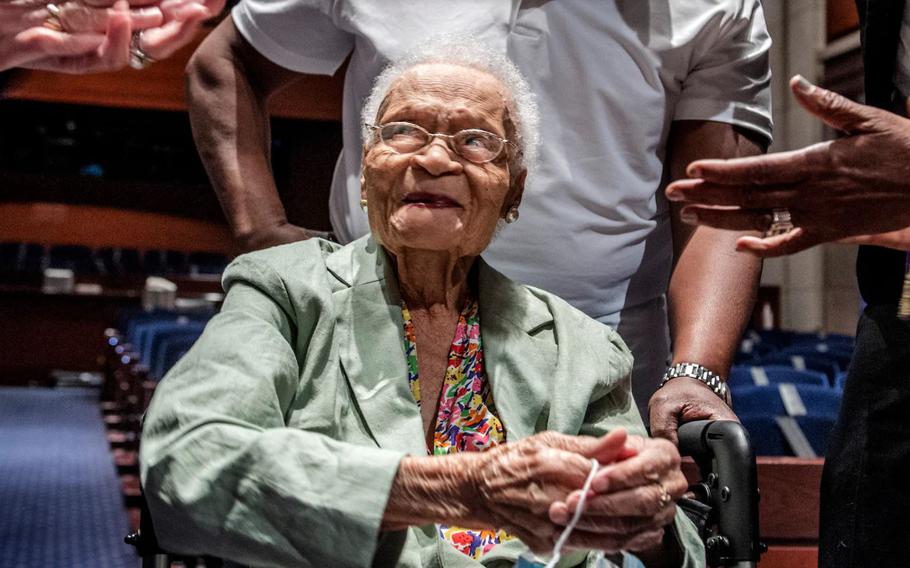 Viola Fletcher, 107, a survivor of the Tulsa race massacre, is shown here in a screen capture from video as she testifies before Congress. (The Washington Post)