The Boots on the Ground for Heroes Memorial is on display at Fort Adams State Park from May 28-31. (Savana Dunning/Daily News)

NEWPORT, R.I. (Tribune News Service) — Standing with his daughter among a row of empty boots and American flags at Fort Adams State Park, former Marine Officer Ryan Maloney knelt for a few moments in front of a pair to pay his respects.

“I’m just here to visit a few friends,” Newport resident Maloney said. “It’s just a good reminder of the sacrifices of the men and women for their family.”

For this year’s Memorial Day weekend, volunteers with Operation Stand Down Rhode Island, a statewide military veteran assistance nonprofit, spent Wednesday and Thursday laying out boots to represent 7,000 U.S. military members killed in action during the post-9/11 War on Terrorism.

Each pair of boots has a placard detailing the service member’s biographical information and military branch, along with a photo and the circumstances of their death. Twenty-nine pairs were arranged in a circle around the Rhode Island state flag at the front of the memorial to represent those service members from Rhode Island. 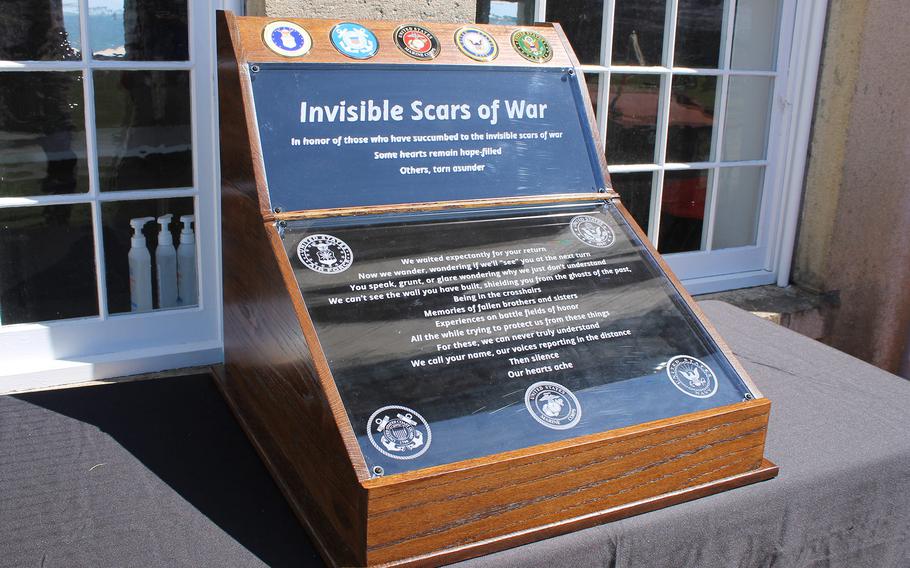 The new Invisible Scars of War memorial honors Armed Forces members who died by suicide either during or after their time of service. (Savana Dunning/Daily News)

“Memorial Day really means something different than barbecues in the beginning of summer,” Operation Stand Down Rhode Island Executive Director Erik Wallin said. “It's a day in which we all pause and we reflect upon the brothers and sisters who didn't come home.

"For us, we hope that people come here and take a few minutes from their Memorial Day festivities, walk these grounds and take in just the scope of the sacrifice that has been made by those who wear the uniform and have not returned home.”

While the organization serves military veterans throughout Rhode Island and is headquartered in Johnston, Wallin said Fort Adams was chosen for the memorial because of its deep, rich military history.

“This is one of the oldest forts in America and one of the largest of its kind,” Wallin said. “This parade field had for hundreds of years served as a location where service members trained. And to have these boots laid out in formation, much like the service members who were in formation on this field, is tremendously moving and powerful.”

On Friday at 10 a.m., the group unveiled a new monument called The Invisible Scars of War, which recognizes those service members who have died by suicide, either during or after their military service. The plaque will have a permanent home in the Operation Stand Down Rhode Island headquarters and be featured at future events. 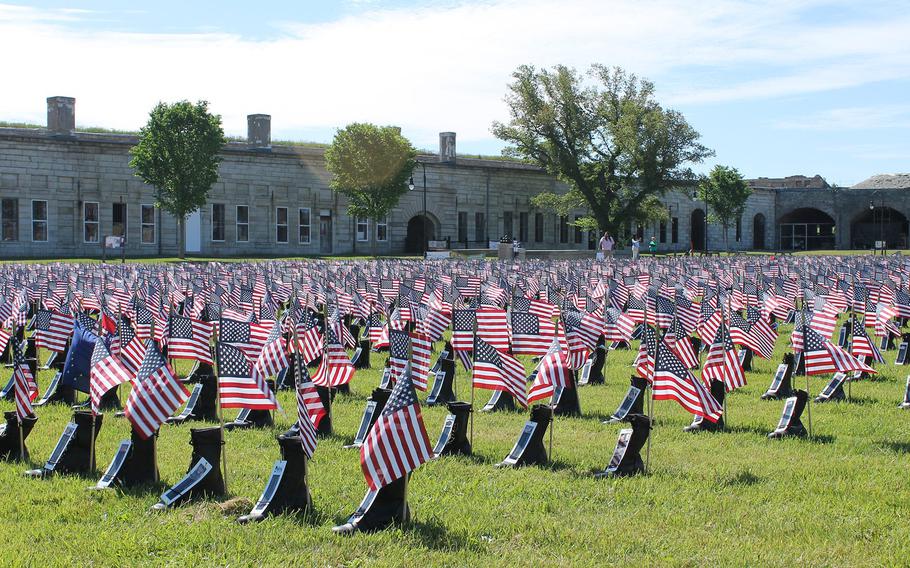 The Boots on the Ground for Heroes Memorial is on display at Fort Adams State Park from May 28-31. (Savana Dunning/Daily News)

“I think this is important and poignant to point out that there's other sacrifices that come with war,” DeQuattro said. “Besides just laying down your life, there's stuff that follows you home and some people just can't deal with it. ... Unfortunately, they take their own lives, and this is why we're going to mark that and remember them today.”

Lynn StGermain-Lundh, who helped unveil the monument alongside DeQuattro, said the memorial touched her personally. Her son was killed in action, and she knew a service member who died by suicide.

“(Post-traumatic stress disorder) can affect anyone, any one of those service members," StGermain-Lundh said. “As a country, we are awesome at getting men and women ready for war, but we totally suck at bringing them home. We just don't do enough to bring our boys and girls back.”

Across the field from Boots on the Ground, Regina Roberts and her husband Ed, parents to one of the remembered service members, Corp. Holly Charette, set up a tent to spread awareness and collect donations for another memorial they plan to place at the Rhode Island Veterans Memorial Cemetery in Exeter.

“There's a lot of monuments throughout the veterans cemetery, or even throughout Rhode Island, that recognize either a significant war or significant coalition or a significant major event," Regina Roberts said. "But this will be the only monument really for the families that have lost the child, a spouse or a sibling. This is one place where they can probably come and have some sort of peace and know that this monument is really dedicated to them.”