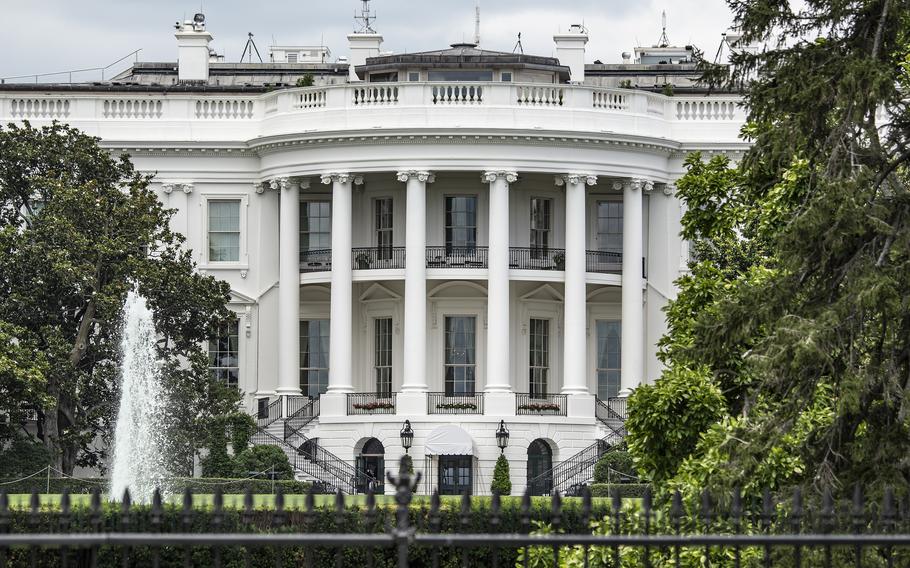 Buy Photo
The White House as seen from the south lawn on May 24, 2018. (Carlos Bongioanni/Stars and Stripes)

WASHINGTON — The White House is set to propose on Friday a $6 trillion budget plan for 2022 as President Joe Biden seeks major changes to the U.S. economy and welfare system, according to two people briefed on the proposal and an internal summary document. The people spoke on the condition of anonymity to discuss a matter not yet made public.

The budget stacks together the numerous policy initiatives that President Biden has already offered in his first four months in office. He has called for a $2.3 trillion infrastructure proposal, a $1.8 trillion education and families plan, and $1.5 trillion in proposed discretionary spending. Biden has made clear, however, that he wants to negotiate many of these measures with Republicans, and the figures are likely to fluctuate if talks pick up momentum. But his first formal budget proposal locks in his vision of an expanded government, offering more services to a broad segment of Americans, particularly the low-income.

This new spending would keep the budget deficit above $1 trillion for the rest of the decade. Even though Biden is proposing numerous changes that he has said would raise revenue, they would not be enough to completely wipe out the gap between spending and revenue through 2031.

The budget would expand non-defense discretionary spending by 16%, with some agencies seeing a huge increase. The Department of Health and Human Services, for example, would see its budget grow by 23% and the Education Department’s would grow by 41%. Biden has said these agencies and others like them need more resources to help American families. This is a break from the Trump administration’s budget proposals, as they often tried to cut domestic agencies and argue that government funding crowded out private investment and led to waste.

The first portion of Biden’s presidency has included numerous spending proposals, and one major piece of legislation that is already impacting the economy. Republicans have begun to decry Biden’s spending proposals as too large and too fast, with some complaining that all this federal money could fuel inflation and hurt the economy.

Biden and his top aides have not backed down from the commitment to expand federal programs, even after signing a $1.9 trillion stimulus package in March that included expanded jobless aid and stimulus checks, among other things.

That law was just the beginning of Biden’s proposed spending plan. He has said this assistance is needed to help rebuild the economy from the devastating shock of the pandemic and what he has alleged was years of neglect for the middle class and lower-income families. He has already offered the infrastructure plan and the families and jobs plan. What makes this budget different, however, is that it is devoted to the broad financing of government operations. Without a budget deal by October, there would be a partial government shutdown. So this package is expected to kick off negotiations with lawmakers about how to proceed on everything from military funding to school programs.

The White House budget projects the U.S. economy will grow by about 5% in 2021, a very fast rate as the country rebounds from the coronavirus pandemic.

Then it projects that the economy would grow at a slightly slower but still healthy 4.3% clip next year before leveling off at around 2% for the rest of the decade.

The amount of outstanding federal debt will be larger than the entire U.S. economy throughout the rest of the decade, hitting 116% of all Gross Domestic Product in 2027. Taxes are projected to increase by more than $3 trillion over the decade, in line with what the president has proposed as part of his economic programs.

The overall spending and deficit figures were first reported by The New York Times. The Washington Post reported last week that the budget would mirror what has already been proposed, essentially holding back on concrete proposals for a public health care option or sweeping prescription drug reforms.

The budget will include calling on Congress to create a public health care option and give Americans older than 60 the option to enroll in Medicare, according to a document obtained by The Washington Post, but does not advance specific policies for doing so and is not incorporated into the cost of the budget itself.

“The President’s budget will focus on advancing the historic legislative agenda he’s already put forward for this year,” said Rob Friedlander, spokesman for the White House budget office, in a statement last week. “The budget won’t propose other new initiatives but will put together the full picture of how these proposals would advance economic growth and shared prosperity while also putting our country on a sound fiscal course.”

The White House offers a budget early each year that maps out its request for funding in the fiscal year that begins in October. The government’s budget usually consists of multiple parts. There are parts of the budget, known as discretionary spending, that must be renewed by Congress each year. These include money for the military, education department, and a range of other programs.

Then there is another section of the budget known as “mandatory spending” that includes money that is largely on autopilot and doesn’t need congressional reauthorization. This includes many large government expenditures, such as Social Security, Medicare, Medicaid, and a range of safety net programs.