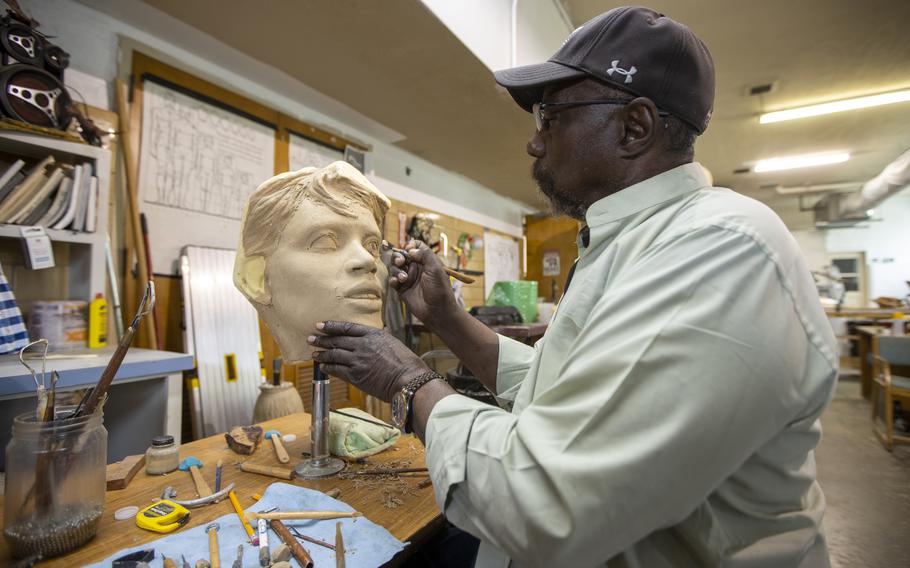 In his studio in Lubbock, Texas., Eddie Dixon demonstrates how he adds details to the eyes of a sculpture. He designed a Buffalo Soldier for the U.S. Military Academy. (Brad Tollefson/For The Washington Post)

LUBBOCK, Texas — Late into the night, in his studio on Avenue X, surrounded by props and tools and diagrams of the human form, sculptor Eddie Dixon worked on the Buffalo Soldier’s face.

It was the hardest part of the equestrian statue he was making for the U.S. Military Academy at West Point. The only pictures he had of the late Sgt. Sanders H. Matthews Sr. were photos of him as an elderly man, or with a smile.

So before he began to sculpt in clay, Dixon, 73, sat down in his converted firehouse here and began to sketch. He eliminated Matthews’ smile, and de-aged his face until he had the image of a serious-looking African American soldier in his prime.

Dixon went on to complete his model of Matthews, believed to be the last known Buffalo Soldier to serve at West Point. And one day early this month, he paced his studio in a dark baseball cap as an expert from a foundry began slicing it apart with a razor and a pipe saw. It was one of the final steps in the project to get a bronze version of the model ready for installation this summer at West Point. There, it will honor the little-known unit of Black soldiers that taught horsemanship to generations of White Army officers amid the harsh racial oppression of the time.

Portions of the model had to be cut apart to make individual molds for the 1,800 pounds of molten bronze that will go into the statue, said Tommy Ladd, owner of Schaefer Art Bronze Casting, the Arlington, Texas, foundry where the work will be done.

If all goes as planned, the 10-foot-tall piece — depicting Matthews on horseback with a cavalry flag — will be taken on a flatbed tractor trailer to West Point in late August and unveiled in early September, project organizers said.

The statue is a gift to the academy from the Buffalo Soldiers Association of West Point, which raised roughly $1 million for the project, said retired Army Maj. Gen. Fred Gorden, who headed the fundraising effort.

It will be erected on West Point’s Buffalo Soldier Field, near where the old stables once stood.

Most people have no idea that Buffalo Soldiers were at West Point, Gorden said. “They served . . . quietly, confidently, skillfully,” he said. “They were standard-bearers.” Tommy Ladd, owner of Schaefer Art Bronze Casting, uses playing cards to mark the areas where the statue will be cut and molded. The statue is taken apart before being cast in bronze at the foundry. (Brad Tollefson/For The Washington Post)

Dixon, the sculptor, and his assistant, Ralph Chilton, have been working on the piece since January, checking with West Point officials to make sure they were getting the details right.

The model was built on an inner structure of carved foam, over which Dixon spread a layer of light brown clay.

Buttons, buckles, and insignia were carefully made out of wax or resins. Chilton made the model of the flag, with a wave in it, out of metal. He crafted the rider’s sword, using picture-hanging wire to imitate decorations on the handle.

Dixon ordered old pieces of equipment such as an Army hat, cavalry spurs and leather leggings from military suppliers so he could copy them accurately in clay.

At one point, Dixon said, the West Point historians pointed out that the style of bit in the horse’s mouth predated the 1907 arrival of the Buffalo Soldiers by four years.

“I wanted to kick myself,” he said. He knew the difference but had mistakenly focused on an image he saw on a re-enactor’s horse. He corrected the mistake.

The leggings were made to look like those worn in 1907, said David M. Reel, director of the West Point Museum, who assembled a team of historical advisers. The saddle had to be the 1885 McClellan style, and the flag anchor in the rider’s right stirrup from 1904.

Chiefly members of the Black 9th and 10th U.S. cavalry regiments, the Buffalo Soldiers are known for fighting Native Americans in the American West in the late 1800s.

The Cheyenne and Comanche named them for what they saw as a similarity of the soldiers’ hair and skin color to that of the American Bison, historians say. “They looked like buffalo,” Dixon, who is Black, said.

But starting in 1907, a detachment of Buffalo Soldiers was posted at segregated West Point to instruct the cadets in the fine points of horsemanship - and to do menial work across the campus.

The training had previously been done by a White cavalry outfit, which suffered from poor morale, indiscipline and low reenlistment rates.

The arrival of the Black soldiers solved the problem “pretty much over night,” Army reports showed. Buffalo Soldier morale, discipline and reenlistment rates were all high, according to historian Brian G. Shellum.

The Buffalo Soldiers served at West Point until 1947; the next year, the Army was racially desegregated, Shellum has said. 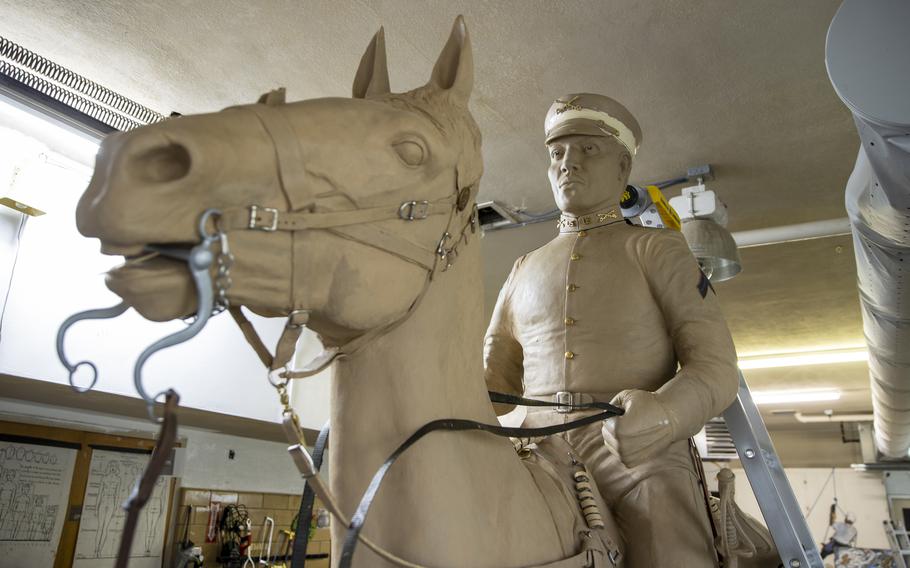 Meanwhile, as Dixon watched Ladd dismantle the model in the old brick firehouse, the sculptor talked.

He quoted from a Carl Sandburg poem, discussed the ancient warrior queen Tomyris and related a folk tale told by his grandmother. He condemned the attitude of President Woodrow Wilson toward African Americans, recounted the story of the World War I Black aviator Eugene Bullard and told of his own failed attempt to avoid the draft during the Vietnam War.

He wound up serving two tours of duty in Vietnam, and he wears a baseball cap that says “Agent Orange Health Club, Life Member.”

Dixon thinks exposure to the substance used as a defoliant in Vietnam caused his chronic cough and respiratory problems. “They sprayed it over us,” he said. “Nobody said, ‘Get out of the way.’”

An amiable man, he said he has made many Buffalo Soldier sculptures over the years for museums and other sites. And he feels an affinity. “Naturally, you would feel an empathy toward soldiers, for the simple fact that I was one,” he said.

“For this moment in time, people will know about them,” he said. “They’ll know that these people actually existed. When I was coming up ... we didn’t have any heroes. Our heroes were [people like] John Wayne. How could I relate to John Wayne?”

The West Point sculpture is the culmination of a project that was started by Sanders Matthews before he died at age 95 in 2016.

When his 23 years of service, most of it at West Point, ended in 1962, he became the first African American police officer in nearby Highland Falls, N.Y. He then returned to West Point as a campus bus driver, according to the Buffalo Soldiers Association, an organization he founded in 2008.

He and his wife, Cora, who were married for 74 years, are buried in the West Point cemetery.

In 1973, the academy installed a Buffalo Soldier memorial plaque on a rock on campus and renamed a sports field for the outfit. The gesture appeared fitting for the time, but almost 50 years later, the plaque seemed inadequate.

“It was obscure,” said Gorden, who in the late 1980s was the first Black commandant of cadets at West Point. “It was in a copse of trees. ... It was not accessible. And there was nothing there to indicate that that rock was anything more than a rock.”

Sanders Matthews wanted something better. And Dixon received the assignment.

But Matthews did not know he would be the model, his granddaughter said.

“He did not ask for that,” she said. He was mostly concerned with the accurate depiction of the horse. “After we got the horse right, he didn’t care, ‘Whatever you want to do.’”

She said she is hoping the statue can be escorted by well-wishers on its journey from Texas to West Point this summer and that an unveiling ceremony can be attended by VIPs.

“My grandfather was an icon both at West Point and in the community,” she said. “Everybody knew [the statue had to depict] him. He’s been the one leading the charge. ... Even to the day he died that has been ... his battle cry.”