WASHINGTON — Amy Logan first experienced physical abuse three years into her marriage to a sergeant major in the Army.

Logan was away from friends and family once she moved to a new military base, similar to many military spouses who are isolated and unaware of resources available to them.

One night, Logan’s husband at the time charged at her, grabbed her shoulders and his knee struck her in the leg after Logan attempted to discuss how her husband spoke down to their child for crying. A few days after the assault, Logan went with her child to a women's safe shelter and eventually filed for a divorce, she said. 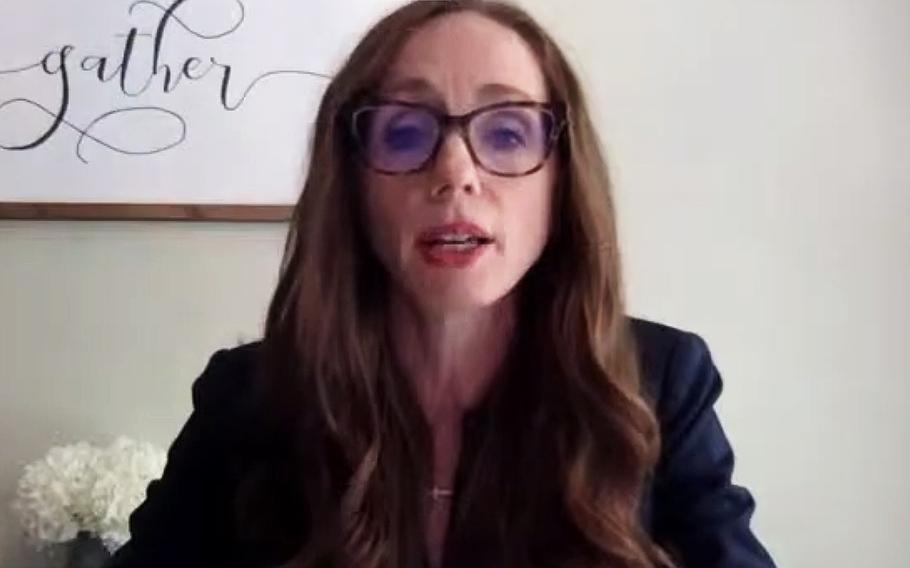 “He told me, ‘I would rather go to prison than let you leave with our child.’ I took this as a verbal threat to my life,” Logan testified during a hearing on domestic violence in the military held by the personnel subpanel of the House Armed Services Committee.

Incidents of spouse abuse in the military are at about 1.1%, according to Defense Department data from 2019. That rate is more than twice that of the national population, which is .42%, said Jessica Strong, co-director of applied research at Blue Star Families, a nonprofit organization that advocates for military families.

“Many factors that are endemic to the military lifestyle placed military spouses at greater risk of experiencing [intimate-partner violence], including economic vulnerability, social isolation, mental-health concerns and military culture itself,” Strong said.

Logan said she called the local police three times in response to different incidents related to her now ex-husband’s behavior, but the local Army base was never notified. After the first incident, Logan’s leg began to swell from the force of the impact, and she was not able to bend her knee.

A military and family life counselor from her husband’s brigade attended every court hearing during their eventual divorce and testified on behalf of Logan’s ex-husband despite Logan’s testimony on the physical abuse that she endured, she told lawmakers.

Logan took matters into her own hands by reporting her former husband to the military, yet a case review committee did not grant her a military protection order. The colonel who led the committee was her husband’s brigade commander, who determined the sergeant major should remain in his command.

Later, Logan filed a report to the inspector general’s office on base over how the colonel handled her case. The IG took the complaint directly to the colonel, Logan said, the person who her complaint was filed against.

She was told the colonel would send her a letter stating that he received the report and took action, but Logan never received that letter.

A congressional inquiry filed by Logan also resulted in a commanding major general opening an internal Army investigation, known as a 15-6. But Logan said she still has not been told what action was taken as a result of the investigation, despite the risk she took in coming forward.

“Throughout all of these military investigations, I felt they questioned the validity of my complaint, based on what I did not do instead of what was done to me. Individuals in the military responsible for decisions regarding domestic abuse need to learn more about abuse,” Logan said.

The installation, Logan’s ex-husband and the colonel were not named in Logan’s written testimony to House lawmakers.

Logan’s testimony “exposes all the flaws in the military’s handling of domestic violence… we can no longer ignore this,” Speier said.

Those shortfalls were highlighted in a recent report from the nonpartisan watchdog, the Government Accountability Office that concluded the Defense Department must enhance its prevention, response and oversight to domestic abuse.

The hearing also comes at a time when the military’s handling of sexual assault and sexual harassment cases has become a flashpoint in Congress this year, while the issue of domestic violence and abuse in the military and how those cases are handled has not gotten as much attention.

More than 40,000 incidents met the Defense Department criteria for domestic abuse between 2015 and 2019 and 74% of those incidents were physical abuse, Speier said.

Brenda Farrell, director of defense capabilities and management for the GAO, wrote the watchdog report and testified at the hearing. She said the top concern is the department is not collecting comprehensive data on the number of allegations of domestic violence and related actions taken by commanders, despite a statutory requirement since 1999 to do so.

“As a result, DOD is unable to assess the scope of alleged abuse, and the rate of substantiation. To address these challenges, we recommended that DOD clarify its guidance to the services for submitting data and develop a quality control process to ensure complete and accurate data on allegations of abuse,” she told House lawmakers.

Additionally, the report found gaps exist in creating awareness of domestic abuse, reporting options and resources and victim risk assessment. The military services also performed limited oversight of commanders' disposition of domestic violence incidents, or oversight of a commander’s decision whether to pursue a court-martial and other forms of punishment or to take no action at all.

Speier asked department officials who appeared at the hearing about why the picture on the number of domestic abuse incidents is incomplete.

Patricia Barron, deputy assistant secretary of defense for military community and family policy, said she is “committed to making sure that this solution gets to fruition.”

“We have started on some of the procedures that we need in order to get this done,” she said.

Speier said the subcommittee is going to require another meeting with Barron in the next couple of months “because this is just really unacceptable.”

Defense Department officials would also not confirm Tuesday whether the rate of intimate-partner violence is higher in the military than in the civilian population in response to a question on the rates from Rep. Chrissy Houlahan, D-Pa. They said they would respond to the congresswoman in writing at a later date.

“I believe that there is data and I would welcome it when it comes back… this is something that's really concerning when your business - and I'm an Air Force vet - your business is national security and readiness” she said.

Houlahan asked what steps the department has taken to address a culture of “toxic gender tropes” that create an unsafe environment for service members and military families.

The Defense Department has directed the RAND Corp. to examine the factors of military life that might lend themselves to domestic abuse and intimate-partner violence, Barron said.

Army Col. Steve Lewis, family advocacy program manager, said the testimony from Logan, as well as the recent independent report on the toxic command climate at Fort Hood, “gives us an opportunity to really take a deep look at the climate and culture of the Army.”

Climate and culture are also part of the Army’s “People’s First Task Force,” established in response to the Fort Hood report released in December, Lewis said.