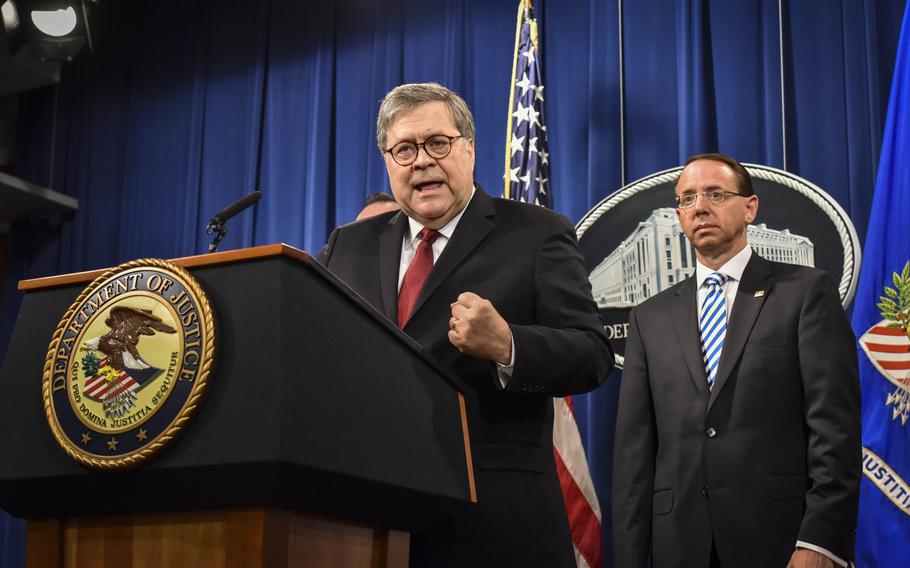 WASHINGTON — The Justice Department has released part of a key internal document used in 2019 to justify not charging President Donald Trump with obstruction, prompting a federal judge who wants to disclose the entire document to offer more blistering criticism of former attorney general William Barr.

Two new court filings — one late Monday night and another made public Tuesday — offered details about how Barr ended a possible obstruction case against Trump, and how the department's handling of that politically explosive question has drawn the ire of U.S. District Judge Amy Berman Jackson.

The ongoing fallout from the handling of special counsel Robert Mueller's findings is likely to fuel and frustrate Trump's biggest critics, particularly Democrats who have long argued that Barr stage-managed an exoneration of Trump after Mueller submitted a 448-page report describing his investigation into whether the 2016 Trump campaign conspired with Russia to interfere in the election, and whether Trump tried to obstruct that investigation.

The central document at issue is a March 2019 memo written by two senior Justice Department officials who argued that aside from important constitutional reasons not to accuse the president of a crime, the evidence gathered by Mueller's team did not rise to the level of a prosecutable case, even if Trump were not president.

Portions of the memo that remain sealed contain brief factual and legal analyses of at least some of the incidents of possible obstruction that Mueller found. The memo concludes that each did not meet the threshold the Justice Department would need to file a criminal case, even if doing so had been possible, according to people familiar with the matter who spoke on the condition of anonymity because the document is sealed. The analysis focused at least in part on the lack of a precedent for building an obstruction case around instances of the president using his executive power in ways that would normally be allowed, such as the firing of James Comey as FBI director in 2017, these people said.

Earlier this month, Jackson issued a scathing opinion saying that she had read the memo and that it showed Barr was disingenuous when he cited the document as key to his conclusion that Trump had not broken the law. On Tuesday, in response to the Justice Department's filing overnight, Jackson ordered public release of the still-secret portions of her opinion.

"The suggestion that the Attorney General's advisors were helping him make a decision about whether to initiate or decline a prosecution is contrary to the very memorandum at issue," Jackson wrote in a newly unsealed section. "So why did the Attorney General's advisors, at his request, create a memorandum that evaluated the prosecutive merit of the facts amassed by the Special Counsel? Lifting the curtain reveals the answer to that too: getting a jump on public relations."

Jackson concludes that rather than weigh legal issues, the memo shows Barr's Justice Department "was girding for a preemptive strike on the Mueller report instead."

Justice Department lawyers had sought to ease the judge's anger by releasing part of the memo publicly, but not its detailed discussion of the evidence against Trump, saying they would ask an appeals court to keep that section secret.

"In retrospect, the government acknowledges that its briefs could have been clearer, and it deeply regrets the confusion that caused. But the government's counsel and declarants did not intend to mislead the Court," the Justice Department lawyers wrote in asking the judge to keep the rest of the document under seal while they appeal her ruling.

This fight over the document emerged out of a lawsuit filed by the watchdog group Citizens For Responsibility and Ethics in Washington, whose president Noah Bookbinder said the department's decision to appeal "is legally and factually wrong and that undercuts efforts to move past the abuses of the last administration."

Parts of the memo released Monday night offer a clearer view into why the judge was angry — and they indicate the decision not to accuse Trump of a crime had been the subject of previous conversations among Justice Department leaders.

The memo written by Steven Engel, then head of the department's Office of Legal Counsel (OLC), and Edward O'Callaghan, then a senior department official closely involved in supervising the Mueller investigation, was addressed to Barr, then the attorney general.

"Over the course of the Special Counsel's investigation, we have previously discussed these issues within the Department among ourselves, with the Deputy Attorney General, and with you since your appointment, as well as with the Special Counsel and his staff. Our conclusions are the product of those discussions, as well as our review of the Report," the lawyers wrote in the newly public section.

For decades, Justice Department policy has held that sitting presidents could not be charged with a crime. But the memo to Barr went beyond that constitutional position, arguing "certain of the conduct examined by the Special Counsel could not, as a matter of law, support an obstruction charge under the circumstances. Accordingly, were there no constitutional barrier, we would recommend, under the Principles of Federal Prosecution, that you decline to commence such a prosecution."

The memo also argued that the Justice Department should make a decision whether Trump broke the law — even though Mueller had very carefully avoided answering that question, citing Justice Department policy against charging a sitting president.

"The department should reach a conclusion on whether prosecution is warranted," the memo said. "The department either brings charges or it does not . . . That principle does not change simply because the subject of the investigation is the president."

For that reason, Engel and O'Callaghan urged Barr "to determine whether prosecution would be appropriate given the evidence recounted in the Special Counsel's Report, the underlying law, and traditional principles of federal prosecution."

David Laufman, a former senior Justice Department official, said the portion of the memo unsealed so far shows "the integrity of this legal analysis is suspect," noting it's unusual for the Office of Legal Counsel to opine on whether evidence in a case is sufficient to launch a prosecution. Laufman also said the fact that O'Callaghan, a senior political appointee outside the OLC, helped write the memo "creates the impression that this was simply a results-oriented product intended to benefit President Trump."

Barr ultimately made public arguments that closely tracked those in the memo.

Barr and Engel declined to comment for this article. O'Callaghan did not respond to requests for comment.

Jackson's opinion noted that Barr told Congress that he and his deputy reached the decision that Trump should not be charged "in consultation" with the Office of Legal Counsel and other department lawyers. Barr testified about the deliberations after Mueller wrote a private letter complaining to the attorney general that his description of Mueller's report before its public release had led to misunderstandings about what the investigation found.

"The Attorney General's characterization of what he'd hardly had time to skim, much less, study closely, prompted an immediate reaction, as politicians and pundits took to their microphones and Twitter feeds to decry what they feared was an attempt to hide the ball," Jackson wrote.

The OLC is a critical but little-known part of the federal government, providing legal advice to presidents and their administrations. Democratic and Republican administrations often cite OLC memos as the legal justification for controversial policy decisions, but the contents of such memos are usually closely held secrets within the government.

In the case of the memo on whether Trump could be charged, the judge concluded that, rather than Barr following OLC advice, his decision and the memo "were being written by the very same people at the very same time," working "hand in hand to craft the advice" that the office supposedly delivered to Barr.

"Not only was the Attorney General being disingenuous then, but DOJ has been disingenuous to this Court with respect to the existence of a decision-making process that should be shielded by the deliberative process privilege," Jackson concluded, writing the memo "was expressly understood to be entirely hypothetical" and that prior redacted versions of the document "deliberately obscured this fundamental aspect of the exercise."

The judge found that claims made by the department to try to shield the memo from public scrutiny "are so inconsistent with evidence in the record, they are not worthy of credence," and said the department sought to "obfuscate" that it had set out to create a legal justification for a decision Justice Department leaders had already made — to not accuse the president of a crime.