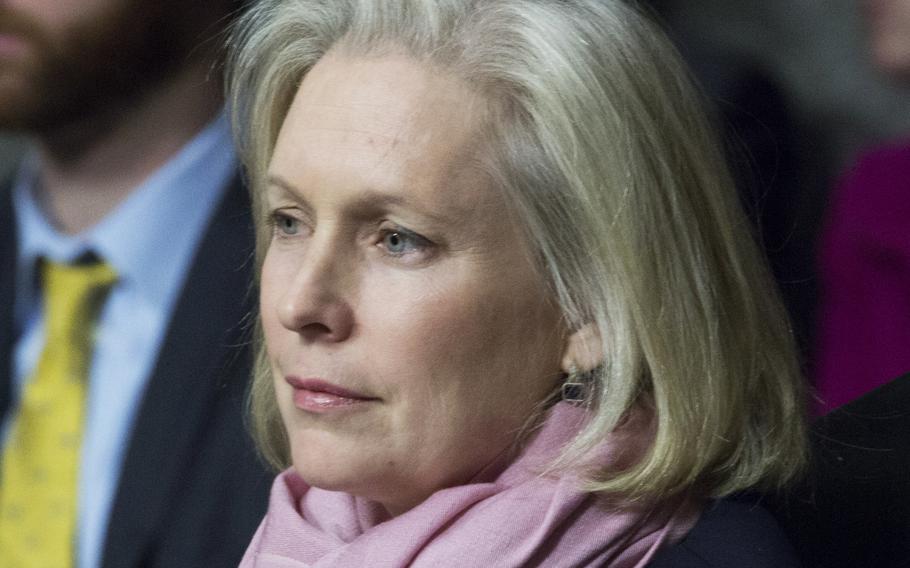 Buy Photo
Sen. Kirsten Gillibrand, D-N.Y., shown here at a hearing in 2017, wants prosecution decisions on all major crimes in the military to be made outside the chain of command. (Stars and Stripes)

WASHINGTON (Tribune News Service) — Until Monday evening, by most public appearances, a growing consensus in Congress favored stripping military commanders of authority to decide which sexual crimes in the ranks should be prosecuted and instead empowering independent prosecutors to make those calls.

The reality, senators showed on the floor Monday night, is far more complicated and contentious.

Inside congressional offices, tense disagreements have erupted in recent weeks over whether to authorize military officials outside the chain of command to make prosecution decisions over not just sexual offenses but also nearly all major crimes.

On May 23, Senate Armed Services Chairman Jack Reed issued a statement saying he plans to include in the fiscal 2022 defense authorization bill a provision moving to independent prosecutors’ offices decisions on prosecuting sexual crimes. Such a move was recently endorsed by a so-called Independent Review Commission in the Pentagon, Reed said.

Reed’s Sunday morning statement showed that the Rhode Island Democrat and former Army captain, who completely opposed such a change until now, has altered his position, as have many military leaders and dozens of lawmakers.

But Reed endorsed a proposal that would limit the change to covering just sexual crimes. He did not endorse a measure by New York Democrat Kirsten Gillibrand, who chairs the Senate Armed Services Personnel Subcommittee, that would move prosecution decisions on all major crimes outside the chain of command.

Gillibrand’s bill would set up a special office to make such decisions about rape, murder, child pornography and more, with an exception for crimes like desertion that are military-unique.

Reed’s statement was widely seen as the latest endorsement for changing how sexual assault is prosecuted in the military.

However, to supporters of Gillibrand’s bill, Reed’s move represented an attempt to limit the bill’s applicability, in line with Defense Department wishes — and to limit Gillibrand’s options.

On Monday, those tensions went public when Gillibrand tried to get unanimous consent to bring her bill up for a vote, and Reed blocked it.

Gillibrand was backed up on the floor by Republicans Charles E. Grassley and Joni Ernst of Iowa, as well as Democrat Richard Blumenthal of Connecticut. Reed was backed by Oklahoma Republican James M. Inhofe.

Gillibrand’s unusually blunt comments on the floor clearly showed tensions between her and Reed over the issue.

Reed contended that the best way to build legislation is through the committee’s input.

“If we want to go ahead and make fundamental change, committee consideration can only assist that change,” Reed said.

Gillibrand shot back that the committee has squandered its chance over eight years and has already fully considered the issues. It is time, Gillibrand said, for the Senate to just vote.

She said she had been denied a vote by Reed and Inhofe in particular.

“The Armed Services Committee has lost its opportunity to have sole jurisdiction over this issue,” she said. “We deserve a floor vote and we deserve a process that cannot be undermined by the committee.”

Gillibrand and Ernst made clear they are worried that, even if the House and Senate pass legislation along the lines of Gillibrand’s proposal, the conference committee writing the final bill could dilute it as has happened in the past.

Likewise, Don Christensen, president of Protect Our Defenders, a human rights group that backs Gillibrand’s wider proposal, said he fears that Reed, while appearing supportive of change, is doing the Pentagon’s bidding and trying to control the agenda by including the narrower version in the NDAA and forcing Gillibrand’s allies to remove or alter it in committee or on the Senate floor.

“Without a doubt, significant reform is coming to the military justice system, and my hope is this will be a broad-based approach that includes all common felonies like murder and robbery,” said Christensen, a former top Air Force prosecutor.

Gillibrand’s bill, which has been stymied for nearly a decade, has garnered this year at least 63 Senate supporters, enough to overcome a filibuster. Support for her bill and a comparable one in the House by California Democrat Jackie Speier swelled after last April’s murder at Fort Hood, Texas, of 20-year-old Army Specialist Vanessa Guillén.

Guillén’s alleged killer was another soldier, Specialist Aaron Robinson, who killed himself a few days before the charge was announced. Guillén’s family said she had been sexually harassed prior to her killing.

While the difference between Reed’s approach and Gillibrand’s may not appear major to most observers, Guillén’s murder might not be covered by the more limited sex-crimes-only approach endorsed by Reed, supporters of Gillibrand’s measure say.

And creating a special prosecution office for just sexual crimes could be seen as a “pink court” and contribute to the myth that those accused of rape or sexual harassment are likely to be convicted — which is the opposite of current trends, Christensen said.

Tom Porter, executive vice president of government affairs at the Iraq and Afghanistan Veterans of America, an advocacy group with more than 425,000 members, said addressing sexual assault is the primary driver behind a desire for legislation to change military justice. But, he added, Gillibrand’s single prosecutor’s office for all major crimes that are not uniquely military makes the most sense.

“We agree that you ought to have unbiased, professional decision-making for all serious crimes,” Porter said.

Speier’s proposal, meanwhile, would require that only sexual crimes be referred to independent experts for prosecution decisions. But Speier, who chairs the House Armed Services Military Personnel Subcommittee, is not opposed to widening the types of crimes that are weighed independently.

“Senator Gillibrand, who has also long worked on this issue, and I share the same goal of taking these cases out of the chain of command and our approaches are complementary,” Speier told CQ Roll Call in a statement Monday. “We are working closely together to make sure that these crucial reforms become law this year. And with the shift in attitudes among our colleagues in both chambers, I’m confident we will get this done.”

As passionate as Gillibrand has been about moving such decisions on all major crimes outside the chain of command, she too appears willing to accept less than her full proposal, if absolutely necessary.

Hawaii Democrat Mazie K. Hirono, a member of the Senate Armed Services Committee, has introduced a Senate companion to Speier’s bill, and Gillibrand is a co-sponsor.

In another sign that supporters of change are willing to take anything they consider progress, Hirono also co-sponsors the Gillibrand bill, despite its different approach from Speier’s.

Last April, President Joe Biden signed on to Gillibrand’s wider approach to the problem without naming her legislation.

He was asked at a town hall whether he supported “empowering experienced military prosecutors to make prosecution decisions for non-military crimes — serious felonies like rape, murder, and child abuse.”

“When I was vice president, that was my position as well. As a matter of fact, I had a real run-in with one of the members of the Joint Chiefs in the Cabinet Room on that issue,” he said. “Look, we have to change the culture of abuse in this country, especially in the armed services.”