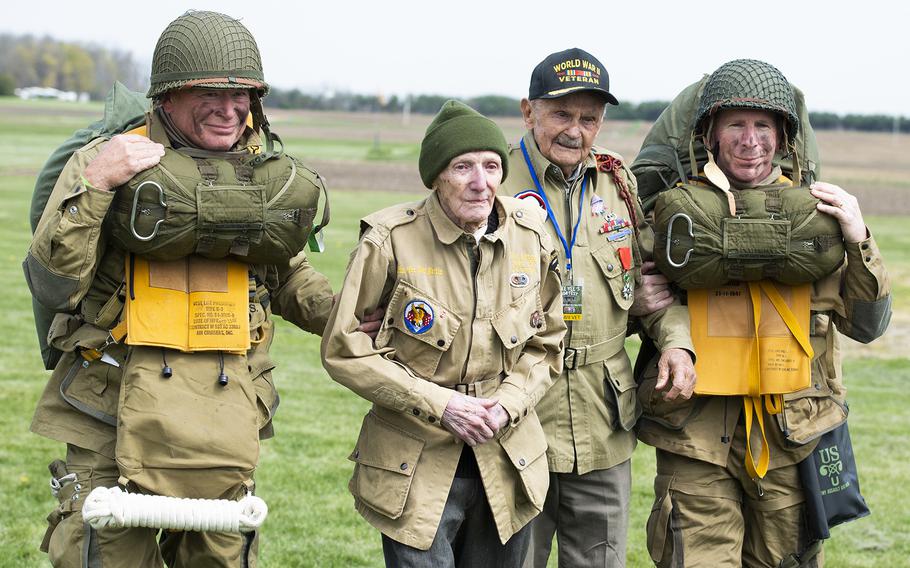 Karen Waldrup visited Martin’s home in Sugarcreek Twp. and interviewed him about his life to write a song about his experiences in World War II. Waldrup is known for her songs “Justified” and “Does She Pour Your Whiskey.”

Martin, a Greene County resident, parachuted into Normandy near Saint-Come-du-Mont behind Utah Beach at 12:30 a.m. on D-Day. Martin later fought in the Battle of the Bulge, and he received a Bronze Star, Purple Heart and European African Middle Eastern Service Medal for his service. Martin earned the nickname “Pee Wee” by being the lightest paratrooper in his regiment. He turned 100 on April 29. “His memory was totally on point,” Waldrup said. “We were able to just write straight from what he was saying.”

“It’s so rare that he’s still here. He kept saying he wasn’t a hero,” Waldrup said. “He doesn’t see it like we see it.”

Waldrup first met Pee Wee Martin at his hundredth birthday celebration when she was asked to perform.

“My fans were freaking out that I got to meet him,” Waldrup said.

After being in Ohio, Waldrup performed in Key West. She saw someone from CreatiVets, which is an organization that writes songs with veterans. They gave her the idea to write a song about Pee Wee Martin.

“I’d never done anything like this before. It was one of the easiest things I’ve ever done,” Waldrup said. “He was so easy to talk to.”

Waldrup said her song, which she’s calling “In the Morning,” will be done later this summer. She was not sure when it would be released. Waldrup is writing the song with musician, Hunter Jergens, who is from New Carlisle.

“It was a neat experience,” Jodi Martin said.

Waldrup will be back in Greene County on June 12 opening for Craig Morgan at Caesar Fest at Caesar Ford Park. She said she hopes she gets to see Pee Wee Martin while in town.