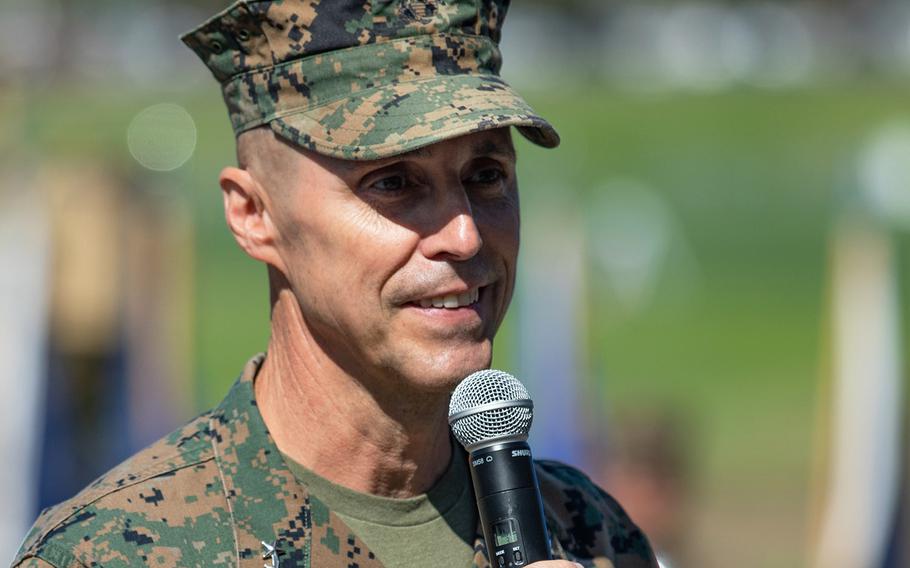 U.S. Marine Corps Maj. Gen. Robert F. Castellvi, the outgoing commanding general of the 1st Marine Division, speaks during a change of command ceremony held at Marine Corps Base Camp Pendleton, California, Sept. 22, 2020. Castellvi was suspended from his duties after an investigation into the deadly sinking last year of an amphibious assault vehicle determined he was in part responsible for the accident. (Jailine L. AliceaSantiago/U.S. Marine Corps)

WASHINGTON — A Marine Corps major general has been suspended from his duties after an investigation into the deadly sinking last year of an amphibious assault vehicle determined he was in part responsible for the accident, a service official said Monday at a House hearing.

Gen. Gary Thomas, the assistant commandant of the Marine Corps, told members of a subpanel of the House Armed Services Committee that Maj. Gen. Robert Castellvi, who oversaw the ground combat unit that was involved in the training when the accident happened, had been placed on administrative leave last week from his duties as the service inspector general.

At the hearing, lawmakers probed service officials about the results of an internal investigation into the accident that found it was preventable after roughly six months of failures by Marine Corps leadership to uphold training standards and address maintenance shortfalls.

Eleven Marine Corps members in the chain of command have been disciplined so far for their roles in the accident. Review boards are still considering some of them for separation from the service, Thomas said at the hearing.

Castellvi, the commander of 1st Marine Division at the time, was responsible for the initial readiness of the division units forming the ground combat element, Thomas said at the hearing.

In the initial aftermath of the incident, disciplinary action was not taken against Castellvi by the commander of the Marine Corps Forces Pacific, Lt. Gen. Steven R. Rudder, though Rudder found Castellvi was in part to blame for training lapses that led to the accident.

Rudder found in his investigation, which was released in late March, that the AAV platoon had not completed a Marine Corps Combat Readiness Evaluation, which is required to be conducted before a platoon deploys.

The evaluation is designed to provide insight into the effectiveness of the service members to perform their mission, according to the service. Units undergo simulated combat problems, and their performance is observed by evaluators from within the service.