Free to be a better soldier: Transgender service members cheer reversal of ban KABUL, Afghanistan — Maj. Alivia Stehlik’s fears that transgender soldiers would be kicked out of the Army faded Friday as former President Donald Trump’s regulations were overturned. Those who meet military standards are once again allowed to enlist and serve openly.

But the policy change -- announced in March by Defense Secretary Lloyd Austin and taking effect Friday -- won’t erase Stehlik’s memories of how she said she felt while serving as a transgender woman in Afghanistan in 2018, when the White House initiated moves to bar most transgender people from serving.

Trump argued on Twitter that transgender service members’ medical costs were a drain on the military and said they would no longer be allowed to serve “in any capacity.”

But those who worked with Stehlik in Afghanistan said her service was proof that wasn’t true.

“Nobody can argue with her that a trans person can’t deploy and effectively do their job in theater, because she literally just did it,” said physical therapy tech Staff Sgt. Logan Haller, Stehlik’s enlisted partner on her 2018-2019 deployment to Afghanistan.

Senior U.S. lawmakers agreed, with House Speaker Nancy Pelosi saying when the Trump ban took effect in March last year: “No one with the strength and bravery to serve in the U.S. military should be turned away because of who they are.”

Stehlik, a graduate of the U.S. Military Academy at West Point and Army Ranger School who served as an infantry officer, fought against the ban. She advocated for the military to go back to the policy endorsed by then-President Barack Obama in 2016, which lifted a nearly 60-year prohibition on transgender service members serving openly.

“Being trans should never be a thing that limits anyone,” Stehlik told Stars and Stripes in a Facebook messenger call from Fort Carson in Colorado Springs, Colo., where she is now based.

Stehlik started transitioning in 2016 and began hormone replacement therapy the following year. She came out publicly in May 2017 and a few months later, she volunteered to deploy to Afghanistan as a physical therapist with the 1st Stryker Brigade Combat Team, 4th Infantry Division.

She worried about being accepted by her new unit, she said. Haller admitted he had his doubts about whether transgender soldiers would be able to balance their medical needs with deployment to a combat zone.

“One of the big questions that a lot of people had about the whole issue of trans service members was, ‘Are they deployable?’” Haller said. “That was one of the questions I had, too, like, on a personal level … How much sense does that make for the military, and how do we reconcile that with what the Army needs?”

During her deployment to Afghanistan, Stehlik treated about 1,700 troops for injuries. While most of them welcomed her ability to heal them, reduce pain and prevent them from being sent back home, some objected to her being transgender, said Capt. Sara Skiles, an Army social worker deployed to Afghanistan at the same time as Stehlik who traveled with her to bases around the country.

Early in Stehlik’s deployment, for example, some soldiers at Camp Dahlke, about 60 miles south of Kabul, didn’t want to be touched by a transgender physical therapist, Spc. Steven Scott said.

“There were some soldiers who were apprehensive,” said Scott, whose job in an artillery battery included hefting heavy shells, which led to back issues. “Artillery just introduced females a few years ago. So there’s a lot of people in artillery who are not used to working with females, let alone transgender.” Then-Capt. Alivia Stehlik strums a guitar next to a firepit while deployed to Afghanistan in 2018. Stehlik feared she would be discharged from the military during her deployment when the Trump administration banned most transgender troops from serving. (Sara Skiles) 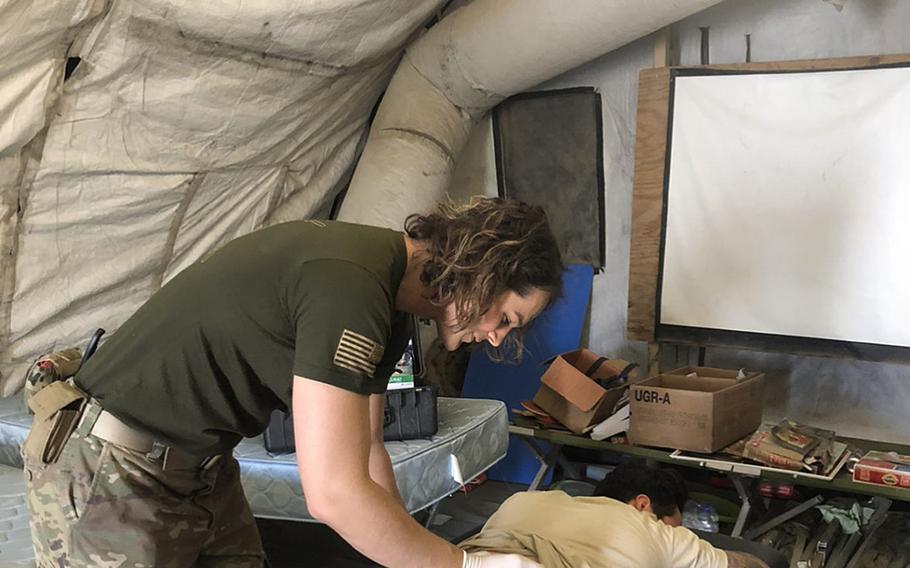 Then-Capt. Alivia Stehlik, a transgender service member, provides physical therapy for a soldier while deployed to Afghanistan in 2018. (Sara Skiles) 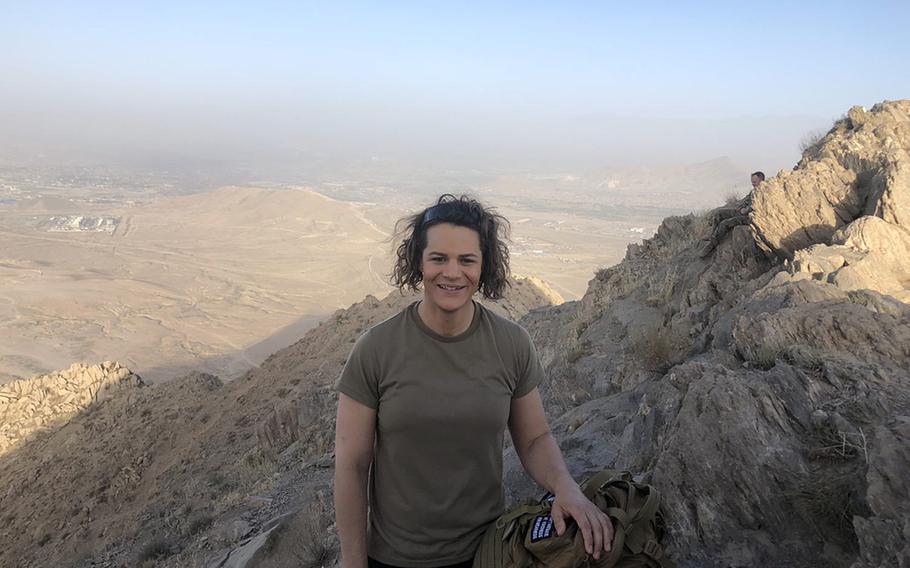 Transgender service member, then-Capt. Alivia Stehlik, poses for a photo in the mountains of Afghanistan during her 2018 deployment. Stehlik traveled from base to base, providing physical therapy to troops during the year she spent in the country. (Sara Skiles) Then-Army Capt. Alivia Stehlik, front row center, stands with other medical staff during her deployment to Afghanistan in 2018. (Sara Skiles) 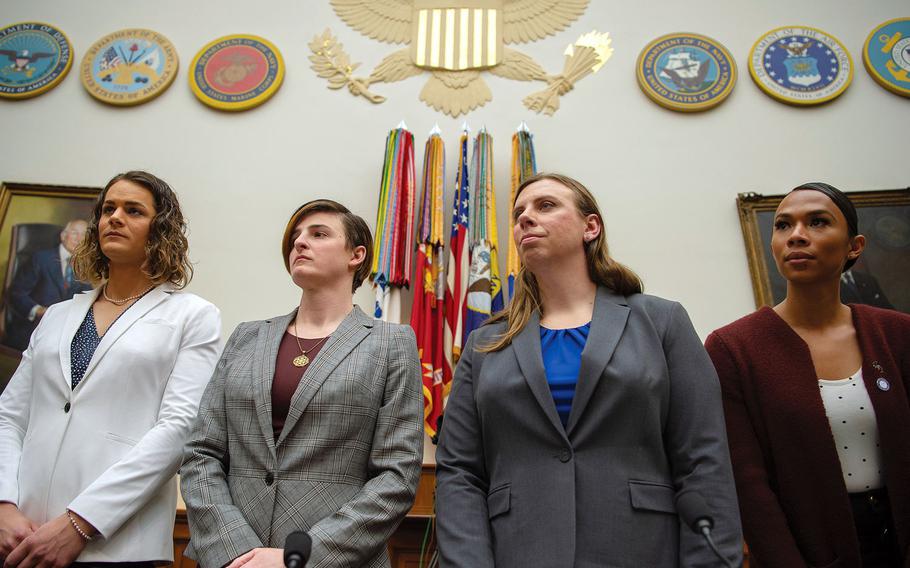 But after Stehlik successfully reduced Scott’s chronic back pain, word of her therapy skills spread. The next time she visited the base, soldiers were lined up, waiting for her to treat them, Scott said.

“She’s willing to step up and do the right thing, even when it’s difficult,” Haller said. “And part of that is treating the people who are maybe a little sketched out by her being trans, or the people who maybe disagree with how she lives her life. She’s still like, ‘I’m here to be a good human and take care of you and do what I can to make you better.’”

The number of service members who identify as transgender ranges from 1,000 to 8,000, the director of military accession policy at the Pentagon, Stephanie Miller, told reporters in March.

A 2016 Rand Corp. report said the estimated 2,450 transgender personnel on active duty would minimally affect military readiness because only a tiny percentage would access transition-related health care each year.

But over the years, transgender service members have suffered discrimination, fought psychological trauma and sometimes been forced out of the military.

Jamie Ewing, who was in Afghanistan as a contractor when Stehlik was there, was kicked out of the Army in 2013 because she was transgender, after serving for more than five years.

Army Staff Sgt. Dianna Nazzal, who was transitioning while deployed in 2018, said she struggled with feelings of worthlessness and fears that she could be sent home as Trump changed policies.

When President Joe Biden announced March 31 that the ban would be lifted, Ewing said she hoped to rejoin the military, and Nazzal urged Congress to pass a law to make military service by transgender people less precarious and subject to constant change.

Stehlik met the two and another trans service member over dinner in Afghanistan. “Working as ourselves in the midst of this political climate … like, whoa, we’re doing the things that people are literally saying it’s impossible for us to do,” Stehlik said. “And we’re here, kind of against all odds, doing great work.”

Stehlik said she was overjoyed and recalled how, as an infantry officer straight out of West Point, she had to pretend to be someone she wasn’t and believed that she didn’t fit in. After coming out and transitioning, she was free to be a better soldier and care for others, she said. Few people seemed to care “that I’m trans or a girl or whatever.”

“They just care that I’m here and I’m a good physical therapist,” Stehlik said. To be allowed to be herself around fellow soldiers, “that was this kind of magical, overwhelming feeling, like, ‘Oh, I do belong here. These are my people.’”