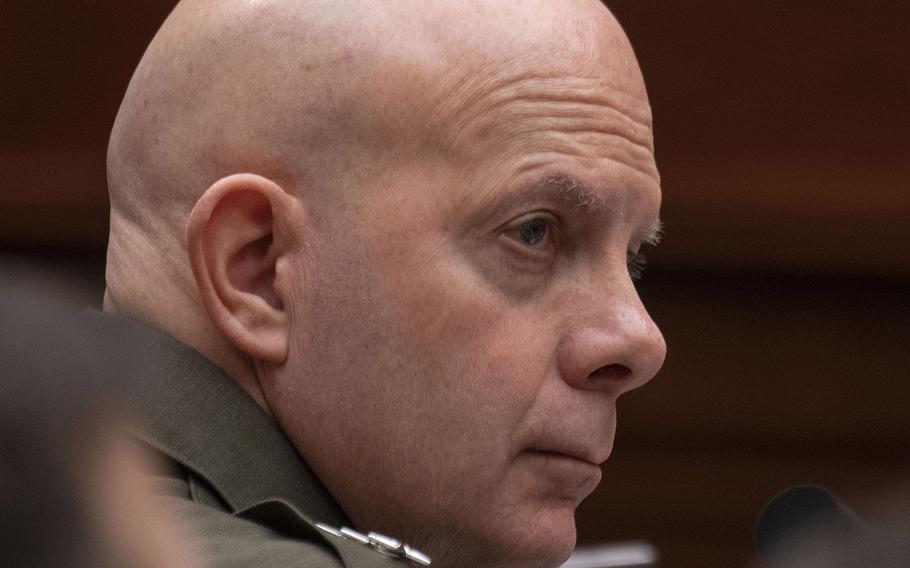 WASHINGTON — The chairman of a House Armed Services Committee subpanel is calling on the Marine Corps commandant to testify in three weeks over a “lack of accountability” within the service following the release of an investigation into a deadly training accident.

The hearing is set for May 3, when Gen. David Berger will answer questions from House lawmakers about why accidents continue to take the lives of service members.

“The brutal operation tempo and lack of accountability by the generals and others in charge of maintaining the safety of our service members during training exercises have led to a severe uptick in preventable deaths,” Rep. John Garamendi, D-Calif., the chairman of the readiness subcommittee, said in a prepared statement.

Garamendi said a recent Marine Corps investigation into a training accident in California that resulted in the deaths of eight Marines and a Navy sailor revealed cracks in safety measures.

The report “found these deaths to be preventable and caused by shoddy maintenance, a lack of safety boats, and a number of commonsense policies that should have already been in place,” Garamendi said.

Berger should expect a “sobering and thorough” review of the Marines training incident at the hearing, the congressman said.

Adm. Mike Gilday, the chief of naval operations, has said his service and the Marine Corps are working together on standardizing their rules for joint operations following the deadly AAV accident last year.

In 2017, the destroyers USS Fitzgerald and USS John S. McCain were involved in two separate, deadly collisions in the Pacific that brought attention to military accidents. Several independent and internal investigations on the rate of military accidents since then have revealed some reasons why these accidents happen.

“We have seen in recent years that in order to pursue modernization initiatives, the services have shortchanged unit manning, flying and training hours, depot maintenance and spare parts. This leaves our operators insufficiently trained and equipment too often unavailable for use [due to] poor material and condition,” Garamendi said in March at a hearing on training accidents.

Lawmakers at the March 24 hearing wanted answers from all the service branches about what they are doing to prevent aviation, ground and at-sea accidents.

“Between 2006 and 2018, 32% of active-duty military deaths were the result of accidents … Even as combat operations overseas have decreased, noncombat deaths have exceeded the number of military members killed in action every year since 2015,” Garamendi said at the hearing.

Thomas said he recognized the Marine Corps’ Class A aviation mishap rate was the highest of all the services from fiscal year 2011 to 2018, as found in a recent National Commission on Military Aviation Safety report. A Class A mishap is when the damage costs more than $2.5 million or an aircraft is lost, according to the service.

But Thomas said the rate has significantly declined since the commission’s report came out in 2018 because of some increased aviation funding, including more money to buy spare parts for some aircraft.

Garamendi pushed for the Government Accountability Office to launch an investigation in October 2019 that analyzed the Army’s and Marine Corps’ vehicle training deaths. The results are expected to be released in the next few months.