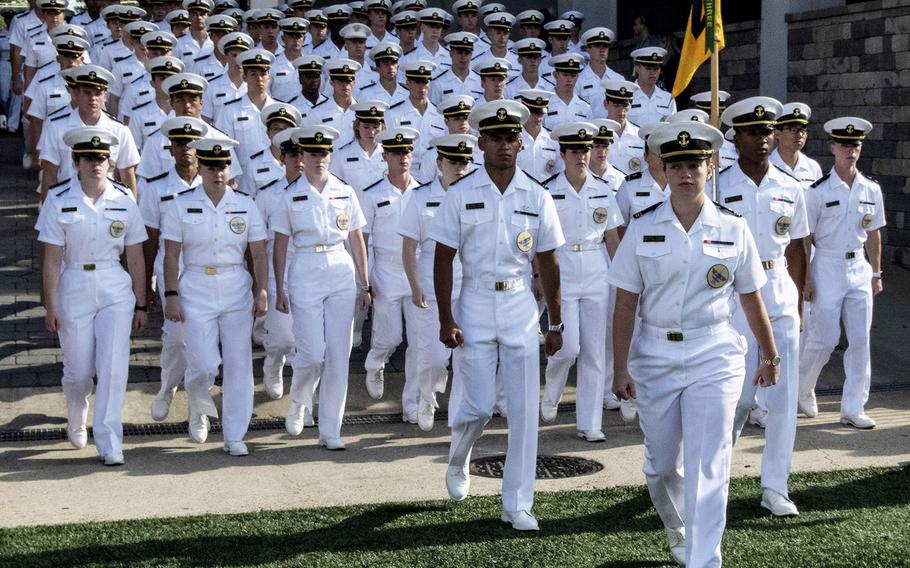 WASHINGTON – Members of Congress nominate white students to military service academies at disproportionately high rates, leading to an underrepresentation of minorities there and among the military’s pool of general officers.

White students received 74% of nominations from lawmakers, despite comprising only 54% of the total U.S. population age 18 to 24, researchers found. Only 6% of the nominations went to Black students, and 8% went to Hispanic students.

Admission to a service academy is highly competitive, and all applications must secure a nomination from a member of Congress or another source, such as the president, vice president, secretaries of each military branch or the superintendents of the academies. Lawmakers account for most nominations – resulting in 60% to 70% of the student populations.

Researchers heard from lawmakers that students of color applied for the nominations at lower rates, contributing to the underrepresentation. However, there is no data available about the races of students who applied. That information is only sporadically collected and isn’t subject to the Freedom of Information Act, said Sarah Purtill, a law student intern at the center.

A measure passed by Congress in the National Defense Authorization Act of 2021 will change that. The Panorama Act requires the Department of Defense to report data on the race, ethnicity and gender of applicants to service academies.

A 2019 report by the Connecticut Veterans Legal Center showed that lawmakers nominated more than three times as many male students as female students.

In the newest report, researchers included a list of recommendations to Congress that they believe would help boost diversity at the academies. They asked that lawmakers reach out to Title I schools, which enroll large numbers of students from underrepresented backgrounds. They also want Congress to require the Defense Department to expand its Junior Reserve Officers’ Training Course program into more Title I schools.

The Connecticut Veterans Legal Center also recommended that the Pentagon allow some lawmakers to nominate more students. The supplementary nominations would be given to lawmakers who are shown to equitably nominate minority students.

“While some congressmembers are making good-faith efforts to promote students of color, the data point to a clear and urgent need for improvement across Congress and in the academy admissions process at large,” Brennan said.

In its report, the center listed the lawmakers in the current congressional session who were doing the best and worst at nominating students who represented the populations of their districts.

The nominations of Rep. Ed Case, D-Hawaii, most closely matched the population he represents, which is 34% Asian or Pacific Islander, 24% white, 16% Hispanic and 4% Black. The nominations of Rep. Alcee Hastings, D-Fla., stray the furthest from the population in his district, which is 59% Black, 25% Hispanic, 13% white, 2% Asian or Pacific Islander.

In the Senate, Sen. Patrick Leahy, D-Vt., most closely matched the population he represents, which is 89% white and 3% Hispanic, 3% Asian or Pacific Islander and 2% Black. The nominations of Sen. Ted Cruz, R-Texas, depart most from his district, which is 45% Hispanic, 34% white, 13% Black and 4% Asian and Pacific Islander.

As a result of the discrepancies, minority students don’t have equitable access to the academies and the opportunities they present, the report states.

The consequences extend past the academies and into the military, said Richard Brookshire, executive director of the Black Veterans Project.

“Beyond the academy walls, these disparities are compounded: Black soldiers and sailors are overrepresented in the enlisted ranks and underrepresented among general officers,” Brookshire said. “And over one-half of service members of color have witnessed evidence of white supremacy or racist ideologies in the military.”

Sen. Kirsten Gillibrand, D-N.Y., said in a statement Wednesday that she supported changes to the nomination system. Gillibrand was a sponsor of the Panorama Act that passed through Congress in January.

“Our nation’s service academies cultivate exceptional officers, but we must do more to ensure they reflect our country’s diversity,” she said. “[The] congressional nomination system must be refocused to strengthen the diversity of our service academies. I will keep working until every student has an equal chance to serve, regardless of race, gender, or socioeconomic status.”